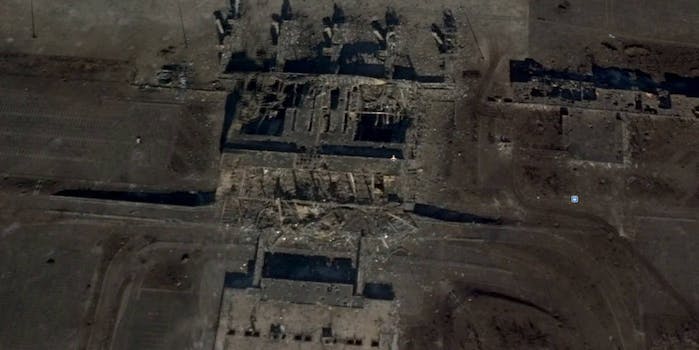 Beginning in 2013, a revolution and prolonged civil war enveloped Ukraine. Ukrainian nationals in the west and pro-Russians in the east clashed first in Kiev and then throughout the country in a conflict that began on charges that Russia and her allies were preventing Ukraine from moving closer to Europe through corruption, violations of human rights, and abuse of power.

One of the most deadly and iconic battles of the Ukrainian crisis took place at Donetsk Airport in Eastern Ukraine. Surrounded by pro-Russian separatists, the new Ukrainian government worried that the airport could be used by the Russian government to supply their allies in the war-torn country.

Fighting raged over the airport for almost a full year, leaving hundreds dead and the facilities mostly unusable.

Reddit user GlaringLizard recently discovered Google Earth‘s archives of the airport, which help illustrate just how devastating a fight this was.

Here’s what the airport looked like on March 6, 2013, months before any of the fighting began. 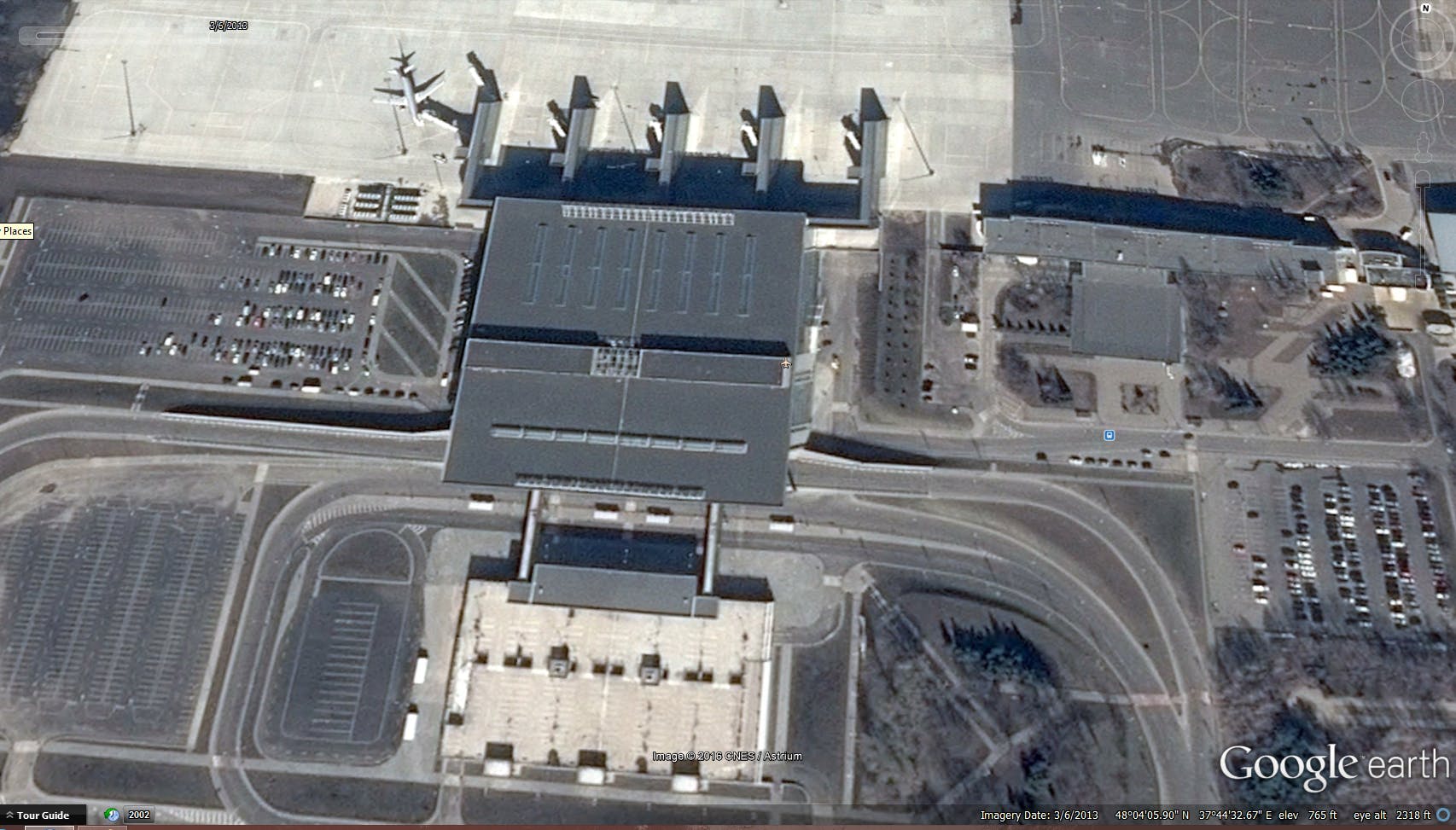 The next update comes from May 29, 2014. This photo comes just two days after the First Battle of Donetsk Aiport. It’s a much grayer, emptier place now. There are fewer cars and the main building is scarred from the fighting.

Dozens had died in the airport in the days prior to this photo being taken. The result was a Ukrainian victory. 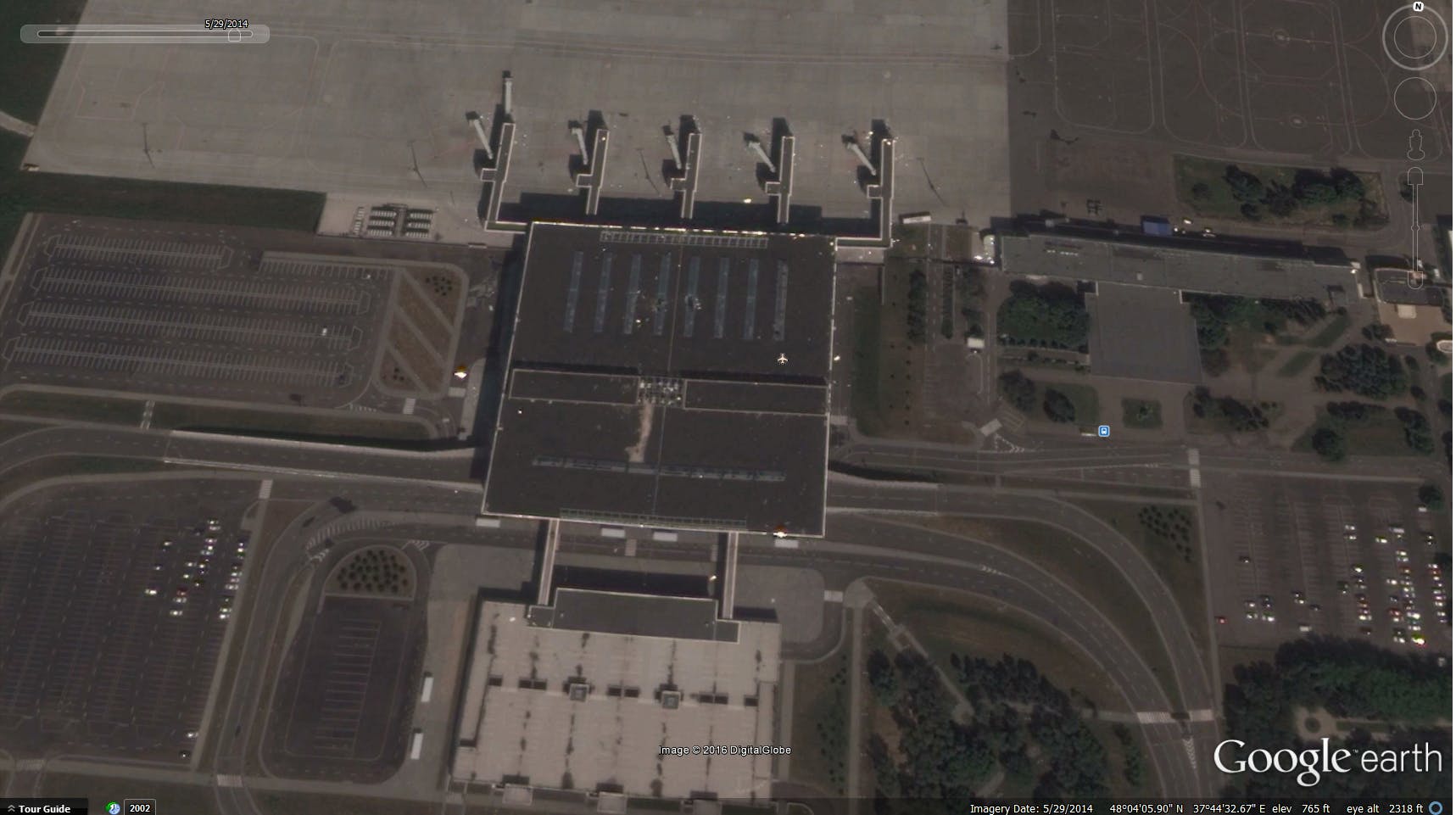 By July 23, 2014, the airport looked devoid of life. The main terminal and its roads were cratered in, and the roof’s increased scarring give a hint as to what happened on the ground level.

More intense fighting was just around the corner. Nearly every civilian vehicle was gone—some poor guy’s silver sedan was still parked in the top left lot—showing the imminent surge of violence was no secret. 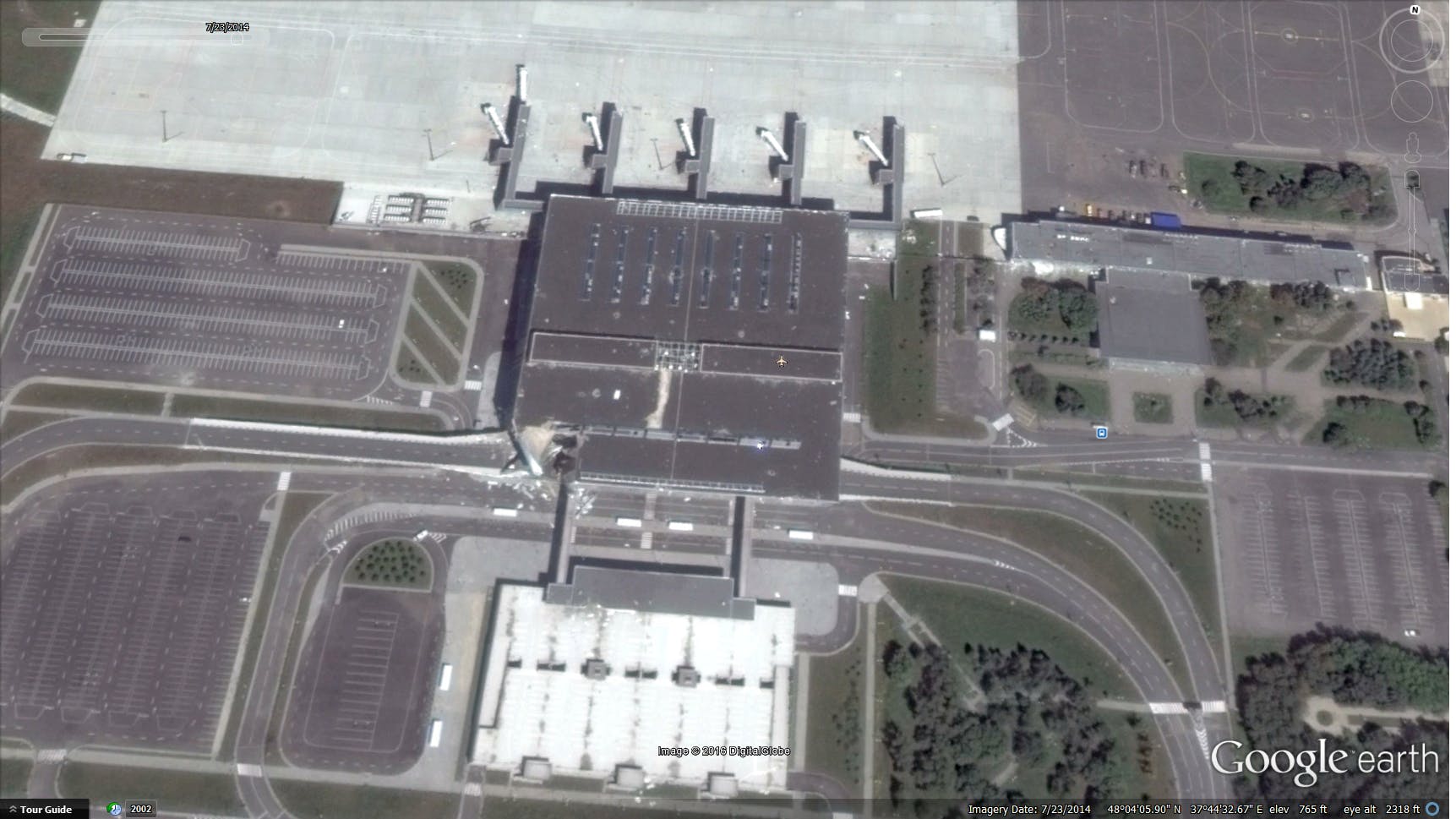 The Second Battle of Donetsk Airport resulted in almost 900 deaths and hundreds of more casualties. The following photo was taken on Sept. 29, 2014, just a day after the start of the second battle. The intensity of the fighting is easy to see. 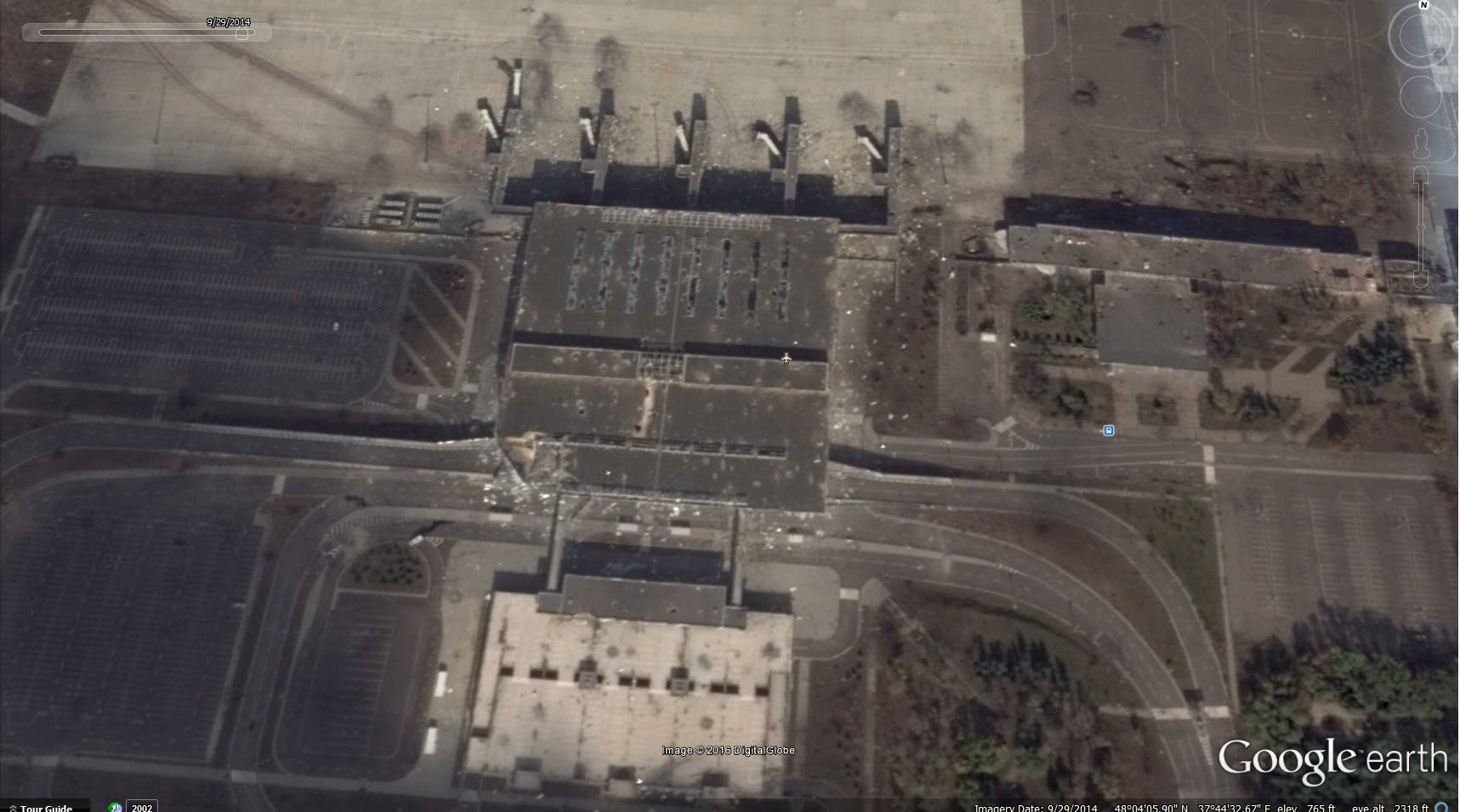 The scale of the fight was bigger. The post-revolution Ukrainian government and the eastern separatists poured hundreds of fighters into the area. Combat raged day and night. Videos of the fight flooded online, and the Ukrainian soldiers became national heroes for their ability to fend off enemies despite little sleep or supplies.

A month later, on Oct. 10, 2014, the devastation was everywhere. The place seemed on the verge of collapsing into the earth. 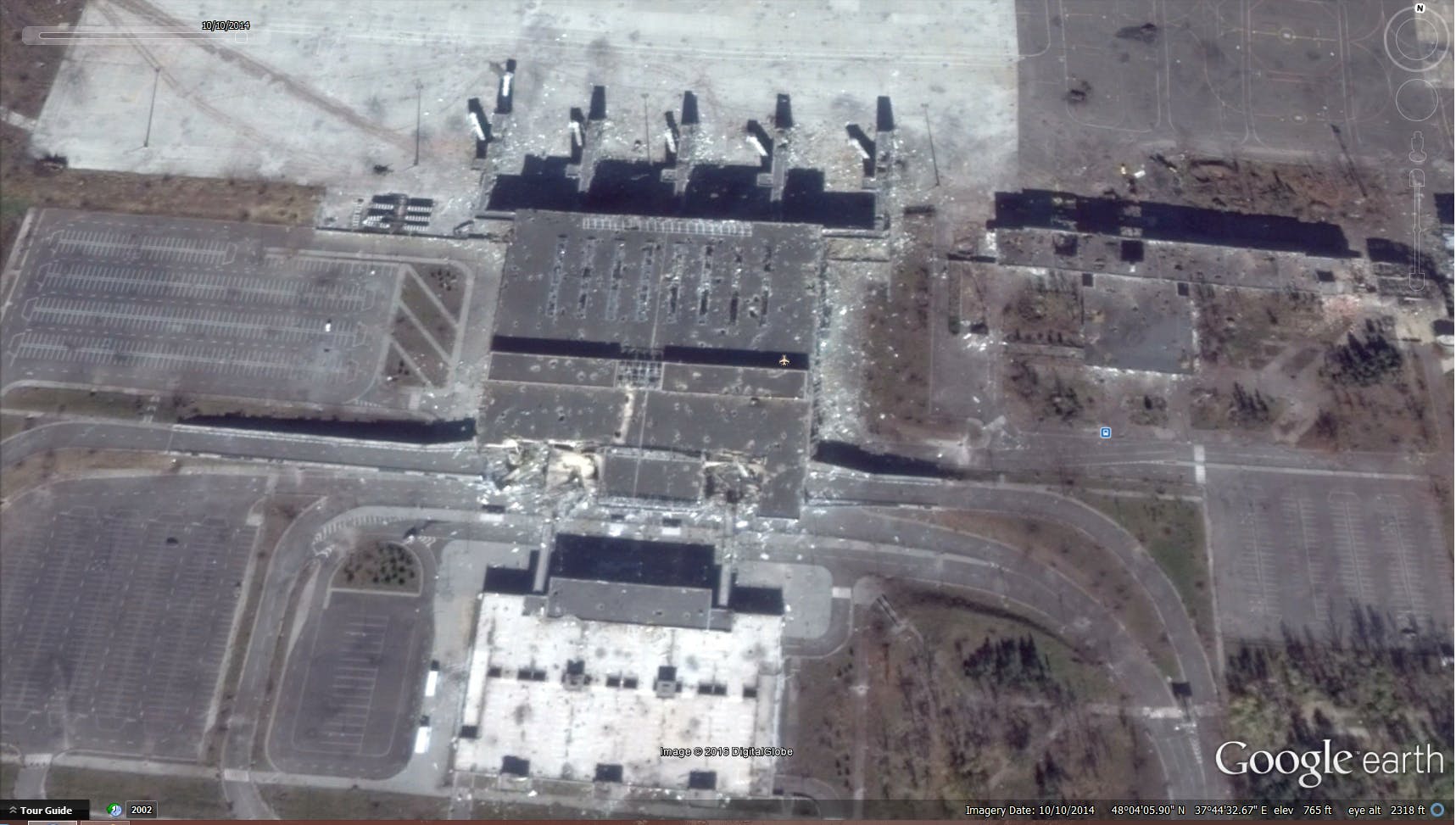 By early 2015, the ongoing battle at Donetsk Airport was a worldwide phenomenon. The bleak hellscape was a point of national pride, worry, and symbolism in Ukraine.

With so many months gone by and bullets spent, it was becoming increasingly apparent that no one could use this airport. So why was it being so desperately defended at the cost of so many lives?

Separatist forces captured the airport on Jan. 21, 2015. The following photo was taken on Feb. 20, 2015, showing the shattered prize they’d won. Notice in the top-left parking lot, that silver sedan was still parked and waiting. 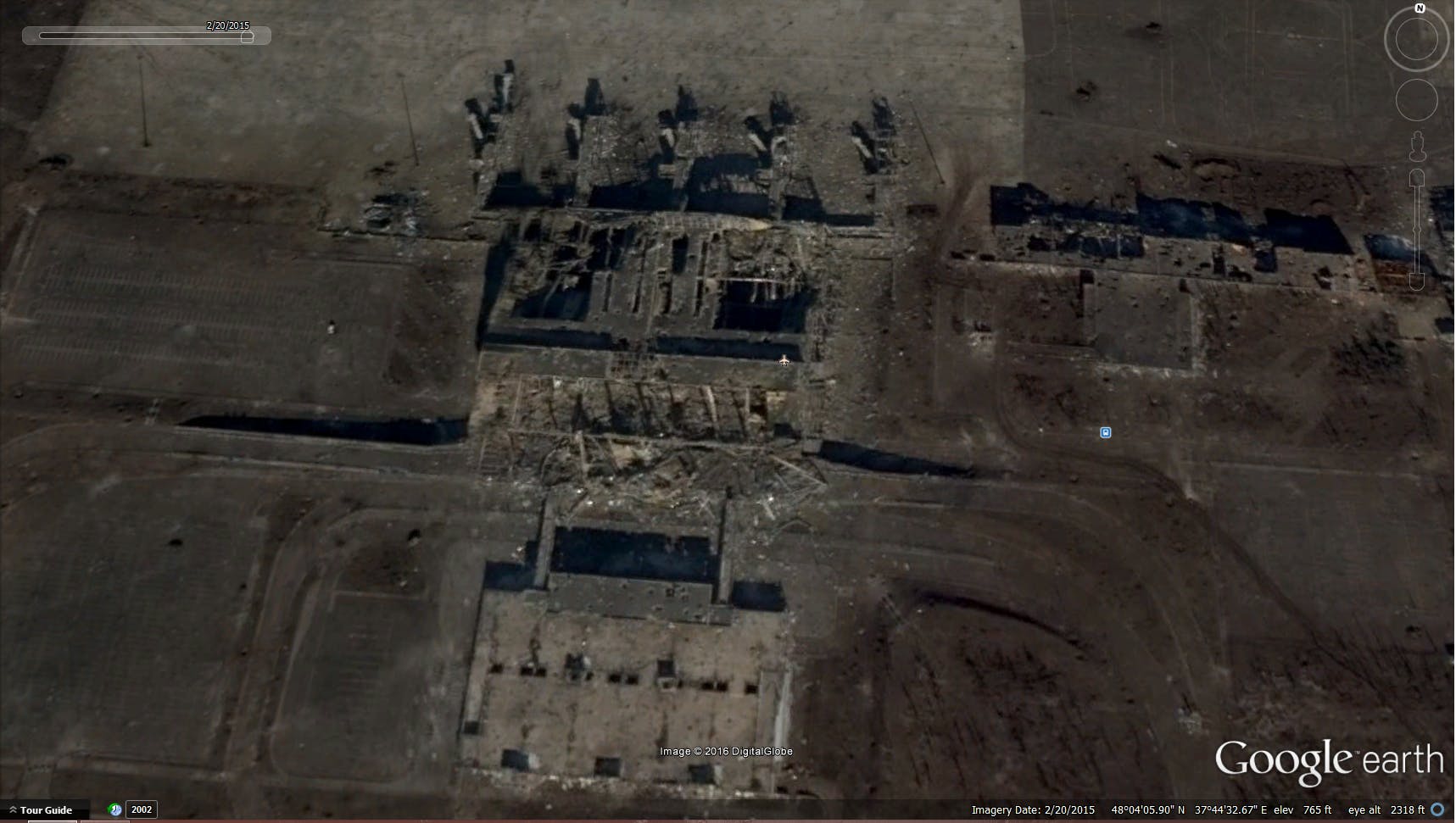 For a view from the ground, here’s a short documentary released by Vice last year, just after the battle concluded. It showcases up close just how thorough the demolition of Donetsk Airport was after almost a year of full-scale war.