Sprucing up the buildings home to endless amounts of personal information.

Google’s large, banal structures that store endless amounts of personal data are getting a makeover.

Whether it’s photos, messages, or the tech that powers our communications, all of it is stored in “the cloud” and in large data centers around the world.

The cloud is a bit of an esoteric term that some people struggle to grasp. There’s not actually a cloud or other floating mass above us that sucks up our private information; storage centers like Google’s massive, ominous facilities are where our data lives.

To better educate people about these facilities and create a more welcoming environment in the communities where they live, Google created an art project, recruiting local artists at facilities around the world to paint the outside of the buildings.

Called the Data Center Mural Project, Google hired four artists to make murals that represent what goes on inside the buildings—the “heart of the internet,” the company calls it—outside the buildings. Artists worked with Google engineers to understand the infrastructure and create projects that take bits of the technology and pair it with the local community.

“Because these buildings typically aren’t much to look at, people usually don’t, and rarely learn about the incredible structures and people who make so much of modern life possible,” Joe Kava, vice president of Google Data Centers said in a statement. 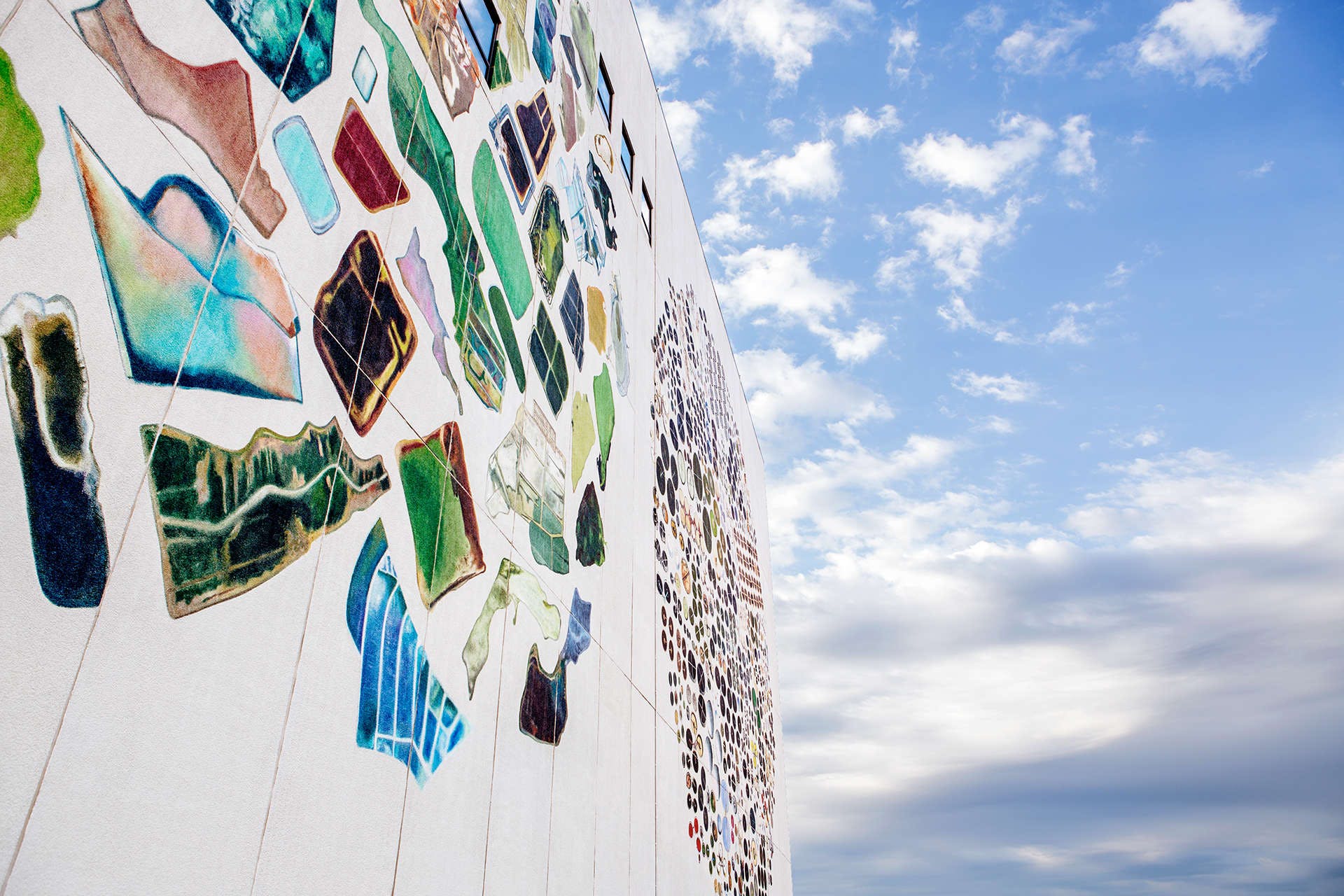 On the Data Center Mural project website, Google highlights both the artists as well as some of the individuals who work in the data centers, bringing a human connection to the obscure ideas of the cloud and data storage. It’s a kitschy move to brighten up the otherwise dull and perhaps somewhat creepy buildings that store and send massive amounts of data. Google is putting a fresh coat of paint on the fact that it knows, quite literally, almost everything about you.

If you use Google Maps, the company knows where you live and work and where you often travel. If you use Gmail, it knows with whom you correspond, where you shop online, and your calendar appointments. And when you search, Google slurps up all that data—like political affiliations, film or TV preferences, your favorite sports teams—and stores it for advertisers, turning you into a data point making money for the company.

So far, two completed murals can be found in Mayes County, Okla. and St. Ghislain, Belgium. On the outside of Oklahoma’s data center, artist Jenny Odell painted collages made up of satellite imagery from Google Maps, reflecting different types of infrastructure. Brussels-based artist Oli-B created abstract murals representing “the cloud” and all that’s stored inside it.

In Ireland and Iowa, two more data centers will receive a paint job. In Council Bluffs, Iowa, artist Gary Kelley aims to represent the frontier spirit of the state and marry the technological advancements of the 19th and 20th centuries. In Dublin, Ireland, Fuchsia Macaree is creating a piece to demystify the internet and incorporate familiar scenes around the city.

With a makeover, Google’s buildings ingratiate themselves within the community, and hopefully they will help better educate people on the idea of the cloud. Perhaps with a little more interest in how the internet and data storage work, people will better understand just how much information and privacy they give up to companies on a regular basis.