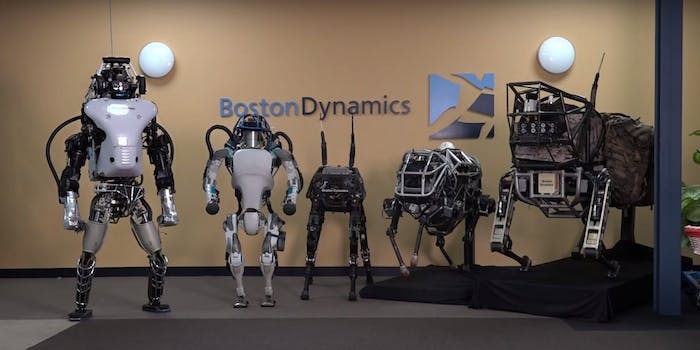 Have a couple billion laying around?

Just over two years ago, Google bought robotics lab Boston Dynamics. In that time, it has seen things that it cannot unsee. The burden is too much, and the company is now selling off what will surely be the bringer of humanity’s demise.

Bloomberg is reporting, citing anonymous sources, that Google’s parent company Alphabet is ready to exit the robotics business for the time being.

The report speculates that Alphabet executives are placing a new emphasis on generating revenue, and that the projects at Boston Dynamics—attention-grabbing as they may be—are not likely to produce a marketable product in the near future.

Apparently, there aren’t many people in the market for terrifying robotic monstrosities.

When Google initially acquired Boston Dynamics in late 2013, the company was in the midst of a major investment in robotic initiatives, including hiring 300 robotics engineers. But Boston Dynamics executives were reluctant to work with Google’s own engineers, and the groups never meshed.

That doesn’t mean Google has nothing to show for the purchase, though. Videos of Boston Dynamics robots have regularly amazed and startled people with their technological breakthroughs.

The most famous bot born in Boston Dynamics’s lab is the quadrupedal BigDog. More recently, the company unveiled the bipedal Atlas, which managed to balance itself while walking and withstand a fate-tempting hockey-stick assault from one of its creators.

Bloomberg reports that potential buyers for the robotics firm include Amazon and the Toyota Research Institute. It will likely come down to which company is more comfortable uttering the words of Robert Oppenheimer: “Now I am become Death, the destroyer of worlds.”