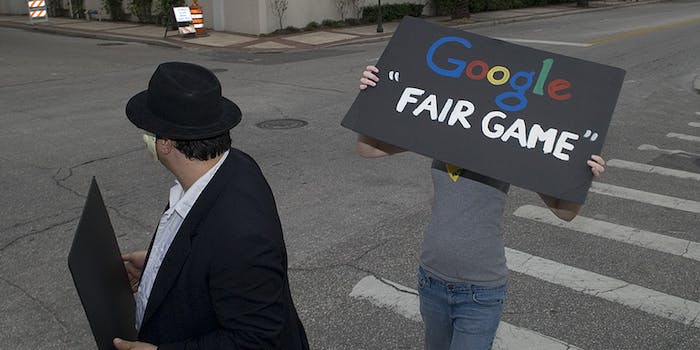 Careful what you search for.

A cautionary tale: Back in 2009, government contractor Jeffrey Kantor was browsing online, seeking to make a radio-controlled airplane for his son. He began to type his search into Google: “How do I build a radio-controlled”—[enter autocomplete]—”bomb.” That’s right, before Kantor knew it, he had accidentally asked Google how to make an explosive device. And his life would never be the same.

According to a suit filed in federal court this week by Kantor and as Gawker reported, after his Google autocomplete mishap, the government began harassing Kantor, putting him under constant surveillance and ultimately getting him fired.

“Kantor’s coworkers at the Army,” the complaint alleged, “including Northrop Grumman contractors … would repeat back Kantor’s private information, including emails, websites he went to, library books he got from the library, conversations he made in his house or in his car, phone calls, information about the contents of his house, and then someone would immediately say that there is a person who dropped dead from hypertension.”

To be sure, this is all what Kantor alleges. Nothing has been proven. And one has to wonder, could an autocomplete error on Google actually prompt years of harassment and, as Kantor claims, death threats?

Hindsight provides some context for how this might have occurred. In June of 2013, former intelligence contractor Edward Snowden began disclosing the massive online surveillance operations of the National Security Agency and other international intelligence outfits. We now know the agency collects American’s telephone metadata, taps Internet cables, tracks cell phone locations, collects emails, browser histories, encrypted messages, and chats. Further, the guidelines for what legally makes one targetable are vague and flexible. Conceivably, Kantor was monitored by one of these programs.

One important note, however, is that no leak has revealed that the NSA directly monitors the browsing of American citizens. If the government isn’t engaged in any such program, it’s difficult to imagine how exactly Kantor’s story would come together.

On the other hand, if in fact Kantor’s claims are accurate, they provide a compelling case against the NSA’s argument that those with nothing to hide have nothing to fear from government surveillance. In fact, the uncertaintly surrounding these claims is itelf in part the issue. As the American Civil Liberties Union wrote: “In fact, you have no idea if you have something to fear or not, because you do not know what the government does with the data it collects. If the government keeps secret what it is collecting about you or why, you cannot correct potential errors. And if you know anything about our justice system, you know that errors are common.