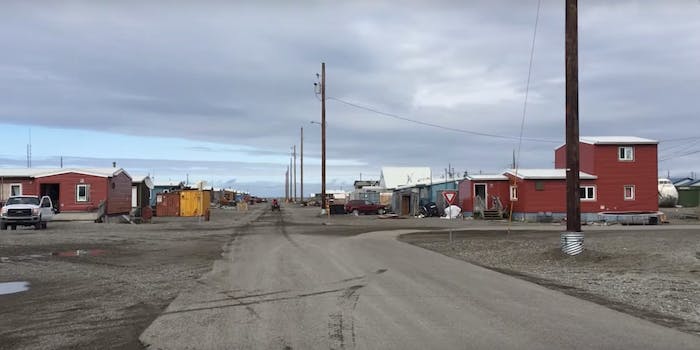 Thanks to global warming, this remote Alaska town will have internet

The nation's most northern residents will soon have some of the fastest broadband speeds.

As Arctic ice recedes, snow-loving animals are scrambling to find safe homes and food, and sea levels are slowly rising. Global warming could spell doom and gloom for life on this planet as we know it. But there does seem to be one benefit coming from all the melting ice—it’s bringing internet to a remote Alaskan town.

Receding ice is revealing new passageways that boats can sail through, and a company called Quintillion is using the opportunity to lay down high-speed internet cables with the aim of creating a faster digital connection between Tokyo and London. In the process, it’s giving internet access to northern townships. Point Hope, Alaska, is one village benefiting from the endeavor, the New York Times reported Saturday.

Point Hope is along the route being used by Anchorage-based Quintillion as it lays down undersea cables over the next few years. The town is 700 miles north of Anchorage and so remote that food staples have to be flown in by air.

For the mostly native Alaskan community, the new access to broadband internet could offer better access to education and healthcare. Local craftspersons will also be able to sell their wares online, and local storefronts will be able to order supplies more easily. The addition of high-speed internet access in Alaska’s northern reaches could also bring more business to the area, such as new research centers and data centers, as well as oil and mineral exploration that wasn’t possible before.

Thanks to partnerships with local telecom companies, Point Hope and other northern Alaskan towns will soon boast some of the highest internet speeds in the country: up to 25 gigabytes per second. For other areas that already had internet access, the new lines will offer the chance for higher download speeds.

Point Hope residents have mixed responses to the increased connectivity, the Times reported.

“The internet makes people impatient for everything. This is not our way of life,” said Steve Oomittuk, a whale hunter whose family has lived in Point Hope for generations.

Many others said they look forward to the business opportunities that internet could bring.

“The trigger to all of this is lower-cost broadband that will bring a whole new economy and hope to places like Point Hope,” said Jens Laipenieks, president of the Arctic Slope Telephone Association Cooperative.

Head over to the Times for the full story.