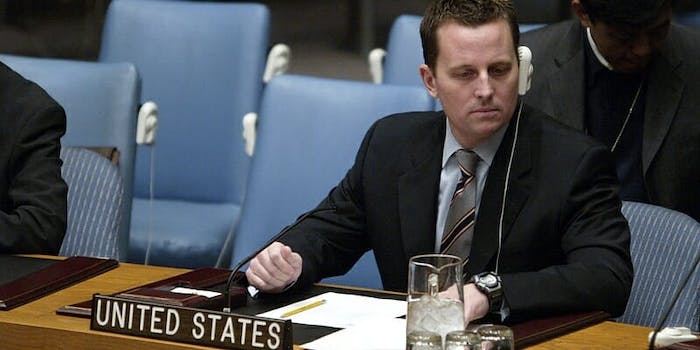 'At least the Russians make an effort not to be seen to be meddling in other countries’ affairs.'

German lawmakers are angry at President Donald Trump’s newly appointed ambassador Richard Grenell who, in a recent interview with Breitbart News, said he hoped to “empower” right-wing movements across Europe.

“There are a lot of conservatives throughout Europe who have contacted me to say they are feeling there is a resurgence going on,” Grenell told the publication at the weekend.

“I absolutely want to empower other conservatives throughout Europe, other leaders. I think there is a groundswell of conservative policies that are taking hold because of the failed policies of the left.”

The ambassador went on to praise the new Austrian chancellor Sebastian Kurz, who he said was “a rock star.” Kurz’s conservative Austrian People’s Party formed a coalition government with the far-right Freedom Party (FPÖ) in December and he has since taken an extremely hardline anti-immigration stance.

U.S. Senator Chris Murphy (D-Conn.) blasted the interview as “awful” and made a point of contacting the Grenell privately.

When I raised concerns to Grenell about politicizing this post, he personally assured me that once he became Ambassador he would stay out of politics. This interview is awful – Ambassadors aren't supposed to "empower" any political party overseas. https://t.co/i8oOhqEk5k

German politicians were already outraged, and reacted to Grenell’s comments with disgust and questioned the ethical implications of the comments.

“As a member of the SPD, a left party with a long proud legacy of fighting, together with the United States, both Nazis and communists, I am irritated to hear from ambassador Grenell about our allegedly failed policies,” said Metin Hakverdi of the Social Democratic Party of Germany.

Other politicians, including a representative of the German foreign ministry, demanded that Breitbart authenticate the comments and that, if real, the ambassador be asked to “explain what he meant” in his visit to the ministry buildings on Thursday.

One member of parliament joked that, unlike Grenell and his overt biases, even the Russians had the self-awareness to hide their hyper-partisan and meddling agendas.

“The comments made by Richard Grenell give the impression that the new U.S. ambassador still hasn’t adjusted to his new role,” said Omid Nouripour, a Green Party MP who sits on the German-U.S. parliamentary group. “At least the Russians make an effort not to be seen to be meddling in other countries’ affairs.”

“The U.S. ambassador represents the American people, not just the readership of Breitbart,” he continued, of far right anti-establishment outlet the ambassador had given his time to. “That’s why it is important that he conducts himself as neutrally as possible.”

In a tweet on Monday the ambassador clarified that he would not be supporting individual candidates or particular political parties but that the weekend’s comments were a nod to the surge in support for right-wing populism seen in Europe in recent years.