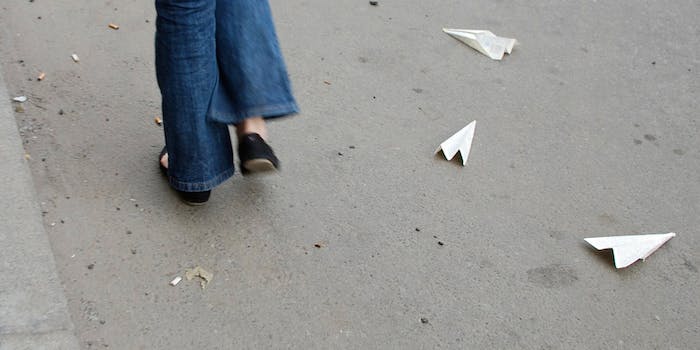 I downloaded Fling early in the morning the day of its release. While sipping my coffee, I laughed at the idea of an anonymous messaging app that randomly sends any user’s message to up to 50 different recipients, mainly because the idea is pure insanity. Why would anyone actually want to chat with a bunch of total strangers? But I was curious, and the app had gotten some buzz, so on I downloaded.

And very quickly, I realized why people would love Fling. And then, just as quickly, I discovered just how easy it is to ruin a good thing (and how fast it can happen).

But before anything was ruined, Fling reminded me of something: People are awesome, for the most part, which is something I might have forgotten in my jaded late 20s. There are lots of amazing people out there that you and I have never met, and an app that puts you in touch with those people is actually a very special thing.

In the month since Fling has been available, I’ve spoken to dozens of great Flingers from all walks of life and from seemingly every corner of the globe.

I talked to Zoey from Scotland, who just got a new puppy. When she found out I was from the U.S., she said she’d always wanted to visit, but money’s tight thanks to her husband’s recent job loss. I told her that I hoped they’d get back on their feet soon, and that if I ever won the lottery I’d invite them to visit.

I chatted with Dean from Montana who works on a ranch with amazing views. He sent me a photo of a perfectly flat field so massive I’d have thought it was fake if I hadn’t gotten two more pictures within the next five minutes. We talked about football and whether Montana or Wisconsin has worse winters. We decided Wisconsin wins.

Sophie, who was visiting Dubai on business, sent me a photo from the 63rd floor of the JW Marriott Marquis. Despite viewing it on the relatively small 4-inch screen of my iPhone, the photo gave me a sense of vertigo.

I was so caught up in the cool people I had been meeting that I had almost forgotten the reason for my initial apprehension: There are a lot of horrible human beings out there.

That’s when I met Mikey.

Mikey was the end of my honeymoon with Fling. Here’s what I received in a message from Mikey: 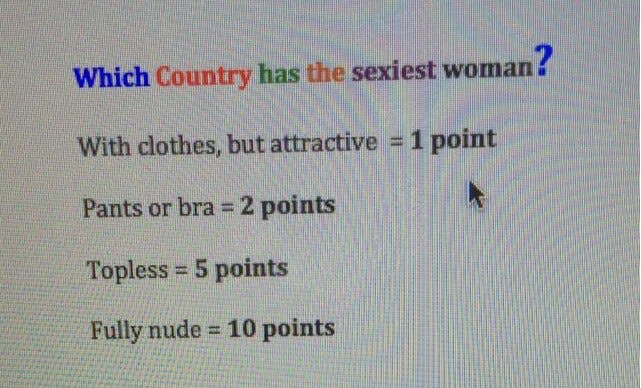 I didn’t think much of it at first. A stupid “survey” he had typed up on his computer, taken a photo of, and sent out the world. Nobody would really fall for that, right? Sure, a rare woman here or there might be willing to show their boobs for something so pointless, but surely not enough to create a trend. That’s what I told myself.

I still think I’m right, but what I didn’t anticipate was that the type of photo that Mikey introduced me to would trick men far easier than it would trick women.

When men began to see messages like Mikey’s appear randomly in their Fling inboxes, something happened. The titillation molecules flew from their iPhone screens, cruised through their soft, gooey eyeballs, and landed squarely on their jealousy gland. Their brains began whispering things to them—convincing them that another man was seeing things that they themselves weren’t allowed to.

And then the avalanche hit. Within two or three days of receiving Mikey’s message, the number of pathetic “surveys” skyrocketed. Each had its own bit of added flavor. One claimed it was the sender’s birthday, while another was hand-written with tiny, poorly-drawn boobs all over it. One guy even tried to suggest it was a really important college project, crucial to his grade.

They key evolution across virtually all of them was that they all came complete with entries from what we are to assume to be the previous time the survey was sent out. 10, 20, or as many as several dozen ladies apparently displayed various parts of their bodies so that their country could be well-representede, (numbers that were, of course, very likely fabricated).

I began to reply to every one of these posts that fell into my hands, asking if it was real and if anyone had ever really responded. After two dozen brief interrogations, I received a total of three replies. The first said simply “What?” and that’s where the conversation ended. The second asked if I was “a chick” or not. I said I was a guy, but that I was just wondering. I got no further reply. Then there was Bufmann. Bufmann’s survey was a well-designed spreadsheet affair, and while it was clearly photographed from a computer monitor, it actually looked pretty well-made. “Nah, man,” Bufmann admitted, when I asked if his research was real. “I seen another guy do this.”

Fling isn’t nearly as much fun to use as it was during the first week. Aside from the bugs that have plagued it from its initial launch, the number of normal, curious people has fallen off quite sharply.

I don’t know if there’s a solution to this problem. You can report inappropriate messages, but it’s not clear if soliciting photos fall within the guidelines of a bannable offense. And before you even think it, this isn’t some “not all men!” plea: I just really loved this app, and met amazing people, and now it’s full of this garbage.

The only thing that’s clear at this point is that these ridiculous bros—or douchebros, if we’re going to sub-classify them—are destroying everything that was great about a very promising social experience.