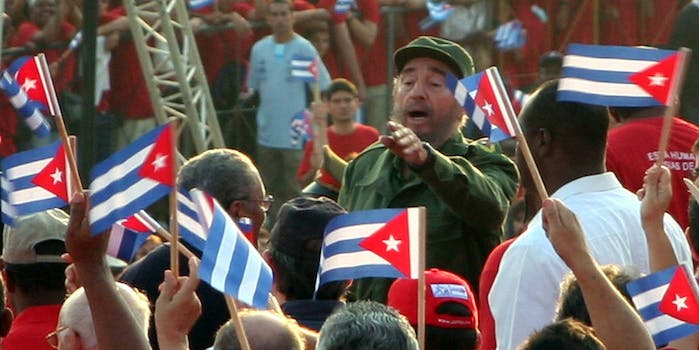 Twitter laughs at CNN’s Fidel Castro obituary, but the mistake is understandable

Fidel Castro actually outlived one of his obituary writers.

With the death Friday of longtime Cuban leader Fidel Castro, much of Twitter took to celebrating the 90-year-old dictator’s demise. And then on Saturday, much of social media laughed at CNN’s obituary—and the obvious, yet understandable mistake that was missed by a presumed copy editor rushing to get the story online as soon as possible.

When you've lived so long @CNN has your obit full of notes on future deaths. #Castro pic.twitter.com/2iM78Tp9Nr

Looks like @CNN neglected to edit out the note in their pre-written Castro obit. H.W. is still kicking it, fam. pic.twitter.com/xMEyTMeAkB

CNN naturally wasn’t alone in having its Castro obituary ready to publish as soon as Castro’s death was confirmed. As Slate wrote in 2009, this is the way of the industry. From that article, here’s how newspapers could decide whether to pre-write an obit:

But news organizations prepare so-called “advancers” in one of three situations: The subject is so famous that the paper would be embarrassed not to have an immediate package in the event of an untimely death; the subject is old or sick; or the subject is “at risk”—i.e., he’s a drug addict or a stunt biker. The first category is rarified: world leaders such as Barack Obama or Gordon Brown. The second category includes Sen. [Ted] Kennedy and other figures over the average life expectancy of 75 or 80. (Even before Kennedy announced that he had brain cancer in May 2008, newspapers were preparing obituary packages.) Likewise, TheNewsHour With Jim Lehrer had an obit ready for Pope John Paul II a full two years before his death. Into the third category fall stars like Michael Jackson and Britney Spears. When Jackson died at 50, the Los Angeles Times already had an obituary ready because he had a spotty health record. In 2008, when Spears’ antics were regularly featured in the tabloids, the Associated Press prepared her obituary despite the fact that she was only 26 years old.

As for how many “advancers” newspapers keep in their possession, the New York Times said it had 1,200 ready for publication (at the time of the 2009 Slate story, the oldest had been penned 27 years earlier). In this 2014 Nieman Lab piece, the Times’s number was set at 1,700. Meanwhile, the Washington Post reportedly had 150 in its vault.

Wrote Slate: “Occasionally, this practice leads to embarrassment. Advance obituaries sometimes slip out, like when CNN mistakenly posted mock-ups of its obituary page for Dick Cheney in 2003. In 1998, the Associated Press mistakenly reported Bob Hope’s death, which was then announced on the Senate floor. Other times, the subject outlives the author: By the time Gerald Ford died in December 2006, his obituary writer had been dead for 11 months.”

That was also the case for at least one of Castro’s obituary writers.

Of the 4 bylines on the NYT, LAT and WaPo Castro obits, only one still works at the paper where it was published. Another has himself died.

According to Quartz, that deceased writer was former Washington Post reporter J.Y. Smith, who died 10 years ago.

As for the Miami Herald writer who penned Castro’s obituary, it’s been an extraordinarily long process from first typing it to seeing the story in print.

Originally written in 2001, but updated many times in the years since. Thanks for kind words! https://t.co/KDFys1Q3Jm