This is how the city descended into chaos, from someone who was there.

Yesterday, Ferguson was a community in mourning. Today, it is a city in revolt.

For weeks, the word “justice” weighed on the minds and lips of so many of Ferguson’s residents. As they waited in anguish to learn the fate Ferguson Police Officer Darren Wilson, some had held out on the hope that justice would come from the grand jury’s decision to send Mike Brown‘s killer to trial to make his defense in a court of law.

Mike Brown’s mother heard the news of the grand jury’s “no” verdict enveloped by a crowd of a thousand assembled in front of the Ferguson Police Department. At 11:15pm, she friends and family hugged her while a radio brought the announcement from a car with a half dozen people standing atop it. “They want him back in Ferguson, but I can’t get nobody back?” she said to the crowd, as calls rang back, “We’re with you!” “We love you.” Tears streamed down her face. “Why, lord, why?” she wailed before being led away, a sea of bodies and cameras parting to let her pass.

In the quiet Ferguson neighborhood of Canfield, a mood of somber contemplation hung quietly in the chilly air. A memorial to Mike Brown adorned the middle of the street, covering the spot where his body lay for 4½ hours in the hot summer sun on Aug. 9. On the block where he lived, his neighbors remembered him in vigilant silence, as they had for the 108 days since his death.

“This is where it all began. This is a community in mourning,” said Sapphire Taylor, a resident of the Canfield Apartments. “Ferguson became a symbol of the racism that still lives in this country—but at its heart, this is really about a family that is going through a terrible, terrible loss.”

“This is where it all began. This is a community in mourning.”

At the Ferguson Police Department, the vigil of remembrance manifested first in a stunned pause—and then, furious reaction. After lying dormant through the slow and agonizing anticipation, fixated on the justice system’s morose dirge, Ferguson’s anger erupted.

They knew this was coming. They expected it. Organizers even made a website at noindictment.org and planned to “shut the city down” in anticipation of the grand jury’s decision. Dozens of journalists swarmed the city, some more than two weeks ahead of the announcement to point their cameras at agitated residents and sound a droning harbinger of another outbreak of the violence seen in August.

What they didn’t expect was that police would be wholly unable to handle the situation in any kind of responsible or successful manner.

Despite thousands of dollars in new weaponry, backup from the National Guard, and the “five thousand hours” of training the Governor Jay Nixon said that the county’s 1,000 officers had managed to go through since August—the upheaval that came was worse than in August, and the forces of order utterly failed to quell or contain its wrath. 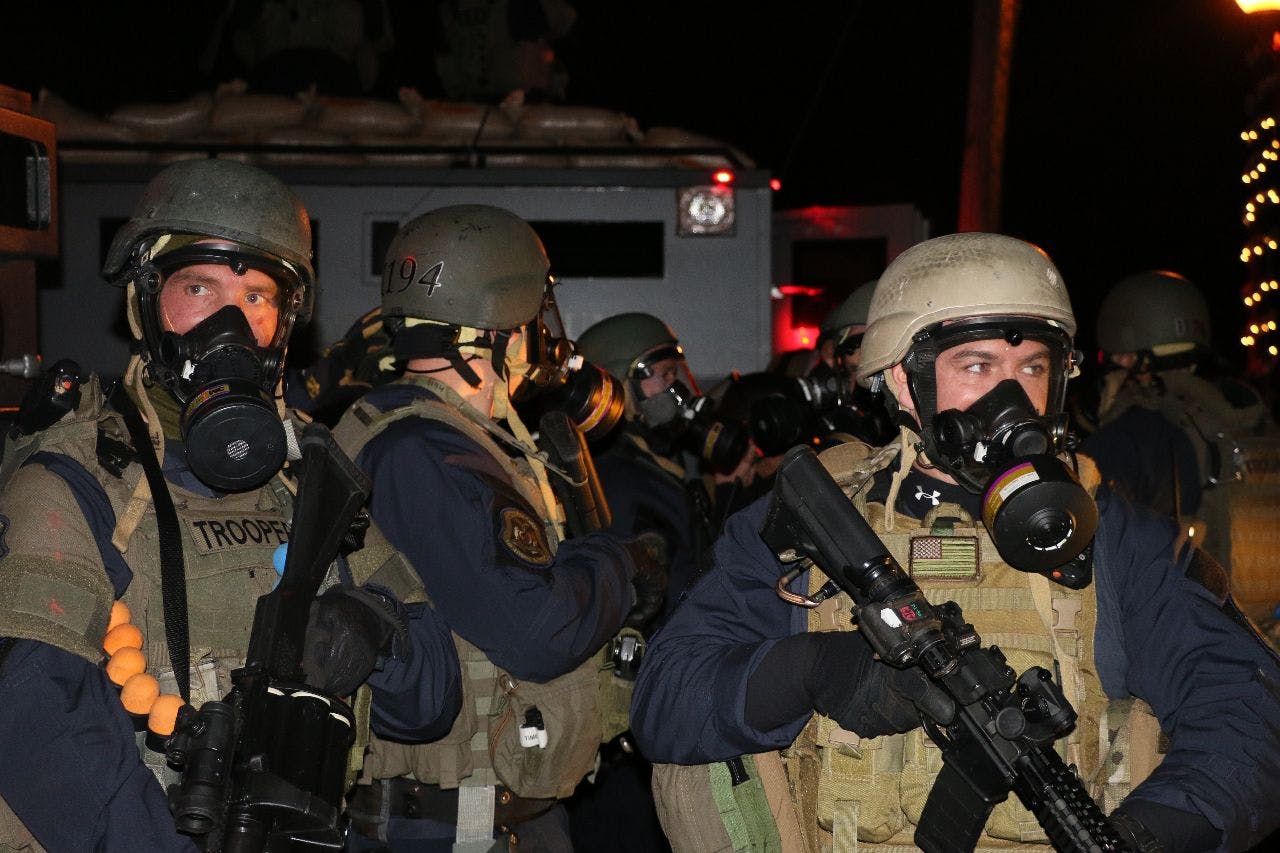 When the cold reality of the news set in, the multitude stood shocked. Their voices had either not been heard or simply didn’t matter. Pushing at the barricades proved a useless folly, faced with the dozens of heavily armed and armored riot police. Storming the Bastille of Ferguson Police headquarters wouldn’t work. So the crowd took off on a spontaneous march, flush in the street down South Florissant Road. They were met with a line of riot police, and effortlessly marched right past it, swallowing the officers whole.

Somehow, a lone St. Louis County police car was left defenseless, and became the first victim of the seething throng’s wrath. Its windows were smashed with bricks torn from the sidewalk, and it was nearly flipped over by four masked men. That was when the first shots were fired.

Police moved in swiftly, firing rubber bullets at close range at the would-be car flippers. The entire street filled with tear gas. The armored SWAT vehicles retorted with stun grenades and teargas, which filled the street. A downward wind carried the gas back toward the police phalanx, and the mass of bodies advanced. An elderly woman lied down in the street in front a roaring, screeching armored behemoth with snipers for horns and a hundred masked National Guardsmen for a tail. As she was carried away by two bulky sergeants, a dozen or more tear gas canisters sent the crowd running back in a stampede.

The actions of the police belie their own assertions that “good” protesters, who are righteously gathered to have their voices heard become collateral damage when “bad” protesters use them as “human shields,” as St. Louis Police Union spokesman Jeff Roorda put it. Unable to keep from provoking individuals on one side of the street, police responded with the lazy-handed strategy of gassing the entire street. In the most egregious case, when a crowd tried to carry a shellshocked woman to safety out of the fray, screaming “She’s having a heart attack!” — police responded with stun grenades and a cloud of tear gas. 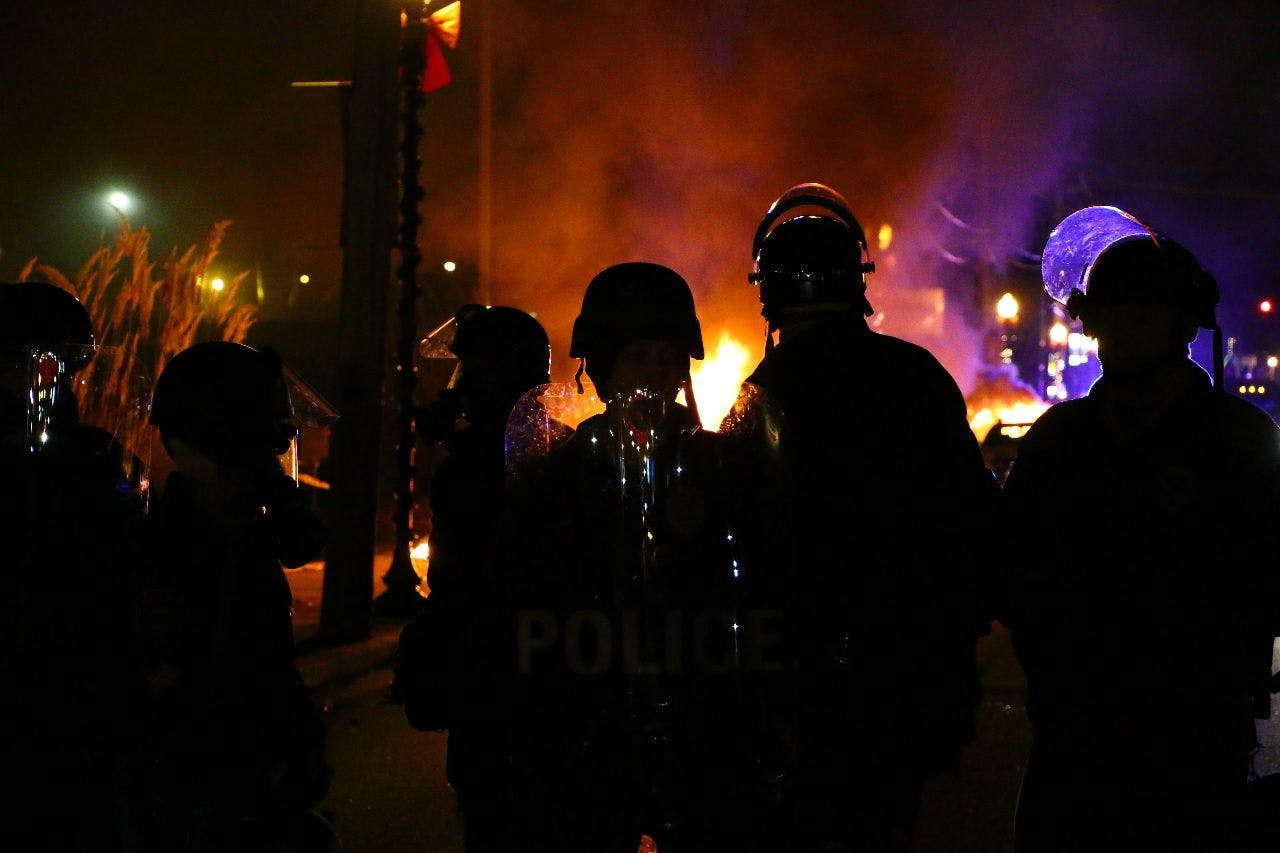 With an armored mass pushing from the south, a flood of protesters set loose like a rhizome spreading out to the north. It was then that glass started breaking, and fire kept rising. It started with a trash can fire. Then a police car went up in flames. Its owners, with all their armaments, were powerless to prevent it. Storefronts windows that weren’t boarded up on South Florissant Road were shattered by blind rage. Police were nowhere in sight as aggrieved protesters took out their anger on a town that they felt betrayed them.

And so the mission that officials had been hammering home for months was an abject failure once again. Having failed in August, Gov. Nixon and St. Louis Mayor Francis Slay vowed time after time after time that the police would use minimal force to protect property while allowing protesters to exercise their right to free speech. But even judging from their own objectives, the police response last night was a miserable disaster on dual fronts, both in showing restraint and allaying criticisms that they were too lax in preventing businesses from being ransacked. 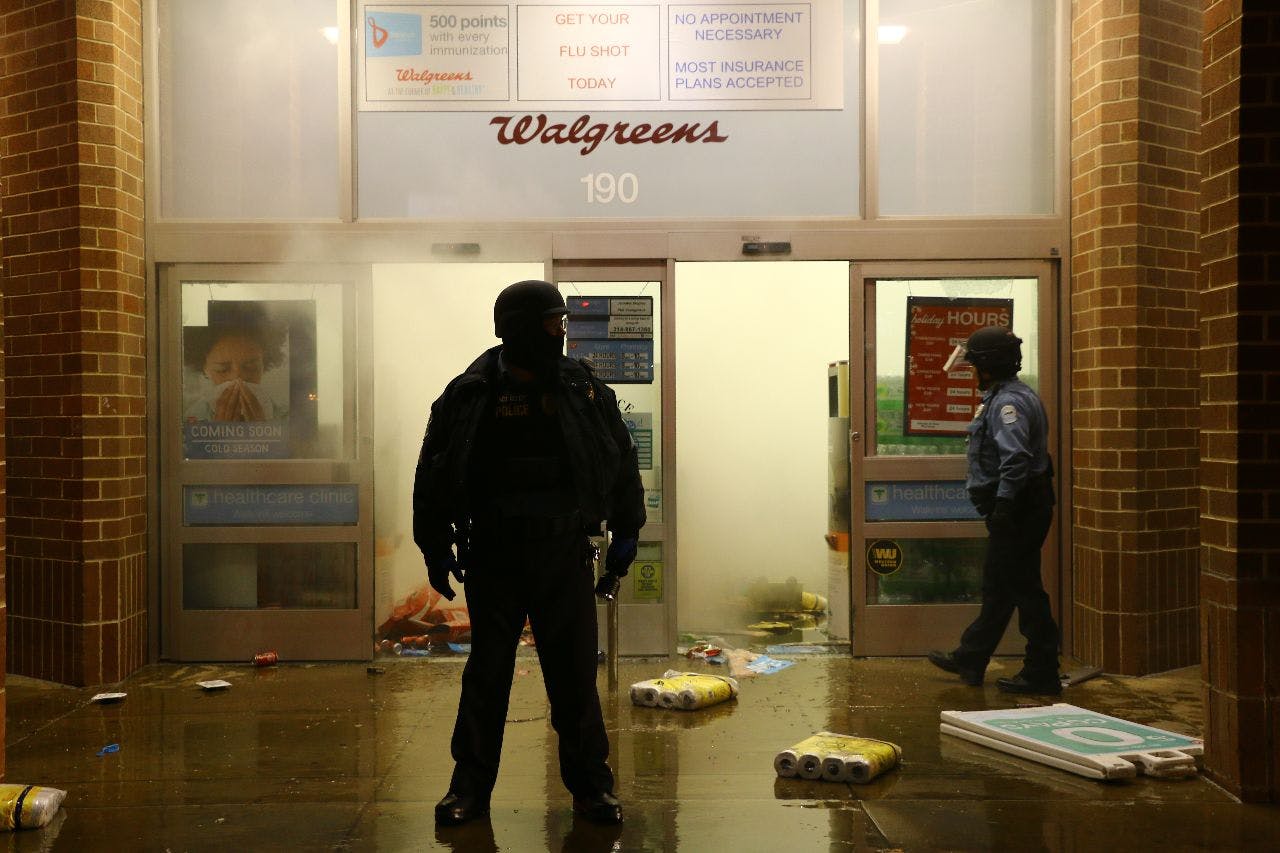 What started as an agitated, yet concentrated, convergence quickly diffused into spontaneous chaos all throughout Ferguson and surrounding townships. Weeks, months, whole generations of repressed fury came unbridled on this night. Darren Wilson was not the first white man to walk free and face no consequences for taking a black life. Behind the curtain of an easily simplified narrative that paints protesters as savage animals, there is an unheard voice behind the rage crying: “not one more.” 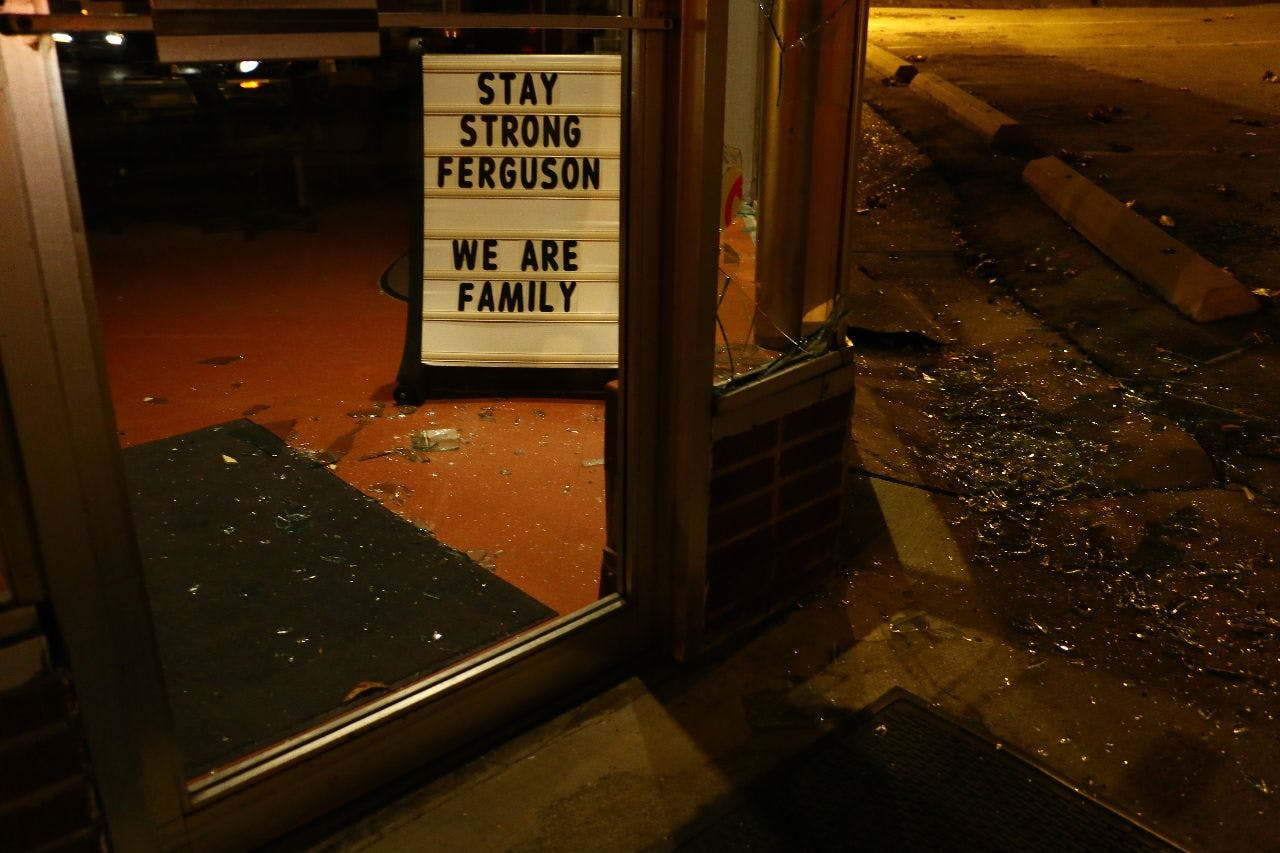 Dizzying reports poured rapidly out of protesters’ cellphones, becoming more and more difficult to follow. One after another, buildings were ransacked all over town in an unrehearsed symphony of revolt. McDonald’s was smashed. Twelve new cars ignited at the dealership. Two gas stations burned to the ground. The police stood by and watched. Garrisoned in front of the Ferguson police station, they lost track of the protesters dispersing in every direction. “Don’t go into a war unless you’ve got a plan to win,” an elderly gentleman would later mutter aloud while walking away from the impromptu battlefield, defeated but defiant.

“This is only the beginning,” Ferguson activist Alexis Templeton vowed, bellowing electricity through a megaphone to a frenzied crowd. It will take time to assess the extent of the damage, and the financial impact of last night’s riots. Despite a handful of arrests for petty crimes, which police touted like trophies of “looters” in an apparent attempt to pull attention away from the fact that they had already spent millions in public funds and police overtime protecting one man from suffering a trial by a jury of his peers, none of the broken glass felt pain like Mike Brown’s mother does: 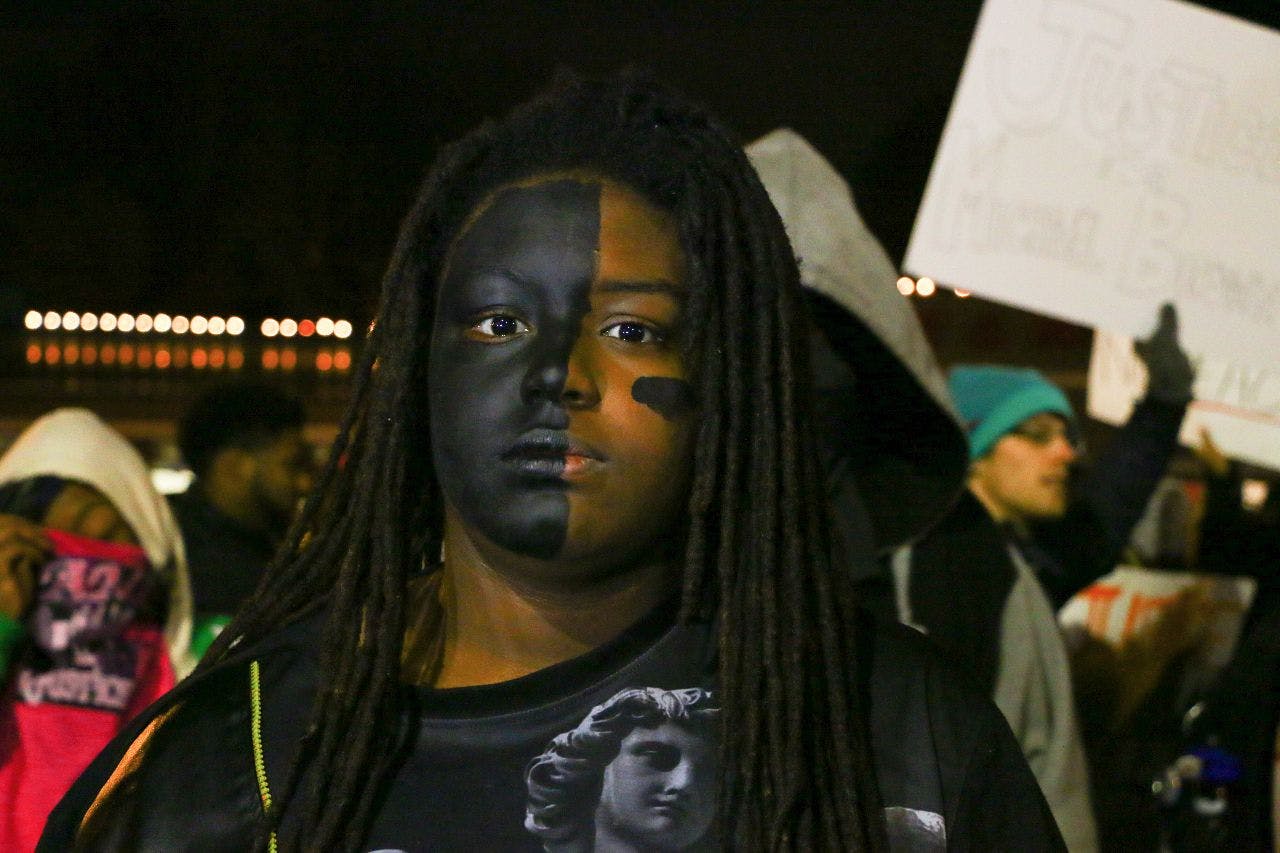 Despite everything that was burned and broken, none of it will bring back Mike Brown.