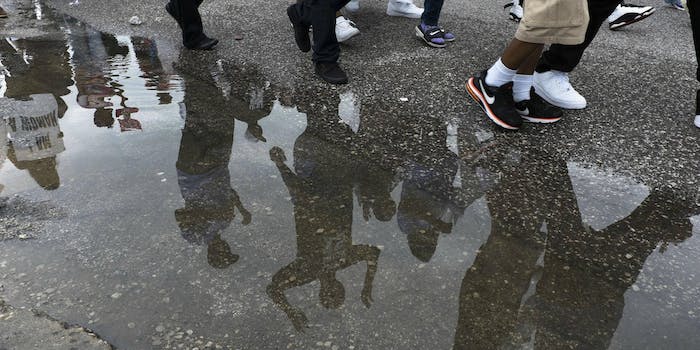 How to help Ferguson rebuild

You can do a little. Which is a lot more than nothing.

It’s easy for anyone sympathetic to the plight of Ferguson, Mo., to feel despair. Despair that an officer who shot an unarmed teenager won’t face a trial, that racial tensions are so bad that Ferguson has seen seemingly nonstop unrest—sometimes violence—in the months since, and despair that innocent people are caught up in the protests.

But you can help, if only a little, without leaving your computer. There are at least three places to donate to help Ferguson rebuild. It won’t fix the town’s, or the nation’s, deep-seated problems. But it can help a little, which is infinitely better than nothing.

Despite the unrest and public school closings in Ferguson, its public library system is heroically open for its community.

We are open 9-4. Wifi, water, rest, knowledge. We are here for you. If neighbors have kids, let them know teachers are here today, too.

WE ARE OPEN! Teachers and volunteers are here 9am-3pm to help kids who can't go to school today. Library open 9-4, presuming it stays safe.

In August, the blogger Fat Girl Reading noticed that library was low on supply and created a wishlist of books people could donate through Powell’s bookstore in San Francisco. All but one of the 120 books on that wishlist have since been filled, but the library is still open to other books and financial donations. Per the library’s website, it receives PayPal donations here.

You can also give to the library in Bitcoin here.

Give to the United Way:

The St. Louis chapter of the United Way, a coalition that together counts as the largest charity in the U.S., has set up a special fundraiser for Ferguson. The United Way doesn’t have a cohesive plan yet in place, but promises that all funds through this drive will go towards Ferguson and will apply to the charity’s usual goals of “community building, mental health needs, basic needs, and long-term strategies.”

Give to a local food bank:

While a number of local churches have food banks that only accept money through mailed checks, at least one, the Food Pantry at St. Stephen’s, accepts online donations. A $50 donation provides a day of meals for five families of four, the parish says. You can donate here.

Update 8:45am ET, Nov. 26: This article has been updated with details about donating with Bitcoin.