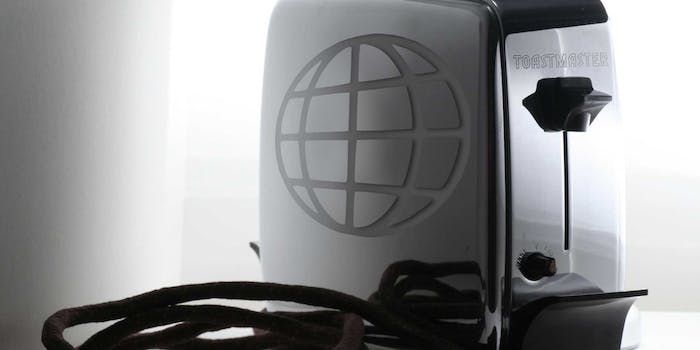 Rep. Blake Farenthold (R-TX) wants to make it hassle-free for you to sell your tweeting toaster, and despite the name of his bill, you won’t need the Force to do it.

The second-term congressman from Texas’s 27th district on Thursday announced the You Own Devices Act, or YODA. Don’t be fooled by its diminutive name—this bill has grand ambitions. It is designed to stop manufacturers from using the firmware, which is copyrighted, embedded in their products to prevent secondhand sales.

YODA, Congressman Farenthold said in a press release, “would simply state that if you want to sell, lease, or give away your device, the software that enables it to work is transferred along with it, and that any right you have to security and bug fixing of that software is transferred as well.”

Because Farenthold announced his bill on the eve of Congress’ pre-election recess, there are no other co-sponsors for it yet, said Lee Towns, Farenthold’s communications director. Speaking through his office, the congressman told the Daily Dot, “It might be too late to get something done this Congress, but we wanted to drop it to get the conversation started. We will keep refining it and gathering support going into lame duck and the next Congress.”

Farenthold’s bill is designed for a world in which nearly everything is connected to the Internet. While the secondhand transactions covered by the bill are mostly between businesses right now, that will change as previously mundane devices like toasters and refrigerators join the so-called Internet of Things. Once those items become networked, they also become susceptible to manufacturer sabotage designed to thwart secondhand sales.

With the Internet arriving on more and more household appliances, the market for consumer-to-consumer sales of these connected devices is likely to take off. Transactions that bypass the original equipment manufacturers (OEMs) in this way already take place between businesses, with tech support firms servicing big-name products at a lower price than the OEM would charge.

Currently, it is legal for OEMs to sell equipment with firmware that can prevent the equipment from functioning if it is not licensed properly. Some OEMs use this to prevent their customers from becoming vendors to other potential customers. In a hypothetical example, Cisco Systems Inc. could embed code in one of its enterprise-level wireless routers that deactivates the device if Cisco detects that it has been installed in a new business environment.

Networking equipment manufacturers often include clauses in their enterprise contracts with businesses stating that the business is merely licensing the software necessary to make the device work. By establishing that the device is contracted to the customer, OEMs retain control over how and where it can function.

“It is critical that we don’t allow this software which otherwise enhances our experience to fundamentally alter the concept of ownership,” Farenthold said in his statement.

One example of an OEM cracking down on intermediary business involving its products came in April, when a comany called Avaya sued another company called Continuant for selling technical support solutions for Avaya products. According to the Puget Sound Business Journal, “The telecom giant claimed Continuant did not have the right to service products that Avaya manufactured and sold without Avaya’s permission.”

The Continuant case recalls a landmark 1992 Supreme Court ruling in which the Court held that the Eastman Kodak Company could not prevent other firms from offering repair services on Kodak products.

“This straightforward and tightly-focused bill reinforces our First Sale rights and preserves our ability to truly own the products that we buy,” Farenthold said in his statement.