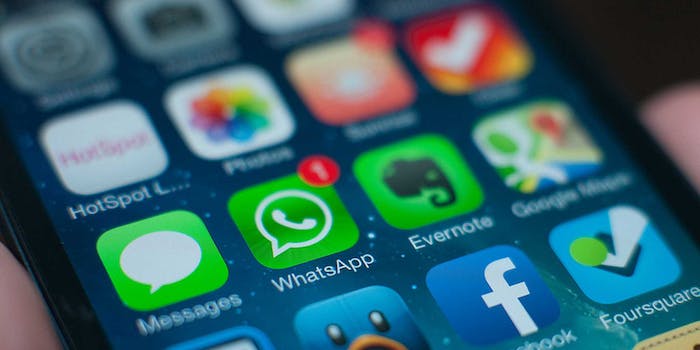 Hubris, thy name is WhatsApp.

Oh dear: Just days after being acquired by Facebook for a mind-boggling $19 billion, it appears that WhatsApp is down and users cannot access it. When you log in, things might seem normal, but when you head to your chats and try to send one, you’ll realize the “Send” option doesn’t work and your phone will get stuck attempting to connect with your messages.

The outage has lasted for more than two hours now. WhatsApp has acknowledged the issue and says it’s working on a fix.

sorry we currently experiencing server issues. we hope to be back up and recovered shortly.

The break is likely due to media coverage that’s prompted users to go out and download WhatsApp. That, and the weekend (a high-texting time) are probably what’s to blame.

So is this a signal Facebook overpaid? That WhatsApp is a weak service we’ll regret downloading? In a word, no. If anything, Facebook’s infrastructure will be able to back up WhatsApp from this type of thing happening, and a mass-deleting of the app is unlikely, despite this brief hiccup. It’s sort of a happy glitch to have—so many users and so much demand that your app momentarily goes offline? #Billionaireproblems.

WhatsApp service has been restored. We are so sorry for the downtime…