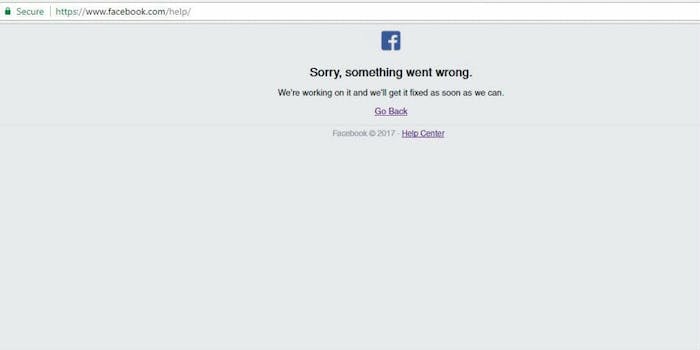 The social media giant confirmed all versions were back up and running after a few hours of panic.

Users were met with the dreaded error message, “Sorry, something went wrong. We’re working on it and we’ll get it fixed as soon as we can.”

Everyone’s immediate reaction was to go on other social media sites to voice their somewhat sarcastic fear and concern.

#FacebookDown Do I have to talk to people in real life now?! #panic pic.twitter.com/hr7FlkaAe1

Even police in Australia were at a loss with what to do next.

We don't mean to alarm you but FACEBOOK IS DOWN!!! How will we know what you ate for lunch!? pic.twitter.com/j3z6Uf4q13

At one point, #facebookdown started trending.

Trying to login to facebook, and got this error again?
What's wrong with this @facebook #facebookdown pic.twitter.com/VJbhJ0k2yR

The outage only lasted a few hours, but had a widespread impact across Asia, Australia, and the United States. More than 7,500 people reported problems to Downdetector starting at around 9:48pm EST.

Here is a heat map from Downdetector showing areas hit the hardest.

All versions of the social network were back up and running Tuesday morning.