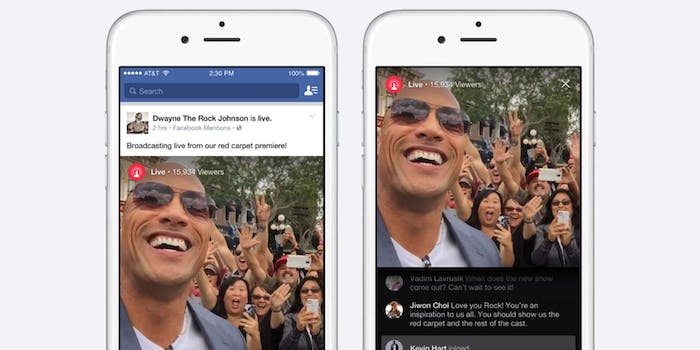 Live Video is now available for all Facebook users

Available for all users... with an iPhone.

Streaming video is either a fad that already passed or the next big thing, depending on who you ask. Facebook is putting its money on the latter, and the social network is rolling out its Live Video feature to all users—though Android devices won’t be supported at the start.

Live Video first rolled out in August, but was available only for celebrities. Facebook recruited big names like Dwayne “The Rock” Johnson, Martha Stewart, and Serena Williams to broadcast on the platform, but excluded everyone else, reducing the average user to just a viewer.

Now the feature will go the route of streaming services like Periscope and Meerkat that came before it, opening up the ability to broadcast live video for everyone to use.

Live Video will be available from within Facebook’s flagship app, lodged in a redesigned status menu that now includes an option to update with “live video.” The feature will show how many live viewers are tuning in and real-time comments as they are posted. Once a stream is concluded, it is posted on the broadcaster’s timeline like a status update unless they opt to remove it.

Facebook is granting the feature to every user on its platform, but that doesn’t mean everyone will be able to use it; Live Video will be found only in the iOS app for the time being. Android support for streaming is said to be coming next year. For now, those on Android will just be able to watch. The absence of Android devices leaves without access to a large share of the mobile market, one that is reached by both its primary competitors Meerkat and Periscope.

We reached out to Facebook for comment on Android support, but did not hear back at the time of publication.

Facebook is also introducing photo collages in its iOS app, which will allow users to arrange, caption, and post collections of photos and videos in a grid format rather than the standard scrolling stream.

The expansion of Live Video continues Facebook’s newfound affinity for the medium. The social network has racked up billions of views each and every day—though the legitimacy of those figures have been called into question.