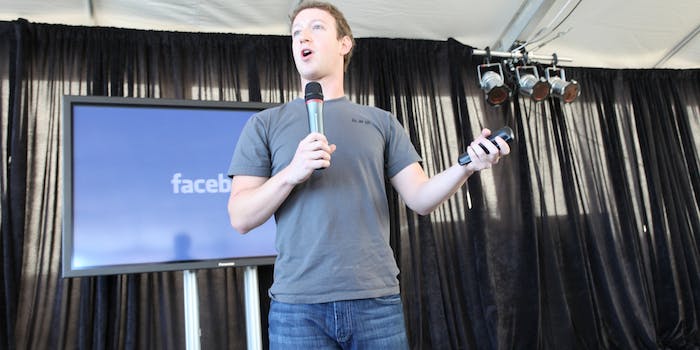 Facebook became the latest tech giant to release a diversity report on Wednesday, and the results are about as abysmal as you’d expect.

The company joins Google, LinkedIn, and Yahoo—one of precious few tech companies with a female CEO—in revealing just how underrepresented women and people of color are in Silicon Valley, and the social media powerhouse sure isn’t bucking any trends with this latest report.

According to the company’s numbers, Facebook’s staff is predominantly male (69 percent) and predominantly white (57 percent), similar to the other so-called Silicon Valley meritocracies that have released diversity figures. Asians are better represented at Facebook (34 percent) than are African-Americans or Hispanics, who represent 2 and 4 percent of the workforce, respectively.

Men hold more than three-quarters of all senior-level positions, and nearly the same number of senior-level employees are white. Most of the tech jobs at Facebook likewise go to men (85 percent). And by virtue of their great numbers, men still hold the majority of non-tech jobs (53 percent), too—though there, at least, women are at least better represented.

All four companies have released these figures partly in response to a public plea from civil rights activist Jesse Jackson Sr. to put an end to inequality within the tech industry—a field notorious for its stunning phallocentrism and lack of ethnic diversity.

“These very visible companies, the fastest-growing industry in America and in the world today, have exclusive patterns relative to boards and C-suites and employment and IPOs,” Jackson told CNBC. “We think these companies should be vertically, horizontally reflective of their consumer base.”

The Facebook report, written by the company’s global head of diversity, Maxine Williams, offered a few platitudes about how “we have more work to do” and “we’ve begun to make progress,” and pointed to a number of programs targeted to selecting a more diverse pool of talent in the future. But we’ll believe it when we see it. So far, speaking out against Silicon Valley’s inherent sexism and lack of diversity hasn’t done much good.