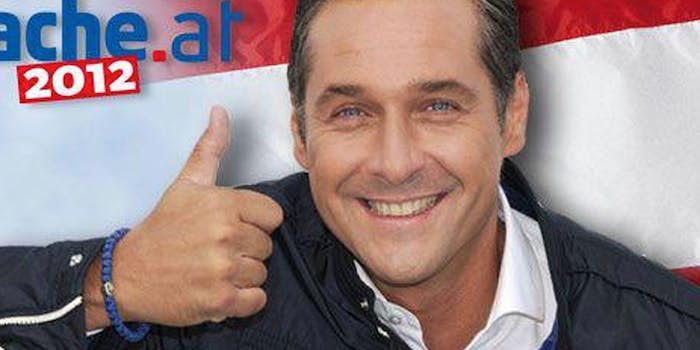 He says the cartoon he posted to Facebook isn't anti-Semitic, but critics aren't so quick to agree.

The right-leaning Strache posted a political cartoon Saturday of a plump, hooked-nose banker with Star of David cufflinks. Strache said the cartoon was criticizing European Union “banking speculators” for taking money from Austrians, but critics slammed the cartoon, saying it resembles Nazi propaganda.

He posted a similar cartoon Sunday in English. The image is the same, minus the banker’s Star of David cufflinks. Both cartoons showed a gluttonous banker eating dinner while a server (labeled the “government”) fills up the banker’s glass, and a frail man (labeled the “people”) looks on.

Stanche, who leads the Freedom Party, said the cartoons were criticising the “omnipotence of the banking system,” and not religious groups. He wrote that he is not anti-Semitic nor does he tolerate anti-Semitism.

Austrian politicians from all sides of the political spectrum have condemned Strache’s cartoons. Jewish leader Oscar Deutsch said “it’s not a coincidence” that the banker cartoon character are similar from Nazi literature in the 1930s and 1940s. The Anti-Defamation League also issued a press release saying Strache brings “shame” to Austrian politics.

Strache wrote a note in German on his Facebook page early Tuesday defending the cartoons and himself. He said people must have a “decent paranoid fantasy” to associate the star-shaped cufflinks with the Star of David. The politician added that interpreting the banker’s nose as Jewish is “completely absurd and defamatory.”

Commenters on the pictures and Strache’s note wrote mostly in support of the cartoon and the politician. Some people are writing that the political left is taking it out of proportion.

However, at least one commenter, Clemens Liehr, wrote that Strache’s actions leave little wonder as to why his party’s polling numbers are flagging. Anti-Semetic in intention or not, Strache’s controversy isn’t helping the political right.