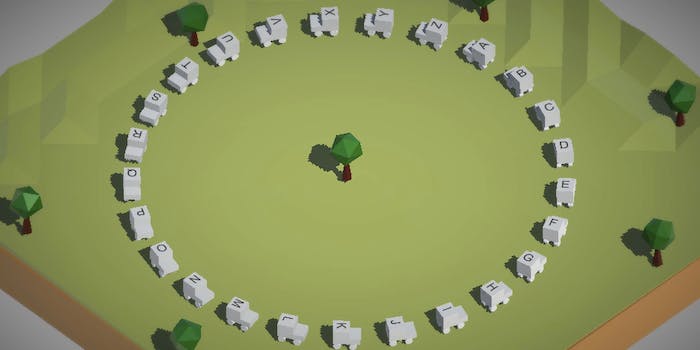 You're going to hate-love a free game called Error-Prone.

A new browser game suggests that having human-helmed and driverless cars on the road is going to make for a bumpy ride.

Bursting with the promise to end traffic jams and automotive casualties, the driverless car revolution is well underway, and the no-license-required paradigm to come will signal a weird, brackish shift on our highways. Until every car is driverless, some of us will continue steer with a human touch while others learn to rely on automatic software and a spinning LIDAR array.

A browser game created during a hackathon sponsored by the Swedish Transport Administration plunges you into the driver’s seat of the only analog car among driverless traffic. Your task is to keep up and out of the way. The name of the game—Error-Prone—gives a strong clue as to how well you’ll do.

The game presents you with 26 self-driving cars, moving in a loop in perfect harmony with each other. To take control of one, press the letter of the corresponding car on your keyboard. Press it again to accelerate and get a taste of how the autonomous cars respond to your movements. Your aim is to continue making loops in time with the other cars, while avoiding the inevitable accidents to come. A timer counts down while a distance meter calculates your flesh-and-blood performance against how well a self-driving car would do in identical circumstances.

The takeaway from the game is clear: Humans make more mistakes than than the combined efforts of hardware and software.

While the rise of the driverless car remains inevitable, it’s really fun to crash into them on purpose:

You can play Error-Prone game right over here.