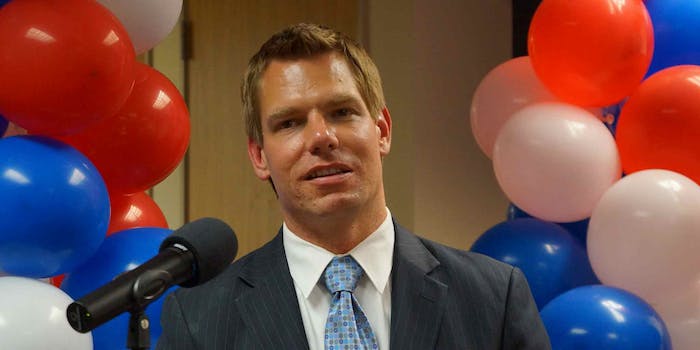 Congressman vines his own vote against anti-abortion bill

Rep. Eric Swalwell wanted to make a big impression when he voted against a bill that would make it more difficult for women to have abortions.

Rep. Eric Swalwell (D-Calif.) wanted to make a big impression when he voted against a controversial bill to make it more difficult for women to have abortions.

He vined his Nay vote. He’s believed to be the first member of Congress to do so.

Swalwell was protesting a bill, called the Pain-Capable Unborn Child Protection Act. It would ban abortions after a fetus is 20 weeks old, and is based on the idea that fetuses could feel pain earlier than previously thought.

On Twitter, Swalwell posted that the bill was part of a “war on women.” Of the Vine, he said, “When House @GOP try to roll back health protections for women, this is how I vote.”

There’s little chance of the bill actually becoming law. Even if it were picked up and passed in the Democrat-controlled Senate, President Obama has already promised to veto. He did not, however, stress his point with a six-second video with stuttering sound.