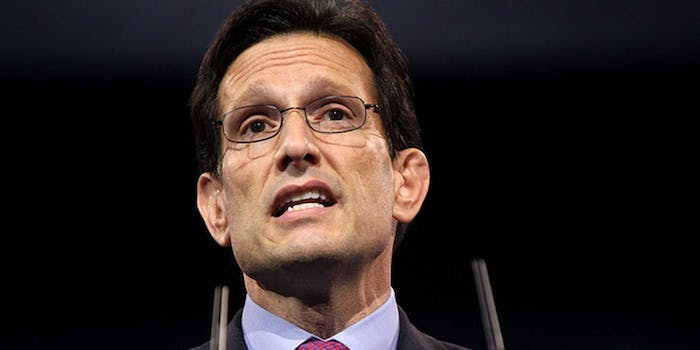 You can thank a new Facebook app launched by House Majority Leader Eric Cantor (R-Va.) for this.

On Tuesday, Cantor’s office launched Cosponsor.gov, a site and Facebook app that lets citizens cosponsor bills and follow their progress in the House of Representatives.

Citizens can scroll through the long list of bills—there are currently 2,544 and they include initiatives introduced by Republicans and Democrats—and click the “cosponsor” button. This act of digital civic duty will then be displayed on their Facebook page.

Each bill also has its own individual page that provides a brief overview of what it will do should it pass, a link to the full PDF document, the congressperson who introduced it, and where exactly it is in the legislative process.

Cosponsor.gov is similar to the White House’s We the People petition site: It allows politically engaged individuals to interact with their elected officials.

“Transparency, open government and engagement should be a key goal of all elected leaders in Washington, and Cosponsor.gov is one step in that direction,” Cantor noted in a statement.

Despite efforts for bipartisanship, the top seven most-supported bills have been introduced by Republicans. The Fair Tax Act of 2013—a bill that calls for the abolition of the Internal Revenue Service and and introduced by Congressman Rob Woodall of Georgia’s 7th district—is the most popular, having received the support of 564 citizen cosponsors.