At $150, it's not cheap, but the Ember Mug will delight coffee addicts.

The Ember Mug is a first-world product. It’s a $150 connected, heated travel mug you can buy at Starbucks alongside your $6 holiday spice latte. It is entirely exorbitant, totally unnecessary, and I absolutely love it.

The Ember Temperature Control Mug looks like a typical travel mug. It’ll fit in a car beverage holder, or even a water bottle cage on a bicycle (albeit a tad loosely, for the latter). It’s covered in a grippy, soft-touch material, similar to what you might find on some Android smartphones these days. Unlike a normal mug, though, it doesn’t just insulate what’s inside—it keeps your precious caffeine at the exact temperature of your choosing.

This may not sound landmark (“OK, warm coffee, big deal”). In fact, after a day or two of use, you may not even truly appreciate this ability. But then will come a day when you forget to use it. You’ll take a sip of your morning tea, and it’s lacking personality. It’s lukewarm. Caffeinated trash water. “I can’t believe I forgot to use my Ember mug,” you’ll think to yourself. And you’ll never forget again.

To get started, you charge up the mug on its matching wireless charging dock, and then connect it to your phone via the Ember app. Give it a name—I chose “Muggle,” because what else would I name my mug?—fill it with liquid, and then select the temperature you’d like it to be heated to. The app has some presets available at the bottom of the screen (130 degrees Fahrenheit for coffee, 132 for tea) but you can customize that yourself. To check its heating status, you can tap the mug’s logo or check the app. Once done, the app will notify you that your perfect temperature has been reached. 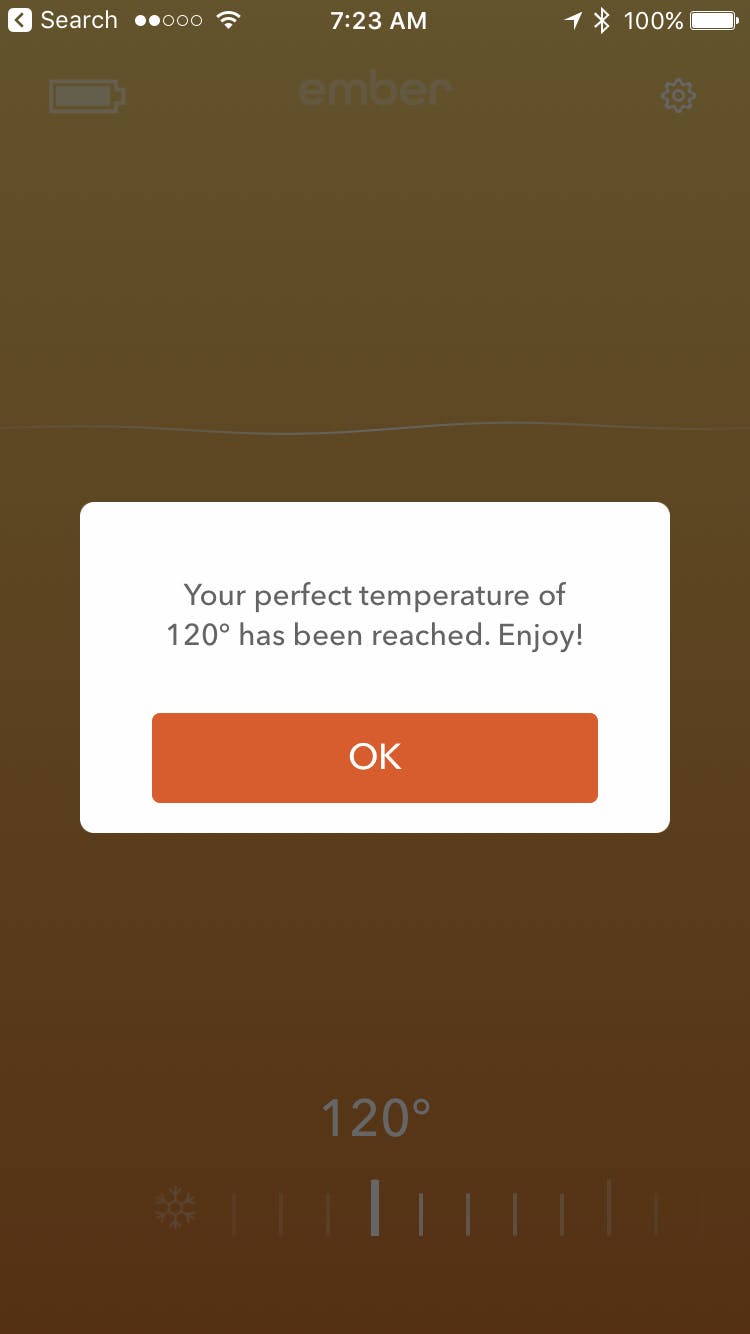 You can set the Ember mug to the temperature of your choosing.

The mug fully charges in about an hour, and once charged, it’ll give you up to two hours of glorious liquid heating. This figure varies upon use, though: I found I often got closer to 1-1.5 hours out of it. During my second or third cup of tea, I usually have to heat and charge at the same time—something that could be problematic if you’re on the go, rather than sitting three feet from the charging dock.

The lid is unique (at least in my experience with travel mugs). Instead of having a spout that you slide open, or one that opens with a small button tap, the whole top portion of the lid clicks downward when pressed. The benefit of this design is that you can sip from any angle without fear of spillage, which is wonderful. This design also better insulates what’s inside the cup, too.

However, because the Ember mug is roughly the same size as a normal travel mug but also includes extra heating and insulating tech, it doesn’t seem to hold quite as much as other mugs—just under 12 fluid ounces. There’s a fill line marked along its stainless steel interior, and if you fill your mug up above this line, it will spill. (Hopefully you will learn this lesson before your mug’s contents have reached their optimal, quasi-boiling temperature.) It does do a great job of keeping the heat inside, though; the mug itself never, ever got hot to the touch, even with near-boiling liquid inside.

Despite its couple of drawbacks, the Ember mug has become a regular part of my morning routine. It’s one of the few products I’ve reviewed that I actually miss when I stop using it. And judging by the positive reviews and sold-out status on Starbucks’ website, I’d assume others feel the same way. Unfortunately, it is a $150 purchase, which feels absolutely insane for a coffee mug. Still, if you are a coffee fiend, and a good, hot cup of joe makes the difference between a good and a bad day, it could be the best buy you make all year.