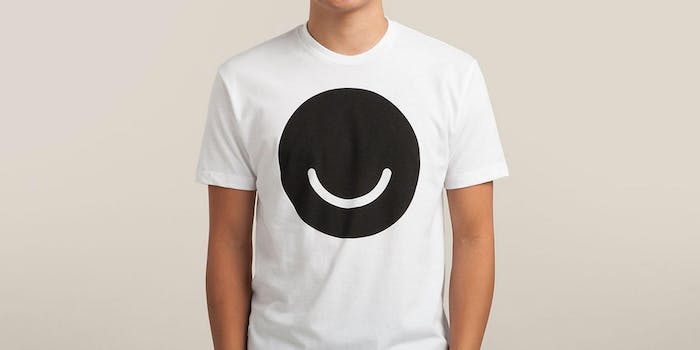 Ello is selling T-shirts to help keep the lights on

The limited edition tees will set you back $35, so like, know that.

Remember the other day when all of your startup bro T-shirts were dirty? Wasn’t that the worst day? You know, if you’d bought Ello’s new T-shirt, you wouldn’t have been in the same predicament.

Ello’s T-shirt collection will rotate twice a month and be curated by user @nopattern, who also created the first limited edition design. While the limited edition options might not stick around forever, the regular black or white Ello logo shirt will stay on sale for $25; presumably as long as Ello keeps kicking, which is anyone’s guess. The limited edition tees will set you back $35, so like, know that.

Ello developer Justin Gitlin (@cacheflow) posted the shirt to his account with a bit of commentary on the social network’s intentions, which are noble enough, at least when rendered in a kind of nostalgic monospaced typeface.

“Instead of being creepy and selling your personal data like other networks do, we’re releasing limited edition wearable art as a way to help us sustain our efforts. The “free” nature of other social platforms requires that we give up our privacy and personal information to corporations in return for a service.

Gitlin calls the shirt store “one way to show your support” for ad-free Ello, which plans to provide premium paid features to stay off the beaten revenue path. Selling T-shirts won’t get Ello too far as a well-funded Facebook alternative, but you have to admit it’s sort of endearing and quaint, like a bake sale or a lemonade stand.

Is an Ello shirt the anti-startup bro shirt? Is Ello just bro-shirt-2.0? And, like, what is Ello, anyway?

All we know is that Ello is an actual, literal flat circle—and maybe that’s all we can know for now.