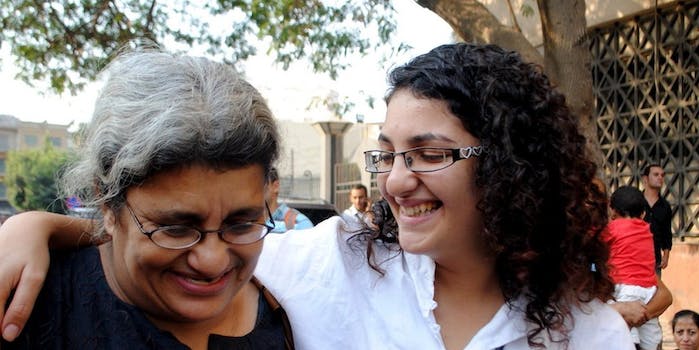 What happens in Egypt doesn't stay in Egypt.

In solidarity with Egyptian political prisoners, activists across the world are joining a hunger strike.

The hunger strike, publicized by the #EgyHungerStrike hashtag, has been spreading over the past two weeks, originating from a group of imprisoned Egyptian activists and journalists, who had already been striking for months. On Sept. 13, several Egyptian political groups called for a nationwide 24-hour hunger strike in solidarity, and since then more people have been joining every day.

The hunger strike protests the continuing imprisonment of activists and journalists, as well as objecting to a restrictive protest law that was introduced in November 2013. In many cases, the imprisoned hunger strikers were arrested as a direct result of this law.

Ahmed Ayman, detained for 440 days without trial, started a hunger strike on the 7th of September. #EgyHungerStrike pic.twitter.com/AfjeSDXUA2

Twenty-year-old student Sanaa Seif and her brother Alaa are two of the figureheads of the hunger strike, as their mother and sister (human rights activist Mona Seif) have both been striking since Sept. 4. Sanaa has been released, but her brother is still imprisoned, with at least 63 other detainees now on hunger strike.

Over the past week, the strike has gained wider attention due to its spread on social media and participation from prominent Egyptians, such as former presidential candidate Khaled Ali. On Friday, Egyptian TV presenter Reem Maged announced that she would be performing a 48-hour hunger strike on Sept. 20 and 21.

I,AbirElmasry announce going on hunger strike in solidarity with the Egyptian detainees to release all political prisoners #EgyHungerStrike

The spread of the hunger strike can be followed on social media and now extends to real-world protests being organized outside of Egypt, such as a New York gathering on Tuesday. It seems that #EgyHungerStrike is still gathering momentum.

Photo via Lilian Wagdy/Wikimedia (CC BY 2.0)