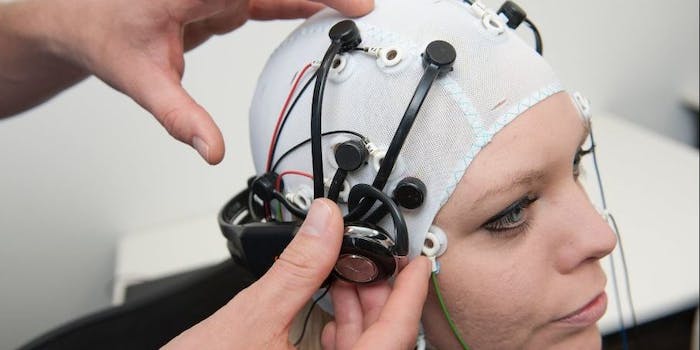 There is still a lot of work to do.

Headsets that receive signals from our brains may one day let us harness the power of the force.

At least, that’s what Star Wars fanatic and Emotiv CEO Tan Le is hoping for. At a SXSW session titled “Brain Wearables,” Le spoke of unlocking the human brain using wireless electroencephalogram, which we’ll just call EEG from now on. An EEG is a test that tracks brainwave patterns to find problems related to the human brain. It has been used in the medical field to detect brain activity since 1924, but it is now being tested to achieve something that looks a lot like telekinesis.

At SXSW, Le strapped her own sci-fi certified creation onto an audience member’s head and told him to move a Bluetooth connected ball with his mind. He was able to make the object roll around a desk within a matter of minutes.

The device the man is wearing in the video has a bunch of electrodes that measure electrical signals produced by the brain’s neurons. A machine learning algorithm is used to search for and map repeated patterns. Once it’s done that, the EEG knows how to correctly react to the patterns it is familiarized with.

The data can be used in two related ways.

The technology isn’t limited to a single use, according to Le, “There is no theoretical limit for the range of complex ideas our thoughts can produce, so the applications are only limited by the imagination of the researchers who work on it.”

ESPN even used Emotiv’s headset for a Sport Science segment.

Other applications include moving physical objects, flying a drone, casting a magic spell in video games, or moving around a toy BB-8.

But it’s people with physical disabilities or disorders where Emotiv really thinks its headset can make a difference. With an EEG, neurologists can find patterns and spot abnormalities that could lead to seizures or other neurological disorders.  Tan is going beyond brain waves to classify thoughts and expressions using whole brain sensing. This can be used for early detection of neurological disorders such as autism or epilepsy.

“Just as you can use the brain to control and move a toy you can also empower people with physical disabilities,” Le said. “Those who have lost limbs can open close doors or turn on faucets by communicating with their thoughts.”

In 2000, 18-year-old Cora Lovio was in a devastating car accident that left her in a “semi-vegetative” state. Tan Le created a Kickstarter to help fund an early version EEG for Cora. The campaign raised more than $1.6 million.

Here is a video of Cora controlling a video game with her mind for the first time. You’ll want the tissue box at around 3 minutes.

Despite these promising results, we are still a long way away from anything close to mind control. EEGs have some serious limitations that have slowed progress considerably. For one, they work best when placed directly on the scalp, so having hair makes things tricky. They can also be confused by outside signals. In the demonstration done on stage, the EEG took some time to get calibrated on a head full of hair. Le even remarked that the Bluetooth connection between the ball and the headset was being interfered by other devices in the conference hall.

There are also concerns that the headsets are actually picking up on current produced in our muscles instead of actual brain activity.

But a quick look back at the video of Cora may help you forget about the challenges and focus on the possibilities.