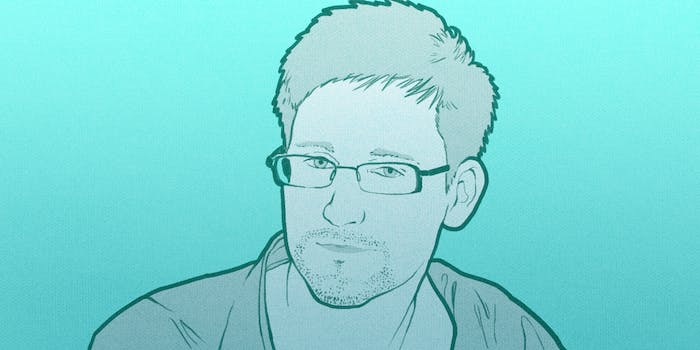 Edward Snowden: We must protect whistleblowers to protect our democracy

"People who really care about the measure of liberty … are starting to get a little bit stronger."

“Whistleblowers are elected by circumstance,” former NSA contractor Edward Snowden said on Thursday night. “More critical than who you are is what you see.”

Hours after activist David Miranda revealed his proposal for the Snowden Treaty, Snowden himself addressed the Electronic Frontier Foundation’s 2015 Pioneer Awards ceremony, where he was interviewed by journalist Kashmir Hill about his 2013 disclosures and the way they’ve changed the world.

Snowden’s comments about the “election” of whistleblowers come in response to critics of his leaks who describe his actions as undemocratic. On the contrary, Snowden said, he believed that democracies must do more to protect whistleblowers as safeguards against the abuse of power.

We must “put forth strong and reliable whistleblowing protections, so that you don’t have to hope it’s this extraordinary act of self-immolation that only comes every few years,” Snowden told Hill.

Snowden explained that he had “been working every day on the cause of privacy and digital rights, the broader goal of a free, open Internet.”

Reflecting on the more than two years that have passed since he became a household name, Snowden offered optimism as well.

“People who really care about the measure of liberty … are starting to get a little bit stronger,” he argued. “What we do have on our side is truth. We work with people who understand how this impacts their lives.”

Snowden even offered advice to other potential whistleblowers.

“Think about what you are witnessing and what you are complicit in every day,” he said, adding that they should “think it through.”

The winners of the 2015 EFF Pioneer Awards were Caspar Bowden, Citizen Lab, Anriette Esterhuysen and the Association for Progressive Communications, and Kathy Sierra.

Bowden, who died this summer at age 53, was a British privacy activist who came to prominence in the 1990s and remained a respected pro-encryption force for decades.

“Privacy was his cause … his mission,” Bowden’s wife Sandi, who accepted the award, said. “I encourage everyone here to continue the fight that he started.”

The Citizen Lab is a University of Toronto research institution famous for its groundbreaking work on censorship, surveillance, and security.

The Association for Progressive Communications, led by executive director Anriette Esterhuysen, is a prominent activist organization dedicated to expanding Internet access around the world directly in line with missions to improve the lives of people in the world’s poorer nations.