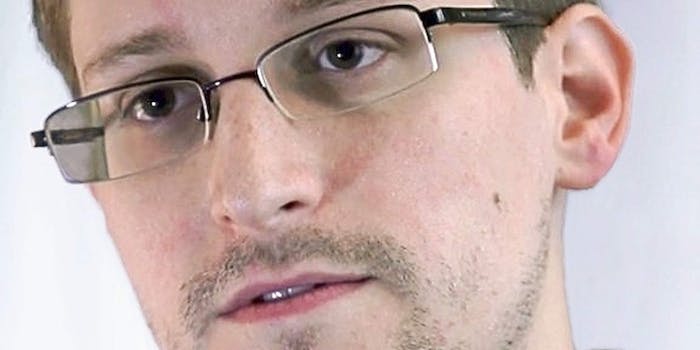 Snowden could get asylum in Switzerland for testifying against the NSA

Switzerland may not stay neutral on Snowden.

Edward Snowden could soon have a new home—theoretically, anyway.

Reports by a pair of Swiss newspapers published on Sunday indicate that if the National Security Agency (NSA) whistleblower were to come to Switzerland to testify about U.S. government spying, he would likely be shielded from extradition back to his home country.

The papers, Le Matin Dimanche and Sonntags Zeitung, cited a document prepared late last year by the country’s Attorney General, which argues that Switzerland would decline to turn over someone to a foreign government if that person’s “actions constitute a political offense, or if the request has been politically motivated,” or if the charges against the individual are of a ?predominantly political character.”

The report does note that “higher-level government commitments” could ultimately result in Snowden’s arrest and transfer to U.S. custody.

Shortly after the first newspaper stories about the leaks were published, the U.S. Department of Justice filed three felony charges—theft of government property, disclosing intelligence information, and conveying classified information to an unauthorized party—against Snowden, who is currently living in Russia with permission from the Kremlin. If convicted, he faces up to 30 years in federal prison.

Snowden was working as a private contractor at the NSA when he leaked a trove a documents about the agency’s massive electronic surveillance programs to journalists Glenn Greenwald and Laura Poitras last year. Before leaking the information, he traveled to Hong Kong and then, after he instantly became one of the most famous people in the world, fled to Russia. He was recently granted a three-year residency permit, which allows him to stay in Russia until at least 2017.

Traveling outside of Russia, however, is considerably more difficult. Snowden has been nominated for the Nobel Peace Prize and, if he wins the award and decided to accept it in person, there is no guarantee he won’t be arrested as soon as his plane touches down in Oslo, Norway, home of the Nobel Peace Center. While Snowden has spoken at numerous conferences and events across the globe, he has been forced to do so through video conferencing software.

The Swiss report was prepared in the context of Snowden possibly traveling to Switzerland to testify about the U.S.’s surveillance practices in the country.

Over the past year, NSA revelations have sparked considerable uproar in Switzerland. This appears to be primarily due to Greenwald’s claims that, according to documents provided by Snowden, the NSA has been snooping the country’s banking sector and using secret antennas hidden inside of a U.S.-operated building in Geneva to intercept communications from Swiss diplomats.

“One cannot conduct surveillance and spy on one’s friends. … That is how you disrupt confidence between states,” Swiss President Ueli Maurer said in an interview last year. “Even if you are big and powerful, you cannot sit on those who are smaller than you and bug their phones. … In the end, this will not strengthen the United States.”

Switzerland is also famously protective of the privacy of its citizens and private institutions. As a result, many online data storage companies, such as secure email service ProtonMail, have advertised that their servers are housed in the country to intentionally make it as difficult as possible for U.S. authorities to get their hands on user data.

If Snowden were to end up in Switzerland, it would not be his first time living in the country. Prior to his time as an NSA contractor, he was employed by the Central Intelligence Agency (CIA) and stationed in Geneva under diplomatic cover doing computer network security for the intelligence agency.

However, he says his experience there was not particularly positive. In a chat log recorded well before he became a public figure, Snowden called Geneva, ?nightmarishly expensive and horrifically classist.”

In fact, it was something he witnessed during his time in Geneva that first made Snowden think about blowing the whistle on how the U.S. government gathers intelligence around the world. The Guardian reports:

He described as formative an incident in which he claimed CIA operatives were attempting to recruit a Swiss banker to obtain secret banking information. Snowden said they achieved this by purposely getting the banker drunk and encouraging him to drive home in his car. When the banker was arrested for drunk driving, the undercover agent seeking to befriend him offered to help, and a bond was formed that led to successful recruitment.

“Much of what I saw in Geneva really disillusioned me about how my government functions and what its impact is in the world,” he says. “I realized that I was part of something that was doing far more harm than good.”