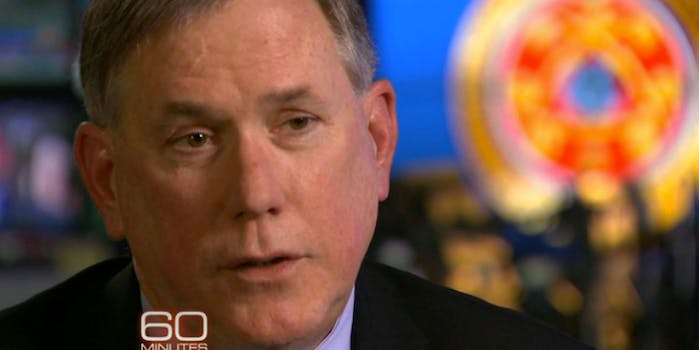 All he might need to do is turn over every top-secret file that has yet to be published.

That’s if Snowden, a former NSA contractor who leaked top secret information about the U.S. surveillance practices, agrees to return the mountain of data he took from the agency.

In a CBS 60 Minutes interview scheduled to air Sunday night, Richard Ledgett, the NSA official in charge of determining the damage allegedly caused by the Snowden leaks, talked about the controversial amnesty question.

“My personal view is, yes, it’s worth having a conversation about,” he said in the interview. “I would need assurances that the remainder of the data could be secured, and my bar for those assurances would be very high.”

While the NSA can’t grant Snowden amnesty—that’s up to the U.S. Department of Justice—the interview signifies a change in tone for at least one important member of the NSA, though Ledgett acknowledged the view isn’t unanimous.

Gen. Keith Alexander, the agency’s current director, told CBS he’s against amnesty because it could incentivize future violations. It’s worth noting, however, that Alexander and his civilian deputy John C. Inglis are retiring soon, and Ledgett may be in line to replace him.

While the aggregate effect of the leaks on national security has yet to be determined, damage has certainly been done to the reputation of the NSA, which has been under fire both in the U.S. and abroad since the disclosure of its spying tactics. According to The Guardian, whose journalists were primary recipients of the leaks, only 1 percent of documents provided by Snowden have been published.

The Department of Justice filed charges against Snowden in June, including espionage and theft of government property. U.S. State Department spokeswoman Marie Harf told the Guardian on Sunday that Ledgett was expressing a personal view on amnesty for Snowden and the U.S. had not changed its position.

“Mr. Snowden is facing very serious charges and should return to the United States to face them,” she said.

While it’s clear the NSA desperately wants to secure the portions of the Snowden documents that have not been publicly disclosed, guaranteeing their safe return might be challenging even if the NSA and Snowden were to strike an amnesty deal.

Snowden told the New York Times he was no longer in possession of the documents, which he gave to several journalists for safe keeping before he fled to Russia, where he’s been granted one year of asylum.

It’s also not clear if Snowden would be willing to make such a deal. He’s maintain that he released the information in good faith as a whistleblower because the world had a right to know.

“Citizens have to fight suppression of information on matters of vital public importance.” he wrote in a manifesto published in early November by a German newspaper. “To tell the truth is not a crime.”

H/T The Guardian | Screengrab via 60 Minutes/CBS