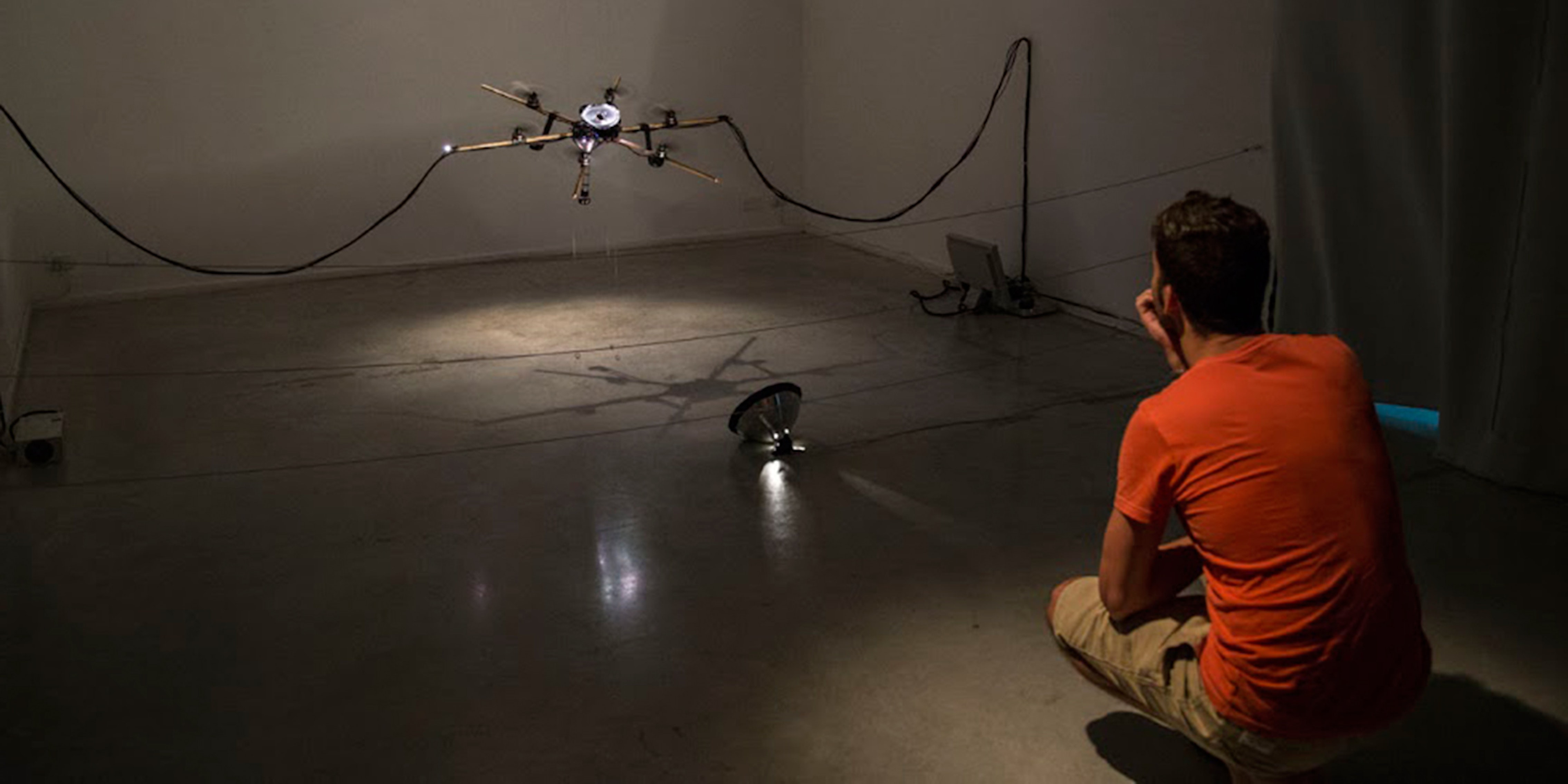 Drones are descending on the art world

A group of artists explains how they're using drones to make a new kind of art.

There’s public debate on whether there should be drones in the military, drones in the national airspace, or drones over our streets and homes. But what about drones in the art gallery? Artists interact with material in a very open-minded and thorough way. In 10 years, perhaps our drones will look more like an artist’s image of them than Amazon’s vision.

To see how they might help in predict the technology’s future, we reached out to a group of artists who work with the technology.

Why work with drones?

Isabella Streffen: “My doctoral research looked at how vision is ‘militarized’ and considered the confluences between research in military weaponry (in the broadest sense) and technologies used for looking. […] I’m currently working on the idea of a Third Aerial Age—looking at how pervasive vision has precipitated a new relationship with the aerial—and thinking about why our responses to drones are so contrasting to our responses to other (equally lethal) aerial technologies.”

Nadav Assor: “[The drone is] nothing new. It’s a model airplane with some sensors. But it is [new], because it’s all in one package, and it’s got a body. So it’s an embodied manifestation of all these things; you can project on it that it has its own identity or character. So that was really powerful for me, because it was very symbolic.” 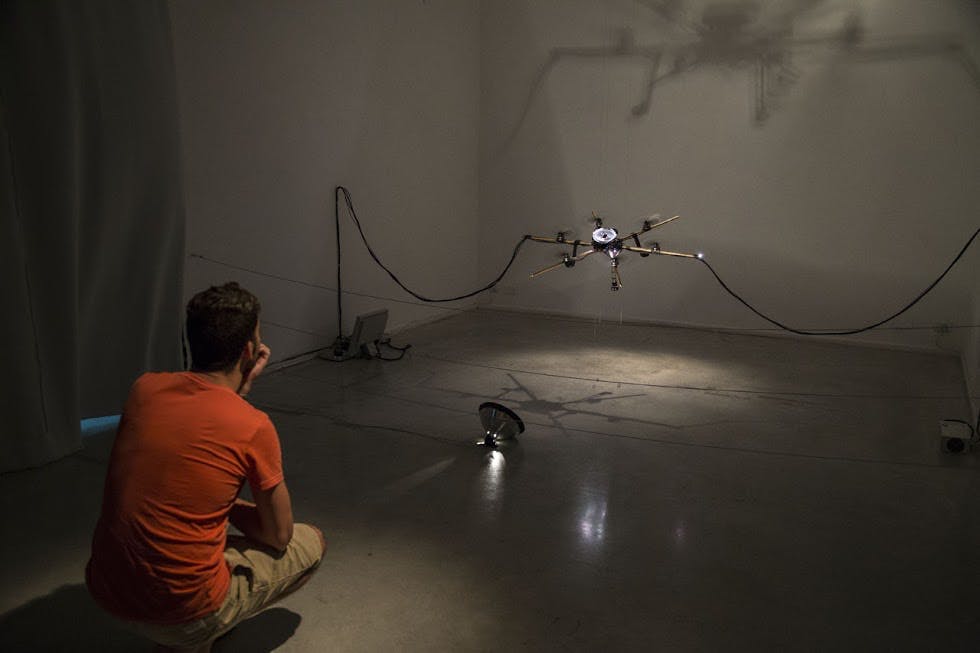 Suzanne Treister: “[Drones] have a kind of sci-fi futuristic appeal. They are unmanned, which is both frightening and tantalising due to the potential for out-of-control situations or hacking. And they cause death and destruction, the prime subject of the media.”

Sterling Crispin: “I had been working with military technology and reappropriating it for aesthetic and beautiful purposes as a political action unto itself. […] The same technology that could build a crossbow could build a musical instrument. That spirit was my approach.”

Lee Montgomery: “I prefer to think of [drones] as part of a lineage, that I think began with the kite. Kites and hot air balloons had military purposes, originally. Kites in Japan were used to signal that an army was approaching, or flammable liquids could be hung from a kite, and it could be floated above a city so that when the kite dropped it was like dropping a missile. There’s even evidence of really large kites being used as a gallows to hang people from. None of that is something that we’re now aware of on a popular level when you go to a toy store and buy a Darth Vader kite. And I would like to think that as [drone] technology gets popularized a bit, a similar process could happen.” 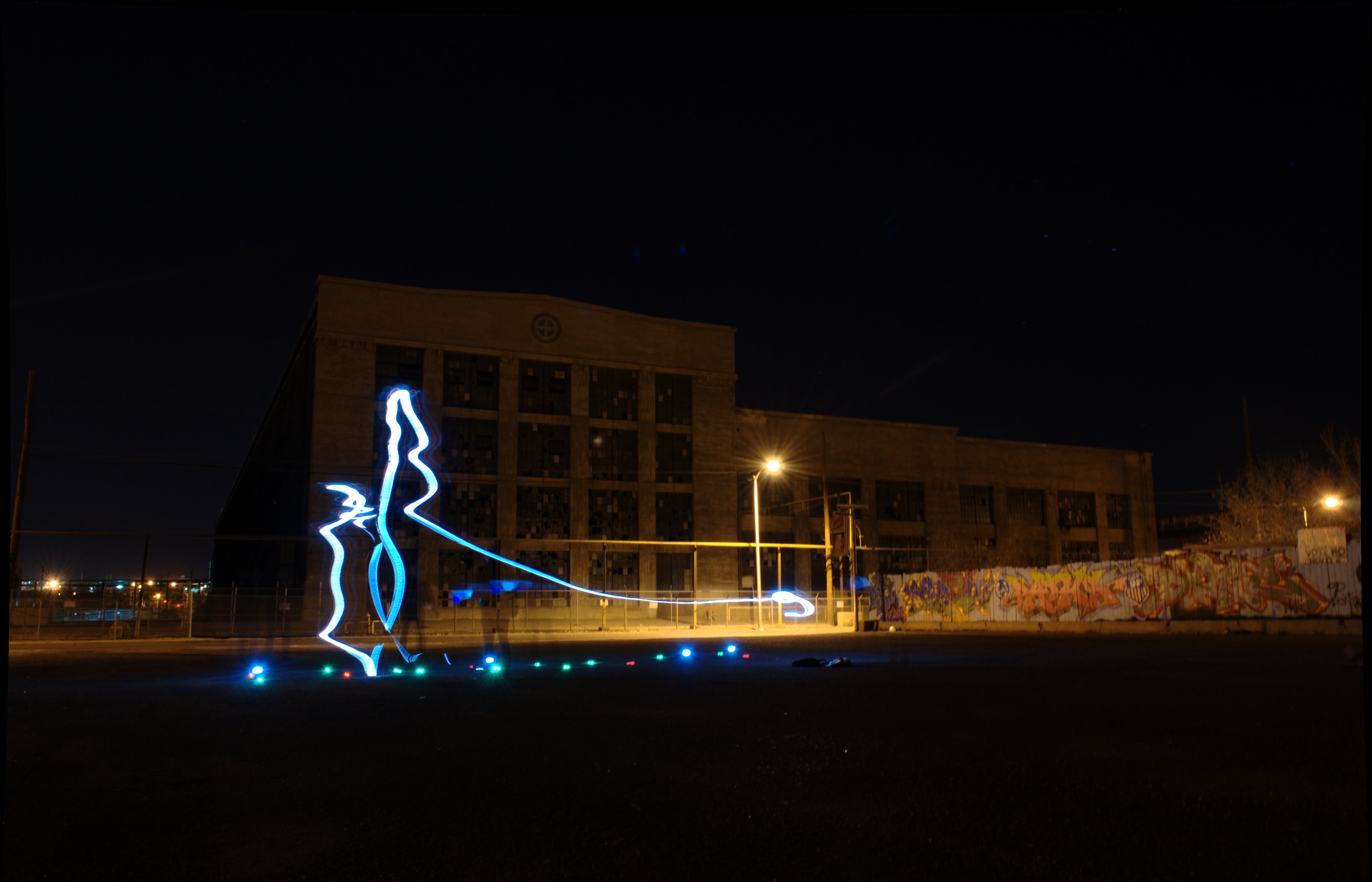 Greg Riestenberg: “I was really motivated by an engineer in Afghanistan who built his own drone and flew it, just with a camera. It was just for him, a symbolic protest about what’s happening in his country.”

Jon Arden [of Superflux]: “We’re interested in exploring a potentially imminent future of what it means to live with this technology, and in doing that, we’re interested in actually using some of the technologies that will enable that.”

Anab Jain [of Superflux]: “We work with a range of technologies. We had just finished a project around synthetic biology and genomics, which we had been thinking about for a long time. It was very abstract, something that we couldn’t really get our hands dirty with. A lot of us at the studio felt we wanted to explore other sides—”

What did you discover in working with drones that might shed light on their future?

Streffon: “I really wanted [the drones] to allude to their own history, and for them to channel a very seductive aesthetic that speaks to the technological sublime. Techno-lust is a critical concern for me.”

Arden: “We still don’t quite know what their place in the world will be. But the technology is at a stage where you can buy some parts and put something together and start experimenting and start playing. […] That sort of iterative process and understanding the dynamics of the machine, the flying, the algorithms that control it. There’s something nice about having that immediate relationship.”

Jane: “I think our interest in this project is the idea of the ‘smart.’ Talking about self-driving cars, the Internet of Things, and all of these things which will report on everything else. And then you have these flying things that are supposed to do this task, but while they do this task they are able to do 10 other things.”

Assor: “I had this fear that you often have when you do art- and technology-related stuff; there’s always the fear that people won’t connect to it, in a gallery context. Or it becomes an interactive game type of thing, or the cool factor takes over. But that didn’t happen. People weren’t that freaked out or weirded out, which was surprising to me in a way. They reacted to it very strongly, but none of them questioned having it in a gallery.”

Riestenberg: “The fact that you didn’t yawn after seeing it was a good thing. I don’t spend all day looking at what is the newest coolest thing that people are doing with drones. In that sense, that this drone still creeps people out or makes them excited is a success.”

Crispin: “With drones particularly, there’s such a pre-existing conversation around the technology. I think it’s easier in some ways with a technology that nobody’s heard of, because then they ask you, “what is this?” And then you get to tell them what it is, and control the conversation. Everyone approaches the work with some notion of what drones are. The word ‘drone’ is very broadly used, and often misused.” 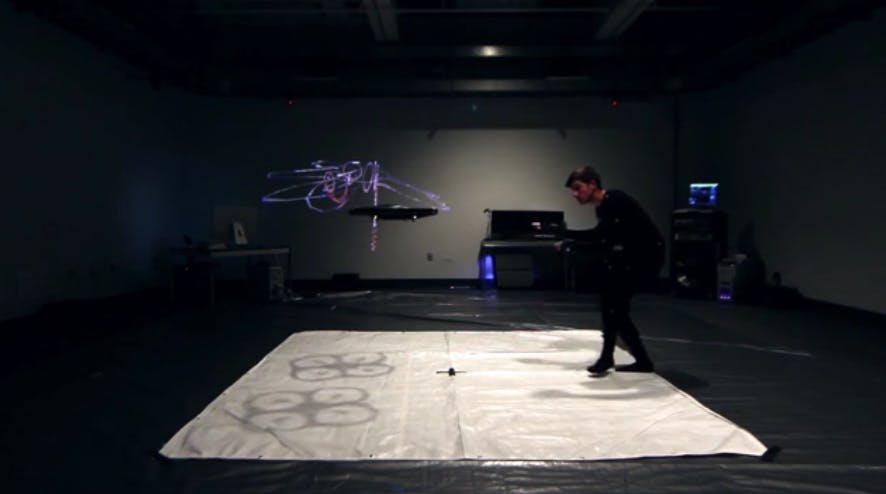 Montgomery: “I don’t pretend to know how what I’m doing will cause the U.S. military to become uninterested in using Predator drones. But, if the technology for unmanned flight is going to be there, let’s all experiment and see how we can use it for things other than killing people or violating people’s civil rights. That’s definitely a part of how I engage with this technology, to use it as a starting point for a conversation.”