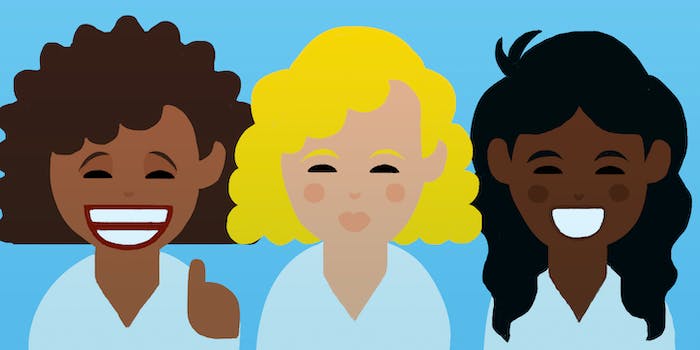 How to get curly-haired emoji on iPhone and Android

It's a bigger deal than you think.

If you’ve been wishing for an emoji library that’s more hairstyle-friendly, today is your lucky day.

In an effort to bring social media awareness to its Love Your Curls campaign, beauty brand Dove is releasing a keyboard for both the Android and iOS platforms that include a set of curly-haired emojis. Users who download the free keyboard will now have access to female icons of varying skin tones, hair color and length, as well as curl style.

In a time when tiny pictures are considered its own language, this update is something that cannot be ignored. “One in three women in the United States have curly or wavy hair, yet there are zero images of these women today in the increasingly common language of emojis,” said Rob Candelino, VP of Haircare at Unilever. “That felt wrong to us, so we are fixing it and hope by doing so, we will continue inspiring all women to love their curls.”

In addition to launching the keyboard, Dove is also partnering with Twitter, the social media platform where emojis are essential for conveying messages in 140 characters or less. Tweets published today with the #LoveYourCurls hashtag will generate a custom curly-haired emoji within the post. Already, the campaign is generating some feel-good buzz:

Thanks to #LoveYourCurls there's finally an emoji I can relate to!! #curlyhair pic.twitter.com/WoQw8oj3Kh

@Dove been trying hard to get my 5yo to #LoveYourCurls thanks for the campaign pic.twitter.com/xN6fEm7vJo

You can download Dove’s curly-haired emoji keyboard today for free from both Google Play and the App Store.