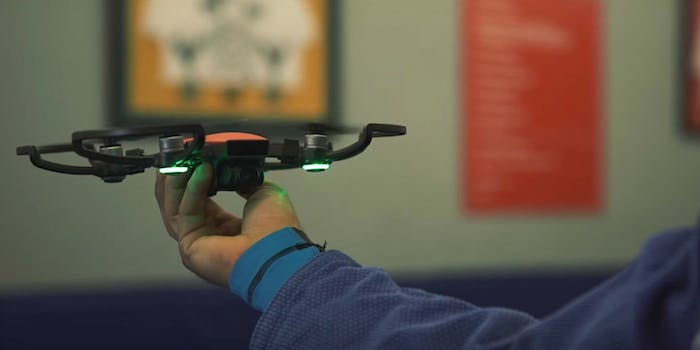 The Spark will start shipping in mid-June for $500.

DJI unveiled a tiny new drone yesterday that will turn you into a Jedi.

The Spark is the company’s cheapest and smallest offering yet, weighing 10.6 ounces—less than a soda can. It is small enough to launch from the palm of your hand, and can be operated using either a traditional remote control, smartphone, or with hand gestures alone.

The drone goes into Gesture Control mode the moment it takes off. This allows users to control it using Jedi hand movements. You can tell the little UAV to fly away from you, take a selfie, or call it back down.

DJI included four “QuickShots,” or 10-second videos taken on pre-programmed flight paths. The Chinese company claims it can fly up to 31 mph and should stay powered for 16 minutes off its lithium-polymer battery.

The selfie drone also retains ActiveTrack and TapFly from the premium Phantom 4 and can be controlled with either gestures or a smartphone from 109 yards away. The Spark can also be used with an accessory to transmit 720p video from up to 1.2 miles away.

The video quality probably won’t be as good as some of the company’s higher-end models, like those in its Phantom series, though. It carries a 12-megapixel camera that shoots video in 1080p, a step down from the 4K-shooting Mavic Pro. But it makes up for those lower specs with 2-axis mechanical image stabilization, a much better solution than the digital or electronic stabilization found on other drones and smartphones like the Google Pixel and Nexus 6P.

It is the only drone the company has released with a list price well under $1,000. It will start at $500, and ship in mid-June. The Spark comes in five colors: Alpine White, Sky Blue, Meadow Green, Lava Red, and Sunrise Yellow.