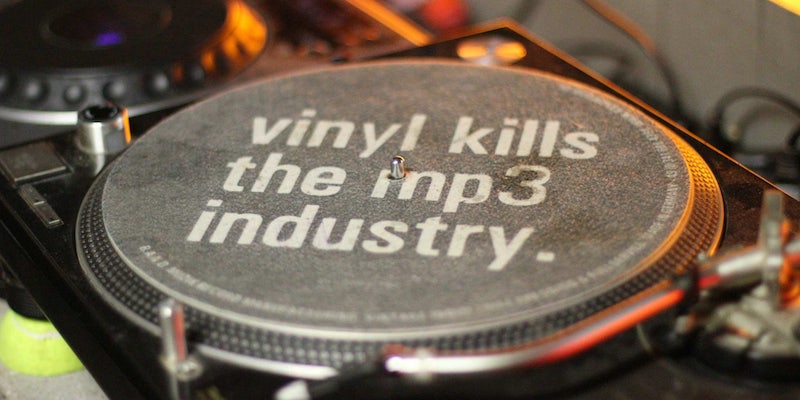 Digital streaming revenues are way up… and uh, so is vinyl

If only you could just stream straight from your record player.

Streaming services may be keeping the music industry afloat, but one form of physical media is still going strong—and it ain’t the eight-track tape.

According to figures released by the RIAA on Monday, music revenue in the United States was essentially flat through the first half of 2015. Total revenue sat at $3.17 billion, down 0.5 percent. Wholesale revenues—the cash distributors and labels actually receive—increased by 0.8 percent to $2.32 billion.

For those fearing on-demand services would act as the stake in the heart of the industry, the latest numbers should ease some of the worry. Digital revenues grew 6.3 percent, generating $2.32 billion.

For proof of performance, look no further than royalty distributors. SoundExchange, which collects digital royalties from services like Pandora and SiriusXM, grew 19.7 percent.

Paid subscription models are up in revenue, too, by 24.9 percent. But the actual number of subscribers leaves a lot to be desired. A reported 200,000 new users joined subscription services like Spotify Premium despite major sales and deeply discounted services cropping up.

Of course, none of the digital figures includes Apple Music, which launched on June 30. It offered everyone three full months of free service, so its figures wouldn’t have factored into the subscriber numbers regardless. By September 30 when the trial period ends and people begin paying (possibly without realizing it), the affects of Apple’s presence can be measured.

While digital continues to climb, the CDs on store shelves are gathering dust. Physical sales as a whole dropped by over 17 percent, but CDs felt it the hardest with the format dropping 31.5 percent.

It’s not all bad for physical media, though. While CD sales plummet, the bigger, older brother of the compact disc is doing quite well for itself. Vinyl sales are up 51.3 percent, generating $226 million. While that’s still less than half the revenue CDs accrued ($494.8 million), the trend lines suggest those figures will meet in the middle at some point.

Here’s a way to capture both audiences: a streaming service that plays music with clicks and pops and makes you flip over your phone after every four tracks before playing the next song.