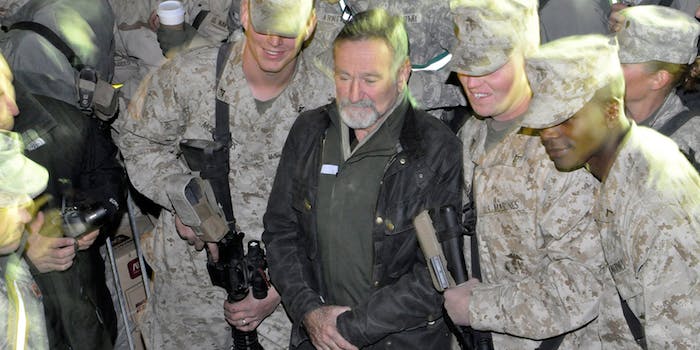 It's not often someone from Ork gets a U.S. military tribute.

The U.S. military lost a “true friend” with this week’s passing of comedian and actor Robin Williams.

“He will be dearly missed by the men and women of DoD—so many of whom were personally touched by his humor and generosity,” it added.

In a blog post on the U.S. military website DoDLive, guest blogger and servicewoman Shannon Collins recounted meeting Williams, who she considered a “childhood hero,” while stationed at Incirlik Air Base, Turkey, in 2002:

“I am honored to have met him and to have spent one joyful day with him, and my heart goes out to his family and friends,” wrote Collins. “May his wonderful spirit continue live on within the body of work he has left behind for us to remember him.”

In his own statement, President Obama called Williams “an airman, a doctor, a genie, a nanny, a president, a professor, a bangarang Peter Pan, and everything in between.”

The adulation is less surprising in light of the fact that Williams was a fixture of military tours for decades, entertaining, according to one count, a total of almost 90,000 troops in 13 different countries. The United Service Organization (USO), unsurprisingly, gave Williams its own Facebook tribute, saying, “He will always be a part of our USO family and will be sorely missed.”

Photo via US Army Corps of Engineers/Flickr (CC BY SA 2.0)