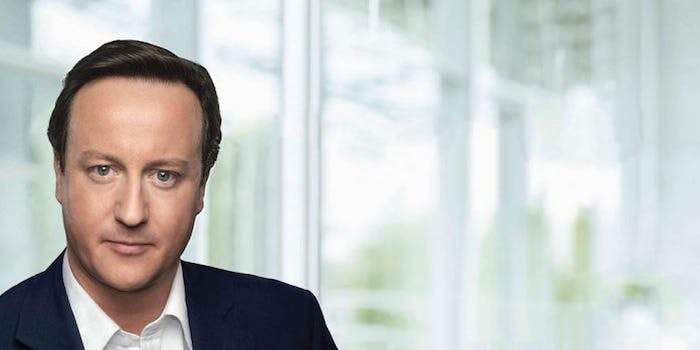 David Cameron stars in a perfect parody Look Back video

The opposition Labour party has helpfully created a video for the U.K. prime minister.

A former advertising executive, opponents often accused Cameron of being a style-over-substance kind of guy, who rode into office on a wave of populist PR nonsense such as hugging huskies in the Arctic, hugging ‘hoodies’ on U.K. council estates, and not cutting the National Health Service.

Now after four years in office, the Conservative leader has plenty of substantive policies for which he is hated by opponents. Cameron’s government has cut environmental subsidies, hammered the poorest with benefits cuts, privatized much of the health service, and even tried to implement a tax on hot pastry snacks.

Inspired by Facebook’s Look Back feature, the opposition Labour party has produced a montage of Cameron’s premiership. “A look back at a Tory government” is complete with ironically uplifting music and also takes a swipe at the Conservatives’coalition partners the Liberal Democrats.


The Liberal Democrats’ leader, Nick Clegg, has become a figure of ridicule in U.K. politics for many capitulations to the Tories since becoming deputy prime minister as part of a power-sharing agreement after no party won the 2010 election.

Most notably Clegg signed a pledge to vote against rises in university tuition fees. But once in government coalition Clegg and other Lib Dems voted to treble fees to £9,000 a year, an action which has earned him a place alongside Cameron in the spoof video.

Ed Miliband’s Labour party will be one of the least inspiring to succeed in an election if it maintains its poll lead into 2015. Miliband himself is regarded as a weak leader who is often compared to the TV characters Wallace from Wallace and Gromit and Mr. Bean.

Miliband’s opposition has been quietly supportive of many of the most contentious issues such as welfare reform and minimal bank regulation. All three parties appear to be hoping that while the manifestos suck harder in 2015, the videos get slicker.