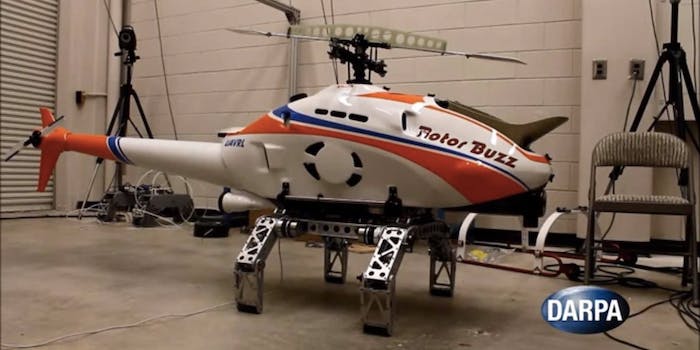 The helicopter of the future will have robotic spider legs

DARPA has a dedicated program to making helicopters that can land almost anywhere.

DARPA has unveiled a working concept design for a helicopter with robotic spider legs.

The secretive government agency’s Mission Adaptive Rotor project aims to more fully unlock the capabilities of helicopters. DARPA gave the Georgia Institute of Technology an undisclosed sum to design a helicopter landing system that could handle touching down in a variety of unaccommodating environments, and the fruits of that labor are now on display.

Using these special legs, the helicopters of the future might easily make landings on steep hills or on ships in choppy water. Here are a few examples of what these landings might look like:

Until the legs can be tested on a full-size helicopter, Georgia Tech is perfecting them on a large unmanned drone. Here it demonstrates a landing that would be completely impossible for conventional helicopters:

These legs operate independently of each other, and each one has an embedded distance sensor to measure how near it is to the ground. They automatically put themselves in the perfect position to make a smooth, level landing every time. When not in use, the legs fold up and out of the way.

This could drastically affect helicopter design in the future. Helicopters are already quite nimble in the sky, but their landing gear is rather unremarkable—usually little more than two long skids, permanently and immovably fixed to the bottom of the aircraft. That means helicopters require plenty of space and a flat-as-possible surface to land safely.

Previous solutions to landing helicopters in complex environments have not been as sophisticated. It was common practice during the Vietnam War to drop 15,000-pound bombs called daisy-cutters in the middle of the jungle, leveling trees to make the terrain friendlier to helicopters. Georgia Tech’s design, by contrast, can take off and land on inclines with a slope up to 20 degrees. It reduces the risk of damage to the aircraft during hard landings and generally makes a helicopter vastly more useful with “only a modest increase” in weight.