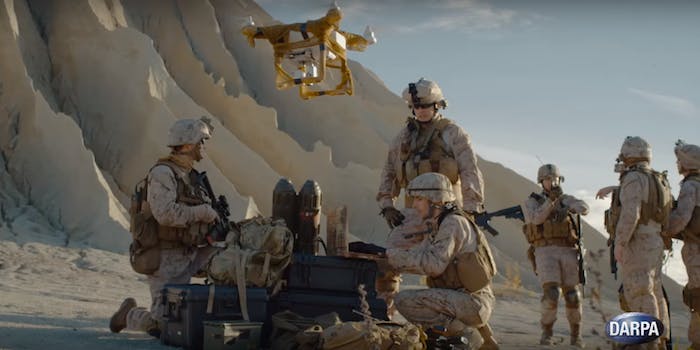 U.S. soldiers could soon be marching into battle with a swarm of more than 250 drones flying overhead.

The Defense Advanced Research Projects Agency (DARPA) is looking for robotics developers to come up with a solution for deploying a swarm of flying and crawling drones into small unit-infantry forces.

The independent branch of the U.S. Department of Defense responsible for researching emerging technologies posted an overview of its drone program, dubbed OFFensive Swarm-Enabled Tactics (OFFSET), earlier this month. It plans to create teams tasked with designing, developing, and deploying the army of robots.

“Urban canyons—with their high vertical structures, tight spaces and limited lines of sight—constrain military communications, mobility and tactics in the best of times,” DARPA told Motherboard. “Unmanned air vehicles and unmanned ground vehicles have long proven beneficial in such difficult urban environs. But their value to ground troops could be vastly amplified if troops could control scores or even hundreds—’swarms’—of these robotic units at the same time.”

Recent advances in consumer technology and decreasing cost to build quadcopters has made drone management a more pressing problem than their production. Researchers enrolled in OFFSET will focus on tactics, autonomy, and human interface as well as experimenting and creating a virtual environment for its swarms. By the end of its program, DARPA wants an “advanced human-swarm interface” that will allow soldiers to effectively control hundreds of robots, even in the most difficult conditions, using emerging inputs like augmented reality, virtual reality, voice, or touch.

The swarms will need to function in dense urban environments that are up to eight blocks in size for a period of more than six hours. DARPA wants developers to work for six months at a time on different projects. The goal of the first six months is to make 50 aerial drones work together to isolate an “urban objective” within an area of two blocks for 15 to 30 minutes.

This isn’t the first time the military has looked to drones to solve the problems of maneuvering troops in urban environments. In 2014, DARPA created a program to develop “a new class of algorithms to enable small, unmanned aerial vehicles to quickly navigate a labyrinth of rooms, stairways, and corridors or other obstacle-filled environments without a remote pilot.” Earlier this month, the Marine Crops started issuing small quadcopters to its infantry troops.