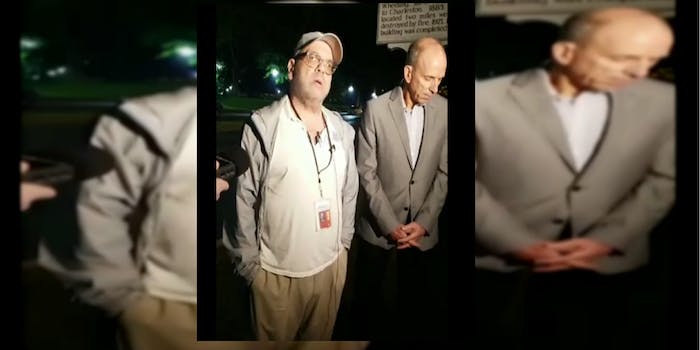 'I am supposed to go and find out if somebody is going to be affected by this healthcare law,' the reporter said after being released from jail.

The reporter who was arrested in West Virginia at a healthcare event on Tuesday said he was “just doing his job” before he was handcuffed by Capitol Police.

Dan Heyman, who covers the region for Public News Service, was attempting to ask U.S. Health and Human Services Secretary Tom Price a question during a visit at the state capitol, he said in a press conference after being released from jail.

Heyman said he was attempting to ask Price whether domestic violence would be listed as a pre-existing condition under the American Health Care Act (AHCA), the House GOP alternative to the Affordable Care Act.

“This is my job, this is what I’m supposed to do,” he said. “I am supposed to go and find out if somebody is going to be affected by this healthcare law.”

Heyman, who has been with Public News Service since 2009, said he was recording on his phone when he reached out past Price’s staffers and began asking his question “a number of times.”

“He did not answer,” Heyman said. “At some point I think they decided I was just too persistent in asking this question and trying to do my job, so they arrested me.”

Capitol police took him aside, handcuffed him and brought him into an office before reading his Miranda rights, Heyman said.

The Committee to Protect Journalists said “concerned” about the reports of Heyman’s arrest. On Wednesday, they called his arrest “an affront to press freedom.”

A criminal complaint obtained by Jake Zuckerman, of the Charleston Gazette-Mail, states that Heyman was “aggressively breaching the Secret Service agents to the point where the agents were forced to remove him a couple of times from the area” and caused a “disturbance by yelling questions at Ms. Conway and Secretary Price.”

A video of the arrest, shot by Valerie Woody with the West Virginia Citizens Action Group. 3/3 pic.twitter.com/Q1bOSotNEe

Heyman was charged with willful disruption of government processes and later posted a $5,000 bond.

Tim DiPiero, Heyman’s lawyer, said during the press conference he had never heard of someone being arrested for yelling “too loud.”

“We just don’t understand why he got arrested,” he said. “It just seems kind of way over the top.”

Heyman said no one who identified themselves as police officers told him he could not be in the area where he was attempting to ask Price a question.

The West Virginia Chapter of the American Civil Liberties Union held a brief press conference on Tuesday night where they condemned Heyman’s arrest.

“Mr. Heyman’s arrest is a blatant attempt to chill an independent, free press,” the ACLU said in a statement. “The charges against him are outrageous, and they must be dropped immediately.”

Update 8:20am CT, Sept. 7: West Virginia prosecutors announced on Sept. 6 that they have dropped the charges against Heyman.

Heyman was facing six months of jail time. The state, after a “careful review of the facts,” determined that Heyman’s conduct was not unlawful.

“Facing six months of jail time for asking a question as a journalist was pretty troubling,” Heyman said in a statement. “I don’t want my arrest to have a chilling effect on other reporters because we all need to keep asking the tough questions of elected officials.”