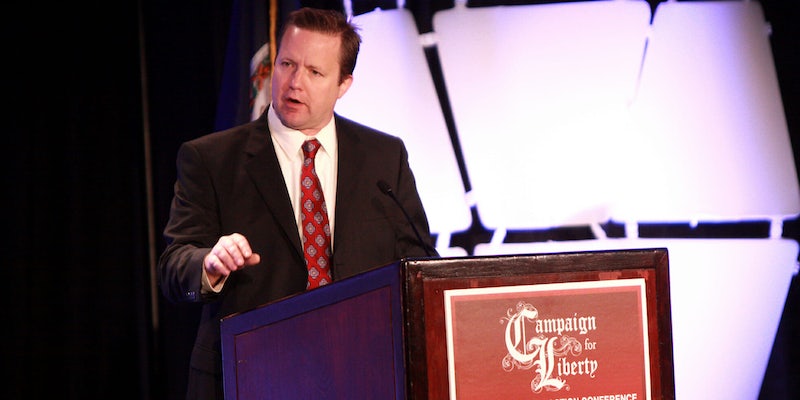 Since winning his party’s U.S. Senate nomination, Virginia Republican Corey Stewart has tried to paint his Democratic midterm political rival Sen. Tim Kaine as an apologist for violent left-wing radicals and a supporter of the Antifa movement.

A quick browse of Stewart’s official Twitter account unearths dozens of tweets sporting hashtags such as #AntifaKaine and #TimKaineIsAntifa.

I have always and promise to stand by President Trump and his policies. #AntifaKaine will obstruct

I stand with President Trump on his agenda, his war on #FakeNews, and his mission to protect the American people from terrorism, domestic and foreign.#TimKaineIsAntifa

Just this week Stewart intensified his amplification of the narrative by using a brief heavily-edited video that cuts between contextless comments made by Kaine and scenes of violent rioting.

The attacks are grounded in a narrative that has been kicking around since the senator’s son, Linwood Michael Kaine, was arrested at a counter-protest outside a Donald Trump rally in 2017. He was charged, fined $236, and sentenced to a year’s probation.

The story became a useful means by which Stewart could attack Virginia’s Democratic senator. In this tweet, just one day after winning Virginia’s Republican Senate primary, Stewart tweeted about Kaine’s support for left-wing violence and his refusal to condemn his son.

Virginia's sitting senator approves of and even applauds his son's participation in a known terrorist organization, #Antifa.

Let that sink in. https://t.co/7foEPLKYHT

Despite Stewart’s claims, Kaine has denounced Antifa several times since his son’s arrest.

In September, writing to his constituents, Kaine wrote: “I condemn all violence at any political demonstration, including any violent activities by members of Antifa.”

“We cannot tolerate violence by anyone, of any political viewpoint, if we truly embrace the principles expressed in the Constitution,” the Democrat wrote in a CNN opinion editorial that same month.

In a January 2018, in an open letter that was even published by right-wing media organizations like Gateway Pundit and Breitbart News, Kaine denounced violent protest.

“The First Amendment to the U.S. Constitution protects our freedom of speech, press, assembly, petition, and religion, but it does not protect violence or intimidating others into forfeiting their rights,” he wrote.

Still, this has not deterred Stewart from heightening his bid to tie Kaine to far left radicalism.

On Thursday, the Republican posted a historical image edited to feature the senator, showing what appeared to be Kaine as a young man sitting beside armed guerrillas. The photo was captioned: “Tim Kaine worked in Honduras to promote his radical socialist ideology.”

Virginia and our Nation deserve better

Please support me on Nov 6 & let’s stop the violence of the Left
. pic.twitter.com/Z5LbHqxkH8

It’s true that Kaine did travel to Honduras in 1974 on a Jesuit mission trip associated with his high school and that the clipping of him, spliced into the above image, was taken on that trip.

The Washington Post was quick to point out, however, that the image as posted was a fake. In fact, the background picture was not of left-wing guerrillas in Honduras but of right-wing contra commandos in Nicaragua from 1987.

Stewart then tweeted the Post article on Friday and humorously noted that his team was “still going through Tim Kaine’s old albums.”

“Just wait until you see the photo of him playing golf with Karl Marx!” he wrote.

Just a few minutes later, he posted the following:

Not only do Stewart’s attacks dismiss Kaine’s statements against violence and his condemnation of Antifa, the making of his case continues to lean more heavily on tactics that University of Mary Washington political science professor Stephen J. Farnsworth criticized as “deep desperation.”

“The best way to pursue a voter is with legitimate evidence,” the academic told the Post. “If that’s not working, you’ve got a problem as a candidate.”