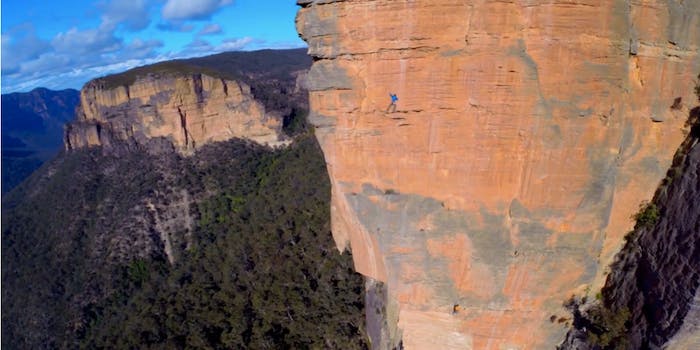 Unmanned aerial vehicles (UAVs) continue their meteoric rise in popularity, even as the Federal Aviation Administration (FAA) struggles with how to regulate them. The cheaper drone technology gets, the easier it becomes to capture the kind of stunning footage previously reserved for big-budget Hollywood films.

Here are our favorite drone-assisted images from 2014, which might be called “The Year of the Drone.”

One intrepid pilot took his drone into the mouth of the Bárðarbunga volcano in Iceland. The environment was so hot that the GoPro attached to the DJI Phantom Drone actually melted.

Ghost+Cow Films combined sex, drones, and San Francisco to create an epic video in which sweeping nature shots are dotted with people engaging in some NSFW activity.

3. Drones in the Alaskan wilderness

Not only did videographer Mark Richardson capture beautiful photos and videos of Alaska, but he also showed other people how to do it. His online aerial photography and videography course is available on Udemy for $99.

4. The drone that pissed off a punk band

Some performers don’t want drones anywhere near their concerts. One drone photographer in Michigan had his drone knocked out of the sky by the bassist for punk band Trash Talk, who lobbed three cocktails at the UAV.

During September’s pro-democracy protests in Hong Kong, drones took to the skies to document just how massive the peaceful protests were. Drone footage caught police using tear gas and pepper spray in an attempt to disperse protesters.

A group of nature-loving daredevils who scaled the Blue Mountains in New South Wales, Australia, documented their outdoor adventures, from rock climbing to BASE jumping to splashing through waterfalls.

Because taking a selfie with a front-facing camera just isn’t as cool as taking one with a drone. These three guys and their dogs nailed the drone selfie and capped it off with an epic shot of San Francisco from the top of Bernal Hill.

In a few short weeks, we’ll probably watch another batch of drones fly into New Year’s Eve fireworks, because fireworks are a favorite target of daring drone photographers. The explosive shows are even better when viewed through the lens of a camera mounted on a flying device.