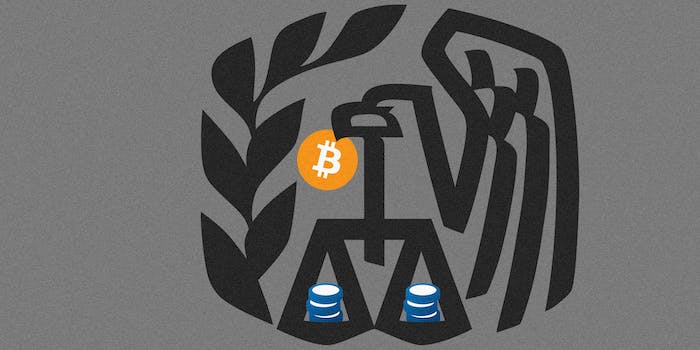 Coinbase plans to fight back.

Update 1.30pm CT, Feb. 27: Last week, on Feb. 23, Bitcoin wallet service Coinbase notified approximately 13,000 of its customers that it had been ordered by the United States District Court for the Northern District of California to supply the IRS with information on their accounts. The records include “taxpayer ID, name, birth date, address, and historical transaction records” made by users who made account transactions of more than $20,000 in a single year between 2013 and 2015.

The ruling, however, represents a compromise on the original IRS summons of December 2016 which demanded the records of over 500,000 Coinbase customers. In a press release, the company described how it challenged this original summons in a lengthy court battle to protect its customers’ privacy “from unwarranted intrusions from the government.”

The court ruling, the company said, “represents a partial, but still significant, victory for Coinbase and its customers” in that it must now “produce only certain limited categories of information from the accounts of approximately 13,000 customers”—rather than the data of half a million customers.

Coinbase told its affected customers that it expects to produce the information within the next 21 days, recommending that those customers contact an attorney to seek legal advice and a tax advisor for financial advice.

The taxman is coming for cryptocurrency users after a ruling on Wednesday, made by a federal judge in a Northern California District Court, authorized the Internal Revenue Service to serve a summons to Bitcoin wallet service Coinbase.

The ‘John Doe’ summons will require Coinbase to hand over its data for customers who transferred currency between 2013 and 2015. While the data does not include personally identifiable information, it comes as part of a wider IRS investigation into possible fraud on the part of cryptocurrency investors.

“The taxpayers being investigated have not been or may not be complying with U.S. internal revenue laws requiring the reporting of taxable income from virtual-currency transactions,” the court summons reads.

Coinbase is the largest Bitcoin exchange in the U.S, facilitating thousands of cryptocurrency transactions daily as well as the creation of Bitcoin wallets or accounts. The San Francisco-based firm was caught up in the IRS’ investigation when an agent identified three cases of fraud that had utilized cryptocurrency for tax evasion purposes, two of which involved Coinbase account holders. According to the summons, the court found this to be a “reasonable basis” to believe that other users were evading taxes.

The exponential growth of cryptocurrency investment has made record keeping and the reporting of those earnings a problem. As far as the law is concerned, there is no grey area here: Income made through cryptocurrency is taxable.

Principal Deputy Assistant Attorney General Caroline D. Ciraolo, head of the Department of Justice’s Tax Division, spoke in Forbes about the ruling: “Tools like the John Doe summons authorized today send the clear message to U.S. taxpayers that whatever form of currency they use – bitcoin or traditional dollars and cents – we will work to ensure that they are fully reporting their income and paying their fair share of taxes,” she said.

Coinbase, on the other hand, doesn’t plan to comply quietly. In a blog written before when the petition was filed, the company outlined its plans to fight the subpoena.

The Daily Dot has reached out to Coinbase for comment.

Read the granted court order in full below: