How dictionary-makers are building an encyclopedia of Internet slang

As the lexicon of the Web boils over into our daily lives, designated word scribes hurry to keep up. On Tuesday, Merriam-Webster announced it added 1,700 entries to the Unabridged Dictionary—the huge dictionary available online through a subscription, a full three times larger than the regular hardcover Merriam-Webster Collegiate Dictionary.

Among them were many decidedly Web-inspired words: clickbait , emoji, net neutrality, meme, WTF, NSFW, and photobomb all made the cut this round.

“We don’t even know if there will ever exist a new edition in print when this project is done, because this time is so far distant, we’re not sure what the market will be for a very, very big dictionary,” Peter Sokolowski, editor at large of Merriam-Webster, said in an interview with the Daily Dot.

Humanity’s vocabulary is growing quickly, and the project to add every word we use aloud to the written record will take many years. Given that breadth, we might not see an unabridged dictionary with the new words ever published. “Selfie,” and “clickbait” will remain online, but could never make their way to paper.

But what determines when a word is good enough to make it into the official dictionary of the National Spelling Bee and a regularly referenced book for Supreme Court cases? According to Sokolowski it all comes down to three things: widespread use, frequent use, and a clear meaning.

“In the case of something like clickbait, that’s obviously used a lot in social media, but it’s also used in print and all kinds of places,” Sokolowski said. “We’re taking our evidence from more than just online sources, but other sources as well.”

Merriam-Webster is in the process of updating the Unabridged Dictionary. It currently defines 500,000 words, but as language evolves, new words are created each day. In attempting to document them all, the organization is releasing new material two to three times per year.

As you scroll through each new update, you’ll likely see a reference to where the word was used in modern media. It varies from radio, to print publications, to online media. It’s not enough for the tweeting and texting population to adopt slang like “emoji,” but for The Boston Globe and TIME to write about it, too.

We can thank the Internet for more than providing us with new words—it also expands the opportunities to define them, and educate readers on more than just a simple definition that exists in multiple lines on paper. It’s possible to put many example sentences and quotations, and even an audio player to help people understand how to say a word, not just what it looks like. 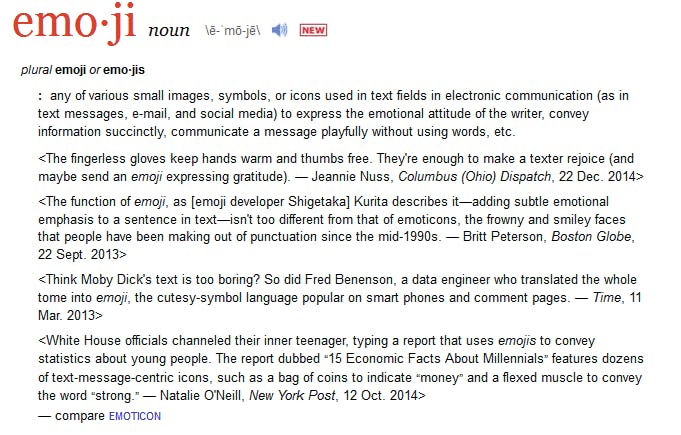 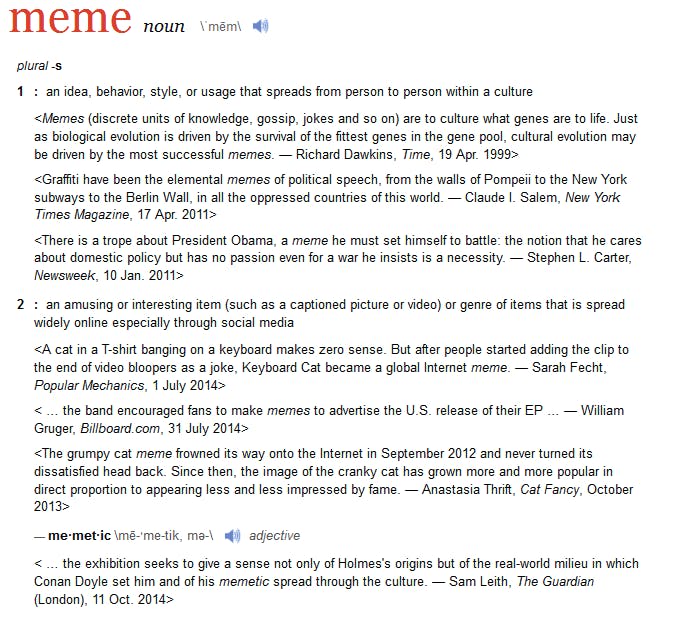 The Merriam-Webster Unabridged Dictionary isn’t as robust online as Oxford Dictionaries—a broader offshoot of the Oxford English Dictionary—which includes definitions for words like “fap,” “subtweet,” and “listicle.” Oxford’s version added “clickbait” last year. But it’s likely only a matter of time before Merriam-Webster catches up.

In the meantime, we’d like to make a few suggestions for words that should be added to both.

snap (n.): A message sent through the messaging ephemeral messaging service Snapchat that might or might not actually disappear.

He sent me a selfie snap last night, but I made sure to screenshot it for later.

bae (n.): A term of endearment used to describe one’s crush, best friend, or significant other. Stands for “before anyone else.” Often abused by brands.

poke (v.): Attempting to get someone’s attention through an often unused feature of Facebook. Also, a failed Facebook application. Acceptable synonym: “notice me”

I just poked her on Facebook because she hasn’t responded to my messages.

As far as the future of a hardcover dictionary approaching 15 pounds? Sokolowski said it could end up becoming a small set of books. However, we know how that turned out for the Encyclopedia Britannica, so who knows what the market will be for knowledge put to paper years down the line. But its purpose is not going anywhere.

“This is the largest dictionary of American English by far,” Sokolowski said. “So it tends to be the standard for advanced use of dictionaries…specific vocabulary that’s beyond what’s in the found in the collegiate dictionary. When you get into botanical terms, chemical terms, the Unabridged Dictionary is an extremely rich resource.”

And yes, it’s there for clickbait, too.