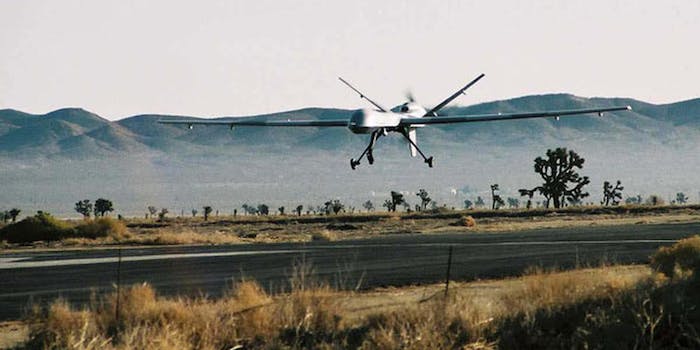 It only took a three-year court battle to get the government to publicly explain when it can kill American citizens with drones.

On Monday, after years of legal wrangling, a federal court finally released a 2010 memo from the U.S. Justice Department’s Office of Legal Counsel laying out the government’s justification for the targeted killing of Anwar al-Awlaki. Al-Awlaki, who was killed in a drone strike in Yemen the following year, was a New Mexico-born U.S. citizen who became a radical Islamist cleric and leader in the terrorist group al-Qaeda in the Arabian Peninsula (AQAP).

The publication of this memo is the end result of a three-year legal battle that saw the Obama administration claiming the document’s release could endanger national security on one side and the American Civil Liberties Union (ACLU), along with a pair of New York Times reporters, pushing for greater transparency on the other.

While the memo is an important document in the war on terror, laying out the government’s legal case for targeted killings of American citizens without due process, it also represents something far more fundamental: the first official acknowledgement of the CIA’s role in the day-to-day operation of the drone program.

“Amazingly, this publication of the court’s opinion today marks the end of the line for the government claim that the CIA hadn’t confirmed or denied whether it had actually been operationally involved wither with the al-Awlaki killing or with the drone program in general,” said ACLU National Security Fellow Brett Kaufman.

The CIA’s participation in drone strikes has been public knowledge for years; however, the government’s steadfast refusal to officially confirm or deny this fact in court has made it difficult for groups like the ACLU to procure other crucial pieces of information about program.

“The CIA has maintained that it cannot describe or release any responsive documents that it has about drones or targeted killing because to do so would reveal classified information. The most important bit of classified information is that the CIA was operating drones,” Kaufman explained. “When the government is withholding information on the basis of official secrets, whether a secret is official or unofficial is extremely important.”

Kaufman charged that the government has used its inability to disclose that the CIA was involved in the drone program to avoid revealing information such as the number of civilian casualties the drone campaign has caused in countries like Pakistan and Afghanistan.

Since the CIA isn’t the only government agency involved in drone strikes, the ACLU initially attempted to get access to this memo through other agencies like the Department of Justice or the Department of Defense. Nevertheless, no matter the channel the ACLU attempted to go through, the legal secrecy of the CIA’s involvement always presented a roadblock.

While this week represents the first time the public had seen the memo, members of Congress were recently given access to it after Senator Rand Paul (R–Kentucky) threatened to filibuster Barron’s judicial nomination unless he, and other legislators, were first able to read the former Office of Legal Counsel attorney’s targeted killing memo.

Al-Awlaki wasn’t the only American killed in the 2011 drone strike that led to his death. Samir Khan, who was formerly an editor of Al Qaeda’s jihadi magazine Inspire, was also killed. U.S. officials have said that Khan wasn’t intentionally targeted in the attack. Al-Awlaki’s son was killed a few days in another attack.

After he was added to the country’s targeted killing list but before the fatal drone strike, al-Awlaki’s father sued the government arguing that it had no right to kill his son, an American citizen, without due process. His suit was dismissed by a U.S. District judge who ruled that domestic courts lacked the jurisdiction to intervene on specific military decisions.

AQAP has been linked to a number of terror plots against the United States, including the failed 2009 ‟underwear bomb” attempt to take down an airplane over Detroit that was reportedly personally directed by al-Awlaki.

The ACLU first sought access to Barron’s memo in 2011, shortly after al-Awlaki’s death. The request was never met with an adequate response so the group filed a lawsuit a few months later. The ACLU’s suit, which was eventually combined with similar legal actions filed by the Times reporters, argued that the administration had no justification to keep the memo secret because government officials had publicly talked about its existence.

In January, a district court rejected this argument and sided with the government—ruling that, even though officials had talked about what was in the memo, that alone wasn’t enough to waive the government’s claim to secrecy. Yet, the court didn’t seem entirely comfortable with the implications of its ruling; the presiding judge wrote:

[There is] no way around the thicket of laws and precedents that effectively allow the [government] to proclaim as perfectly lawful certain actions that seem on their face incompatible with our Constitution and laws, while keeping the reasons for their conclusion a secret…The Alice-in-Wonderland nature of this pronouncement is not lost on me.

The ACLU appealed the decision and the question of whether or not to release the memo was taken up by the Second Circuit Court of Appeals. In April of this year, this higher court overturned the lower court’s decision, insisting that the administration had an obligation to release the memo. The court then engaged in a prolonged back-and-forth with the administration over which parts of the memo could be left kept secret and which parts had to be made public. Both parties came to an agreement late last week about precisely what information was acceptable to reveal and a redacted version of the memo was finally released Monday morning.

“The release of this memo represents an overdue but nonetheless crucial step towards transparency. There are few questions more important than the question of when the government has the authority to kill its own citizens,” ACLU Deputy Legal Director Jameel Jaffer said in a statement. “This memo’s release will allow the public to better understand the scope and implications of the authority the government is claiming.”

Barron’s defense of the state’s ability to carry out targeted strikes on citizens is based on something called ‟public authority justification,” which holds that, even though the direct targeting of a U.S. citizen might otherwise be against the law, the CIA’s actions against al-Awlaki is permitted because it falls under the agency’s broader authority to conduct the war on terror. Barron argued that, because Congress allowed the President to use force against the al-Qaeda following the 9/11 attacks, targeted killings of U.S. citizens believed to be working with al-Qaeda is okay, even though, as U.S. citizens, they would typically be afforded constitutional due process protections.

‟We believe the Authorization for Use of Military Force Against Terrorists authority to use lethal force abroad also may apply in appropriate circumstances to a United States citizen who is part of the forces of an enemy organization within the scope of the force authorization,” Barron wrote, adding that al-Awlaki’s is a special case not previously addressed directly in U.S. law. “[Since] al-Awlaki is a United States citizen… there is no precedent directly addressing the question in circumstances such as those present here.”

Despite reserving the Executive Branch’s authority to kill U.S. citizens, Barron noted that al-Awlaki’s killing was justified under a specific set of circumstances that made capturing him and then trying him in a standard U.S. court particularly difficult. “In addition to the nature of the threat posed by al-Awlaki’s activities, both agencies here have represented that they intend to capture rather than target al-Awlaki if feasible,” the memo reads. ‟Yet we also understand that an operation by either agency to capture al-Awlaki in Yemen would be infeasible at this time.”

In addition to an inability to capture al-Awlaki alive, the government’s case for taking him out with a drone strike is also based on the argument that he posed an ‟imminent” threat to the United States, which is a requirement to justifiably carry out a targeted killing in a non-battlefield situation under international law. However, figuring out precisely what the government means by “imminent” is something Kaufman hopes the removal of the CIA roadblock will eventually help make public.

In a white paper obtained by NBC News last year, the government argued, “the condition that an operational leader present an ‘imminent’ threat of violent attack against the United States does not require the United States to have clear evidence that a specific attack on U.S. persons and interests will take place in the immediate future.”

“When you start to unpack that definition, it starts to strip away the whole concept of imminence. It doesn’t need to contain any information about an upcoming attack. Basically you just need general information that there’s a general threat present at some future point in time,” Kaufman said. ‟Outside of the white paper, the government hasn’t explained at all what it means by imminence, so we’re still looking for that.”

Kaufman hopes that additional documents regarding the justification for the targeted killings, whose existence was hinted by the court, will yield a more complete picture of what the government believes qualifies an imminent threat to the safety of the United States. He added that there was little in the memo explaining specifically why officials believed the capture of al-Aulaqi wasn’t feasible.

Many sections of the memo remained redacted. The Washington Post speculates that the material stripped from the version ultimately released to the public included a direct analysis as to why killing al-Aulaqi wouldn’t violate the Fourth Amendment.

CIA officials did not immediately respond to a request for comment

Read the memo and associated court documents for yourself here—the memo itself starts on page 67.

Photo by US Air Force/Wikimedia Commons