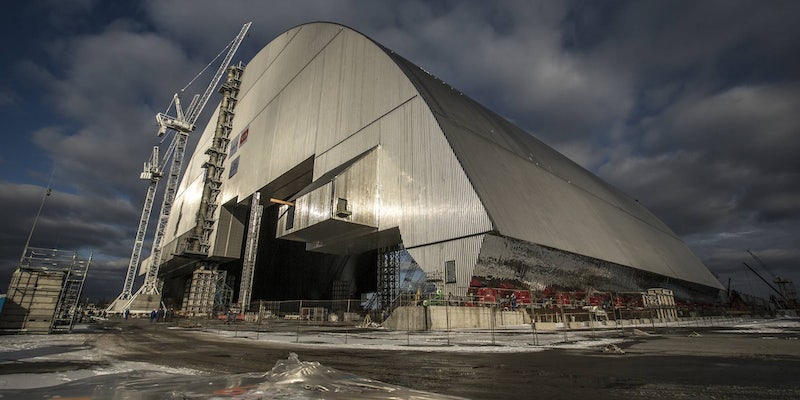 Photo via European Bank for Reconstruction and Development

The structure has been designed to withstand extreme forces of nature.

Ukraine unveiled its massive, $1.5 billion New Safe Confinement shield at the Chernobyl disaster site on Tuesday morning. The NSC was funded by 40 different countries and is the largest movable metal structure on Earth.

The structure has been designed to withstand extreme forces of nature, including a 6.0 earthquake or up to a class 3 tornado. It’s 354 feet tall and 843 feet wide.

When reactor 4 exploded at Chernobyl in 1986, the Soviet government evacuated the surrounding 18-mile radius and quickly began building a containment structure around the blast. Due to the rushed nature of the original structure, it lacked proper corrosion protection and was deemed at risk of collapse by the late ’90s. While repairs have been made in the ensuing years, the original structure was badly in need of being replaced.

The NSC will address the issues that continue to plague the disaster site, such as build-ups of radioactive water in the reactor’s basement. By creating a waterproof seal around the building, and including a ventilation system that will keep the humidity level inside from rising above 40 percent, designers hope the remaining water will dry out. Additional construction will continue through 2017 to make the shelter completely airtight.

NSC is designed to protect the area for the next 100 years, keeping radiation inside and allowing teams time to disassemble the original structure inside the new dome. This will be accomplished using to two special remote-controlled cranes that are housed within the NSC. These cranes will dismantle the original reactor and containing structures for disposal in the future.

You can watch a time-lapse video of the NSC’s construction below.

Correction: An earlier version of this story misstated where the Chernobyl reactor site is located; while it was a part of the Soviet Union at the time of its explosion, it is in present-day Ukraine.