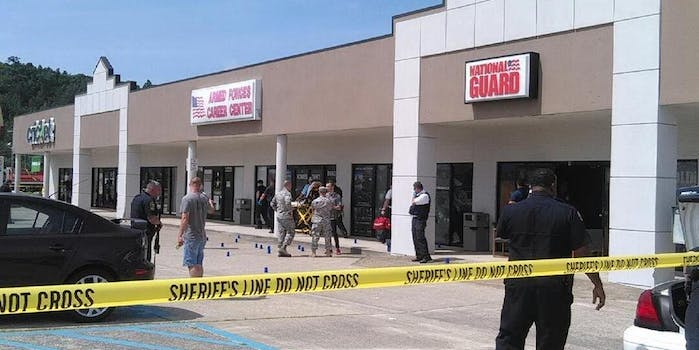 Does Mohammad Youssef Abdulazeez's blog reveal his motive? Only time will tell.

The man who police say killed four people at a naval base in Tennessee on Thursday blogged about Islam days before his rampage, which some believe provides insights into what motivated the massacre.

On Thursday, 24-year-old Mohammad Youssef Abdulazeez opened fire at a Hixson, Tennessee, military recruitment office, according to law-enforcement authorities. He killed four U.S. marines, police say, and wounded three civilians. He was killed shortly after a police chase to a naval reserve center.

The Federal Bureau of Investigation is treating the shooting as an “act of domestic terrorism,” and they are investigating his extended trip to Jordan last year, the Wall Street Journal reports. Still, authorities say, the motive behind the attack is unclear.

In a rush to contextualize the gruesome and random act, Abdulazeez’s motives and history became an immediate media priority. The Kuwait-born Jordan national is reportedly a naturalized U.S. citizen. He graduated from University of Chattanooga. He was a “great student,” according to his former high school wrestling coach, Kevin Emily. He was religious, Emily said, but his respectful, humble demeanor raised no “red flags.” He’d been arrested for driving under the influence in April. He was a fierce mixed-martial arts fighter.

Abdulazeez’s blog, uncovered by the terrorism watchdog organization SITE Intelligence Group, shows a young man who believed that “life is short and bitter,” and that Muslims should not let “the opportunity to submit to Allah … pass you by.” Below are quotes from two posts from July 13, reported by the Daily Beast, that seem to further reveal insight into how he viewed life:

“I would imagine that any sane person would devote their time to mastering the information on the study guide and stay patient with their studies, only giving time for the other things around to keep themselves focused on passing the exam. … They would do this because they know and have been told that they will be rewarded with pleasures that they have never seen.”

“Understanding Islam: The Story of the Three Blind Men”

Muslims have a “certain understanding of Islam and keep a tunnel vision of what we think Islam is … towards the end of the lives were either a mayor of a town, governor of a state, or leader of an army at the frontlines. … We ask Allah to make us follow their path. … To give us a complete understanding of the message of Islam, and the strength the live by this knowledge, and to know what role we need to play to establish Islam in the world.”

In many respects, Abdulazeez appears to have been a regular suburban American boy who lived at home with his parents in a subdivision called Colonial Shores near Chattanooga. His neighbors recalled to the New York Times a normal teenager who played whiffle ball with the neighborhood kids, was quiet and tough. And he appeared to have a winking sense of humor about living as a Muslim man in the United States.

A senior yearbook quote reveals as much: “My name causes national security alerts. What does yours do?”