How a chatbot is helping homeless people find housing

A bot will optimize applications.

The 19-year-old behind the viral service that helps you get out of parking tickets is now having his robot lawyers tackle a more difficult social issue: homelessness.

Joshua Browder’s DoNotPay, an online bot that has automatically challenged 160,000 parking tickets, was born out of his own frustration at accruing parking tickets in the UK. The side project that put his expertise with the local parking laws to good use became a viral service available in the UK and New York.

“When I got all these parking tickets and the parking ticket bot was so successful, people began emailing me to see if I can help with a whole range of legal issues,” Browder said in an interview. “I began to get really heartfelt emails relating to evictions, bankruptcies, and repossessions, and at the time I felt bad I couldn’t help. That made me decide to expand this to help homeless people.”

Browder, a student at Stanford studying computer science and economics, worked with homeless non-profit organizations and lawyers in Britain to implement automated tools to complete and file claims for government housing. (He previously built mobile applications for six human rights groups like Freedom House that assisted him with introductions.)

Applicants create an account on DoNotPay, answer questions relating to their current personal situation, and the website generates an application that optimizes an applicant’s chances of receiving affordable housing. 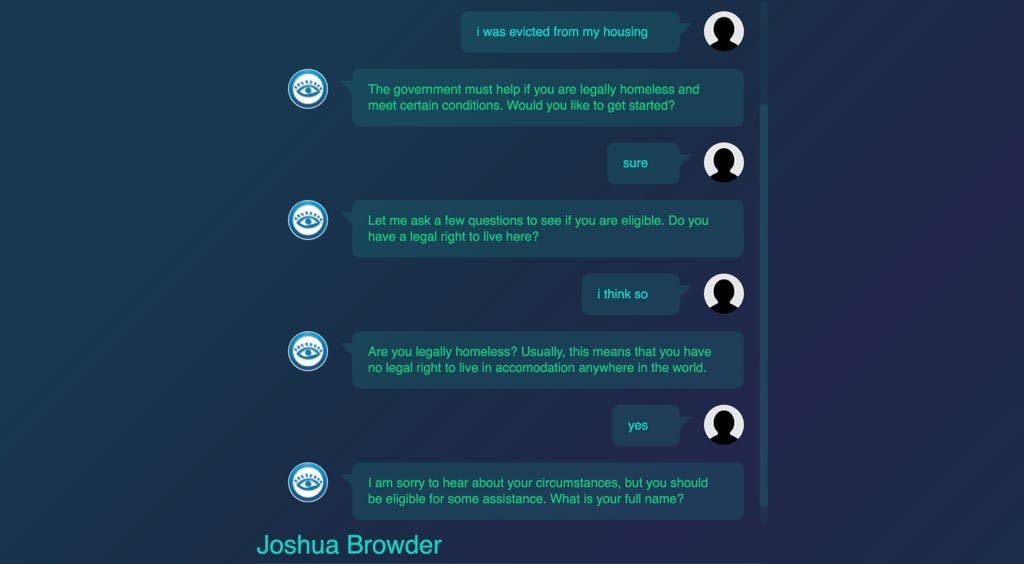 Evictions are at a record high in the UK, with 42,728 rented households forcibly removed last year, the Guardian reports. In five years, evictions increased 53 percent. Of the localities impacted by a lack of affordable housing and increasing evictions, 16 out of 20 were in London.

To figure out trends in accepted applications and create claim letters that will generate the most positive outcome, Browder analyzed 15 years of affordable housing application data received from a Freedom of Information Act (FOIA) request. He looked at what types of claims get approved and which don’t, and qualities that potentially increase an individual’s chances of approval.

For instance, Browder found that a pregnant woman has a 70 percent chance of approval within two weeks.

“Initially I thought best way to do it would be to program it with lots of individual responses,” he said. “The breakthrough came when I created a simple comparison technology, which allows the robot lawyers to compare against a database, rather than being keyword-based.”

The bot will ask personal questions relevant to the application—when you became homeless, if you’re pregnant, have mental illness or physical disability, and a variety of other personal information—and creates an application based on previous success rates. There are seven default claim letters, and the bot automatically chooses one and changes the personal information within them to apply to an individual’s situation. People still have to submit the application to government officials themselves, but DoNotPay simplifies the application process. 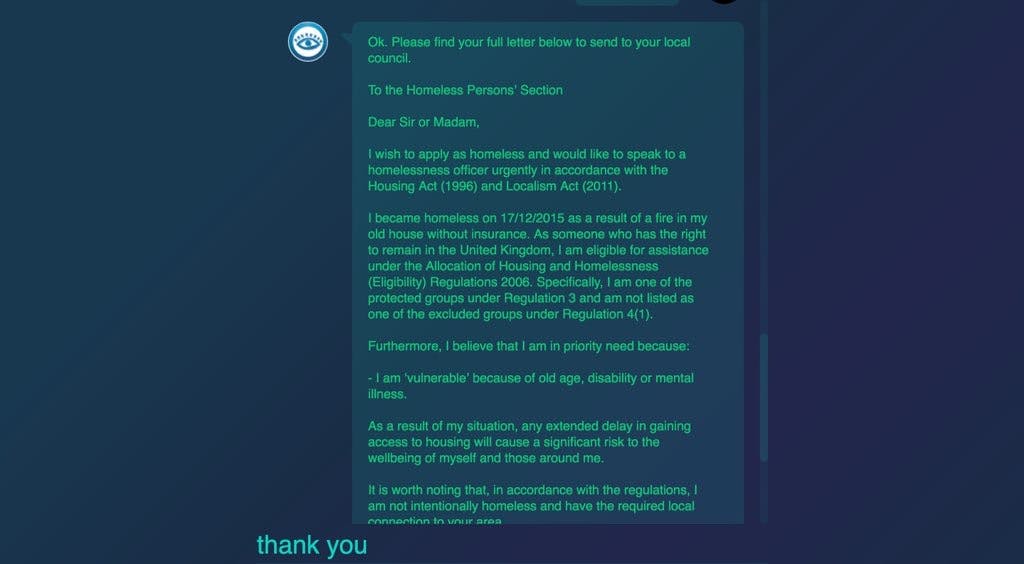 The site is accessible on mobile and the web, and Browder wants to eventually integrate SMS to improve accessibility for individuals that might not have access to data.

Browder hopes to expand to the U.S., but laws and programs surrounding homelessness vary by municipality. Additionally, the underlying causes are different, and programming a bot to automatically address them will mean adapting to various regulations and areas of the law.

Some advocates are wary of an automated solution, and as Shelly Nortz with New York’s Coalition for the Homeless told the Washington Post, a chat bot might not understand nuanced issues and create vulnerabilities for individuals applying for programs.

DoNotPay has no intention of removing human connection or making lawyers irrelevant; in fact the American Bar Association has reached out to Browder with their support for the project.

“I’m not looking to replace all lawyers,” he said. “Just ones that charge hundreds of dollars for copying and pasting legal documents.”

By automating the process for free, DoNotPay can provide some peace of mind for people unfamiliar with their options, and offer a potentially greater chance to be placed in housing. In the UK, nonprofits are receptive to the idea, and Browder is in talks to form a more formal partnership with Centrepoint, the country’s largest charity for homeless youth.