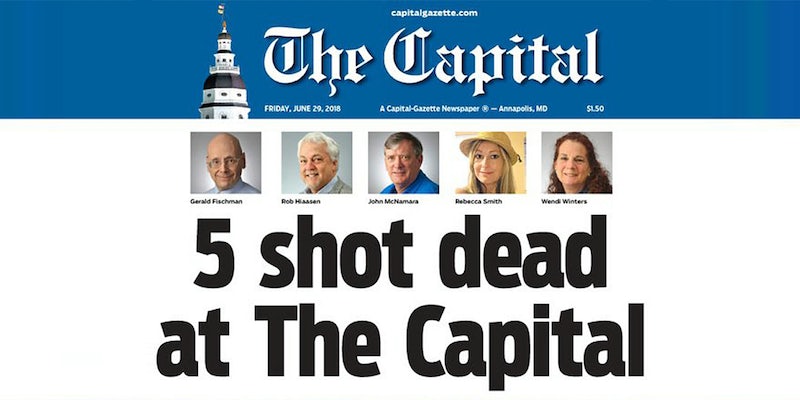 They got the paper out.

Journalists are no strangers to covering American mass shootings. But yesterday was different, with professionals facing a shooting in their own newsroom, when a gunman opened fire at the Capital Gazette in Annapolis, Maryland, killing five.

The shooting happened at 3:15pm ET. Immediately the newsroom started covering it.

Five people were killed and several others were “gravely injured” in a shooting at the Capital Gazette office, according to police. A shooter is in custody. https://t.co/ZTw7BuaNAk

And the staff promised to put out a paper.

Friday morning, the staff put out a paper about it. Here was the front page.

The dedication to the putting out the news in the face of such severe adversity blew other journalists away.

They put out a damn paper. https://t.co/S6ANgpXNjk

To experience such horror and still get the paper out – I’m in awe of this professionalism. #journalism https://t.co/zNjNlFLIhV

They got the fucking paper out. https://t.co/Ocyc7qd4LX

On the opinions page, the staff left it starkly empty, with the names of the colleagues they lost, saying that tomorrow they would be back at it. But today, they were “speechless.”

Tomorrow this Capital page will return to its steady purpose of offering readers informed opinion about the world around them. But today, we are speechless. pic.twitter.com/5HzKN2IW7Q

As the story resonated around the web, a GoFundMe for the paper picked up steam.

A verified GoFundMe has been created by journalist @MadiLAlexander to support victims of the tragic #CapitalGazette shooting. https://t.co/BMvgGlBIsT

Created by journalist Madi Alexander, the GoFundMe wants to “do whatever we possibly can to help them pay for medical bills, funeral costs, newsroom repairs, and any other unforeseen expenses that might arise as a result of this terrible shooting.”