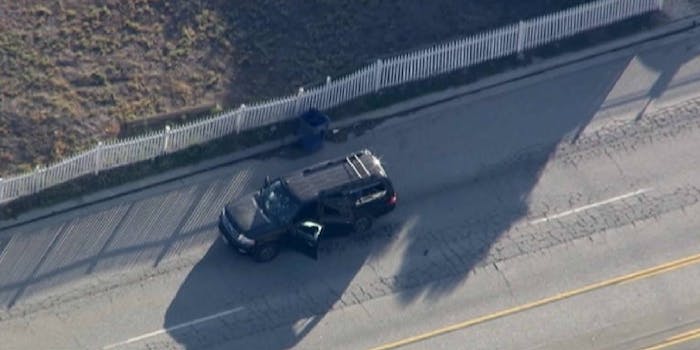 'I just cannot express at how sad I am for what happened today.'

Hours after 14 victims were killed and 21 injured in a mass shooting in San Bernardino, California, authorities have confirmed the identity of two suspects: Syed Farook, 28, a local resident and employee of the county health department.

The other suspect is Tashfeen Malik, 27, who is either his girlfriend or his wife, authorities said. Details about Malik including her occupation and nationality have yet to be determined.

Police say they don’t know what precipitated the mass shooting.

Farook is a U.S. citizen and has been described as “very religious” and a “Muslim” by his father, the New York Daily News reports.

Authorities have traced one of the assault rifled used in the massacre. They found it was legally purchased and not stolen, CNN reported, but they could not immediately give the name of the gun’s owner.

Farhan Khan, Farook’s brother-in-law, told media he is “in shock that something like this can happen. I just cannot express at how sad I am for what happened today. Why would he do something like this? I have absolutely no idea.”

Hussam Ayloush, executive director of the Council on American–Islamic Relations in Los Angeles, organized a press conference late on Wednesday evening to address the shooting.

“The Muslim community stands shoulder to shoulder with our fellow Americans in repudiating any twisted mindset that would claim to justify such sickening acts of violence,” Ayloush said.

Update 12:55pm CT, Dec. 3: San Bernardino police said at a press conference on Thursday that the number injured in Wednesday’s shooting rose from 17 to 21.