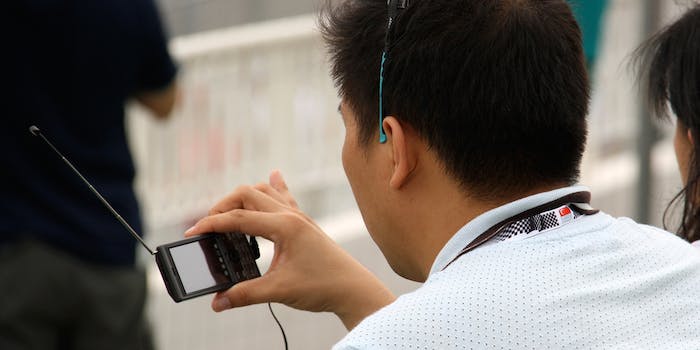 The 6 wildest Chinese cell phones—and how to buy them

Want a cheap phone that looks like a Porsche key? Of course you do.

If you have unconditional love for your phone, then we recommend ignoring this article altogether—things may never be the same between you and your phone again should you read. There are enough troubles in the world to tack on “my phone is boring” to that list.

On the other hand: If you’re already cynical about the state of our cell phones—and the fact that every cell phone in this country comes from a small bundle of repeat providers—this is a life-altering buyer’s guide.

While we may not have the most diverse lineup of cellular phones in the United States, or in anywhere in Europe or Russia, or in any of those icy countries with fantastic healthcare, there is a very specific place in the world that’s going delightfully bananas with its experimentation: Shenzhen, China. And it’s no coincidence that Shenzhen is the mecca of custom cell phones—Shenzhen summons a huge share of the global phone market.

There have been many reports of phone-manufacturing plants being torturous hellholes, with some literally surrounded by netting systems that keep suicide jumpers from hitting the ground below them. But there does seem to be at least one upside to doing some time in an Apple factory: You get very familiar with how cellular phones are built, and you get to take that knowledge with you when you leave the company. A haven of small businesses that are manufacturing lower amounts of cell phones, but are addressing their smaller output capabilities by making phones that the larger companies aren’t, comes next.

If all you need is a credit-card sized phone that’s only capable of calling and texting, then Shenzhen has you covered. If all you want is a simple phone that looks like a Porsche key, there is no app available that can make a Galaxy or iPhone physically change into one—but you can order one online for around $20.

Look the world is your oyster. You can have your iPhone and your Porsche-key phone, too, because the latter is obviously just awesome (and will work with your CIM card), and you’ve probably learned by now that taking the former to the lake, or maybe to a Dillinger Escape Plan show, can be heartbreaking.

But finding these custom phones to purchase online is not a one-step searching process—it’s at least a two-step process, and we all know that it’s extremely rare for anybody to Google that deeply before giving up and making a Facebook status about how frustrating everything is these days.

These manufacturers are small, so their distribution chain seems to go something like this: They sell bulk amounts of their phones on Alibaba and other similar sites, and then the phones show up in places like Chinese marketplaces or on eBay.

The following are six of the coolest phones in Shenzhen, and links to where you can buy them. 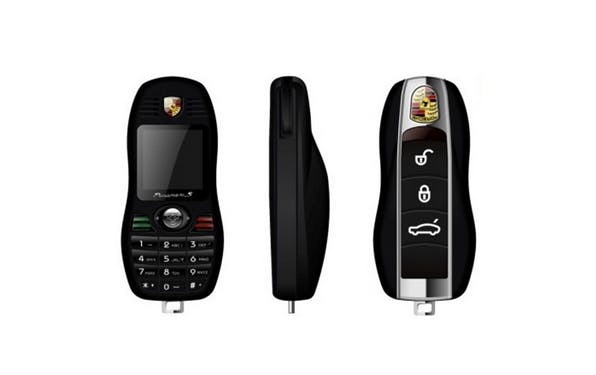 Despite being the size of a Porsche key, this phone somehow manages to support both MP3 and MP4 playback, bluetooth connectivity, and the ability to listen to FM radio. Shockingly, it also has a rear camera that’s capable of 0.3-1 MP, which might qualify it as a spy device (if you ever see somebody closely examining their Porsche keys in front of you, quickly cover your face and run). You can find this phone on eBay, from a seller who’s also offering the flip-phone version, and also loads of other car/phone mashup items. 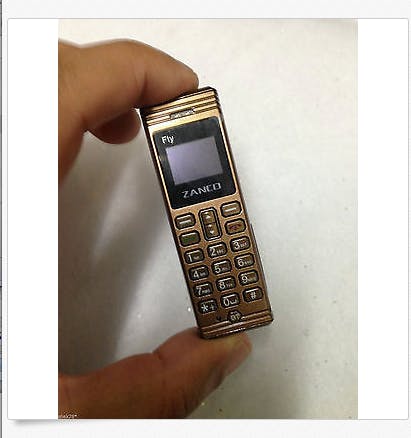 Claiming to not only be the world’s smallest phone, but also to be made of 100 percent pure plastic, it’s unclear as to who actually made the Zanco Fly Phone in the first place. It was originally called the Zini Fly Phone, but then Zini Mobiles Ltd. dissolved in June. Then Zanco Ltd. evidently folded a week later. They’re both technically companies in the United Kingdom, but neither filed records there, and their office was in Shenzhen.

The company’s sole director is probably smuggling in iPads or something, and the whole “phone company” thing is just them slapping their names on some marketplace phones and selling them on eBay. But! The Zanco Fly Phone’s biggest feature is a built-in voice changer with 13 different voices at its disposal. It’s no wonder that it’s so small, then: If the police were to find it on you, they’d know for sure that, yes, you were the person that was stalking that other person—so it’s very important that it’s small enough to swallow at a moment’s notice. You can own one yourself for around $50 via eBay, where all but a few of its 17 listings are from the same person—probably the company’s sole director, who owns 100 percent of what appears to be nothing.

Corporate issues aside, I still want one. It works globally, and even if it broke in two weeks, the calls made using the “Rapwoman” voice would be well worth the investment. 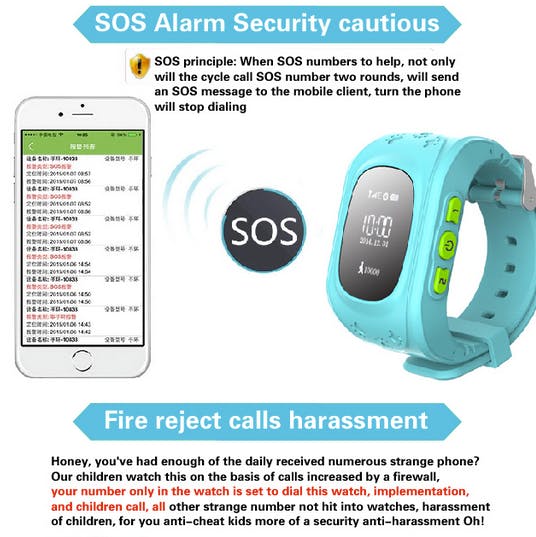 Or least that’s what it was called on Alibaba, anyway (it could possibly use a snappier name). This is the phone your kids need, and since you can pick one up for $41 (with free shipping), you really have no excuse to not have one. It has all the features necessary for hunting down any small child—with the mobile client available for your smart phone you can track your child via the GPS locator installed in the phone; set up an electronic fence that will trigger an alarm on your phone if your child wanders out of it (or removes the phone for more than three minutes); see how much walking they’ve done via a vibration scooter; and even spy on, er, monitor your children by calling the phone, which will answer and transmit a one-sided call from their end.

To protect children the watch is only able to answer and engage in two-way calling with two numbers that you enter into it. Your child will only be able to call these two numbers (by holding down one of two buttons for three seconds), which should also prevent “chaos chaos dialed calls” (which is the best term for “prank call” that’s ever existed). As an additional bonus to all this, the watch also displays the current time. It’s the absolute best device in existence for keeping your children safe and humanely spied on. 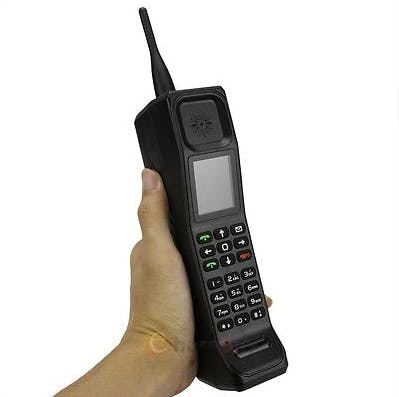 A few years back, an ’80s-style brick phone called the Motelona (a play on the old Motorola phone it was emulating) made waves across the Internet. It was so weird and impractical (and such a head-turner), that it became popular. Alas something must have happened to the Motelona brand, as an hour of searching yielded only a few results—and they were all pre-owned units from dubious sources. Even eBay seems to have banned the Motelona, perhaps due to a letter from Motorola (although it’s unclear if Motorola had anything to do with the brand’s disappearance at all), but it thankfully still has plenty of listings for new ripoffs of the original ripoff.

“Ripoff” might be a bit misleading, or at least with the Motelona—sure, the exterior design itself is the same as an old Motorola cell phone (sans the added LCD screen), but the ’80s version certainly didn’t support duel CIM cards, GSM network support, or the ability to play MP3s. It’s sad to not have the hilarious “Motelona” brand name printed under the LCD screen, but with the exception of that small detail, the models floating around are exactly the same thing. It’s a brilliant piece of wacky technology to take out every once in a while (and shock people when you say “yes, it really works,” and then call them from it), and especially for the $44 offer found from this eBay seller (who seems to have a warehouse full of them on hand). As an added bonus, the battery supposedly lasts for at least a month on standby mode, so you could always keep it in your glovebox as an emergency backup.

If Henry David Thoreau were alive today, this would be his phone—not only because of its simplicity, but because he could easily hide it in his wallet and nobody would have to know that he was cheating and using a telephone.

It has no camera, or any features besides texting, calling, and bluetooth capabilities. Like most of these phones, it comes unlocked and ready to accept any CIM card that will operate on a GSM network. (This is evidently true of any CIM card nowadays, but please Google your own provider and make sure your card will work on one of the four GSM bands that most of these phones connect to.)

Of all the phones on the list, this is probably the coolest, which is strongly correlated with the fact that it’s the cheapest. This eBay seller is offering them for $18.91, with free shipping from Hong Kong. It’s an impressive price when compared to another seller offering the phone at a similar price, but charging $100 for shipping. Also, this seller offers the phone in all its available color schemes—black, white, pink, blue, and green. The only downside is that you might not receive the phone until late September, but hey if you want to pay the $100 shipping to get it earlier, you can totally do that. 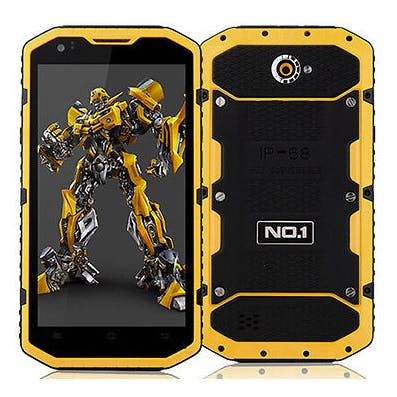 This phone isn’t messing around—just look at that Transformer on the screen. Whereas the other phones on this list have very specific abilities, this is a phone for the sort of jerk that wants their device to do everything, and especially stuff they’ll never understand. It’s very close to the phones you’d find on most Americans. It’s also dust-proof, scratch-proof, and shock-proof, and it’s IP68 certified—a waterproofing term that means you can probably drop it in the toilet without it breaking.

It also claims to have a 10-hour talk time, and a 180-hour standby time. It can also record video in 1080p, and supports 128GB of memory expansion. It also supports Bluetooth 4.0. It runs on an Android OS, but it’s 4.4. Its processors involve the words “Quad Core,” and this is where I’ll admit that I don’t know what this, or any of the other phone’s specs, actually mean.

But you can check them out yourself at this eBay page, where the phone is going for $222.99. It ships with an EU 100~240V power charger, which means the voltage is fine for U.S. charging, but you’ll probably have to buy a cheap plug adapter to fit it into a U.S. outlet.