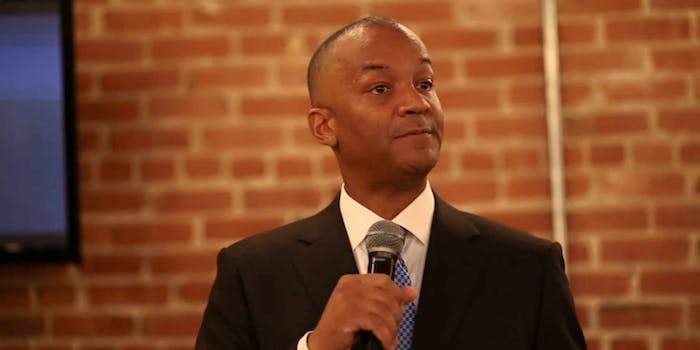 Oakland Port Commissioner Bryan Parker is using the Crowdtilt campaign as an example of democracy in action as he challenges current mayor Jean Quan.

Crowdtilt, a crowdfunding platform that allows funds to be used even if campaign goals aren’t quite met, reached a milestone of a different sort today: It launched the first crowdfunded mayoral campaign. Oakland Port Commissioner Bryan Parker is using the Crowdtilt campaign as an example of democracy in action as he challenges current mayor Jean Quan.

Parker launched the campaign, called “Tilt Oakland Forward,” as a way of not only celebrating the intersection of politics and technology, but as a way to measure his mayoral chances. If his Crowdtilt campaign can reach its goal of $20,000 between June 19  and June 29, it will be a quantifiable, public demonstration of support for his candidacy—enough to ensure that he runs for mayor in 2014.

So far, it’s working. In less than a day, Parker has already raised nearly $13,000 of the $20,000 goal. On the campaign’s page, Parker aligned crowdfunding on the Internet with new media-inspired progressive politics:

By using Crowdtilt to kick off my campaign, I aim to give every interested resident a chance to participate—instead of just the political insiders who have funded political campaigns in this town for far too long.

A former Obama campaign volunteer, Parker is the vice president of a Fortune 500 company. Ironically, he received his current political post as port commissioner from an appointment by fellow democrat Quan, whom he would be running against.

According to Steven Tavares at EBCitizen.com, Parker “may attempt to tailor his message to the city’s growing demographic of young professionals with money to burn.” So far, Parker seems to be actively courting that group; Movement50, the group spearheading his campaign, is a group of “young professionals” who decorate Parker’s campaign promo like Christmas lights on exposed brick:

Movement50 declares itself dedicated to creating social progress by fostering new community leaders and engaging in voter registration and community outreach. They’re goals that align nicely with the goals of crowdfunding and online fundraising—and Parker, a former digital media executive, is obviously more than aware of the intersection. “Oakland Forward,” the group’s slogan, seems to be the byword of local business owners and community groups—but it also serves as a handy campaign slogan. Oh, and it makes a decent hashtag, too.

Parker has 11 days to raise the remaining $7,000 for his campaign. Success seems inevitable, but even if he fails, his mayoral campaign is unlikely to be the last of its kind.

Get ready for a crowdfunded political machine in a city near you.