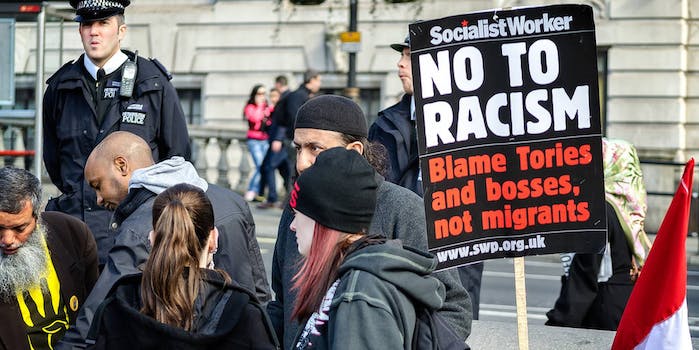 Last week's E.U. referendum has inspired some frightening examples of racism in the U.K.

Following last week’s Brexit referendum, when British voters decided by a close margin to leave the European Union, the United Kingdom has plunged into political turmoil.

While the U.K. hasn’t officially left the E.U. (and may not do so for a couple of years, if ever), the decision is already affecting people from all walks of life, from the plummeting stock market to a surge in racist harassment across the country.

The referendum incorporated a complicated web of political issues, but both sides of the campaign focused heavily on the issue of immigration. As in the U.S., this drive for stricter border controls often went hand in hand with xenophobic rhetoric about migrant workers and refugees.

Scenes of anger and hatred on Britain's streets after Brexit.

The conflict between the Leave and Remain campaigns did not fall strictly along party lines, with both sides receiving support from conservative and progressive politicians. However, the Leave campaign—and the referendum itself—was kicked off by the rise of the U.K. Independence Party (UKIP), a rightwing populist party that has been embroiled in numerous racist scandals.

In the days after the referendum, it seems that Britain’s “Leave” vote has encouraged racists to come out of the woodwork. The islamophobic far-right English Defense League clashed with anti-fascist protesters in Newcastle, and the weekend saw numerous social media posts about racist harassment in public places.

People have started to send these incidents to the Twitter account @PostRefRacism, which collates and shares examples of post-referendum racism. The goal of the account is “to take action against racism and tackle the creeping normalization that this referendum has accelerated.”

"Go back to your country" really starting to get old.. #PostRefRacism ^KS https://t.co/3Wc31mRB1J

I've lost count of number of South Asian friends subjected to racist abuse on streets of UK since Thurs. Thank you #Brexit

Some elements of the U.K.’s racial tensions will feel familiar to U.S. readers: islamophobia is a major problem, people are frightened about migrants “stealing their jobs,” and there’s a lot of media coverage about refugees and migrants trying to cross the English Channel from the “Calais Jungle” refugee camp in France.

However, there’s also a great deal of racist sentiment aimed at European migrants, particularly those from central and eastern European countries like Poland, Romania, and Bulgaria. When the U.K. opened its borders to Romanian and Bulgarian migrant workers in 2014, UKIP claimed the country would be flooded with 29 million immigrants.

This “flood” failed to materialize, and the immigration figures barely shifted from the year before, but the sentiment remained. The Brexit referendum had the unintended consequence of inspiring people to put up posters reading “No more Polish vermin,” and demanding that E.U. citizens “go home.”

This weekend I and my family have witnessed 3 "when are you going home?" Racist incidents aimed at EU citizens here.

Boris Johnson, the leader of the Leave campaign and a likely candidate to replace David Cameron as prime minister, is yet to comment on the apparent surge in racist abuse across the U.K. He’s probably distracted by the very real danger of another recession and his ambitions of a power grab going up in smoke.