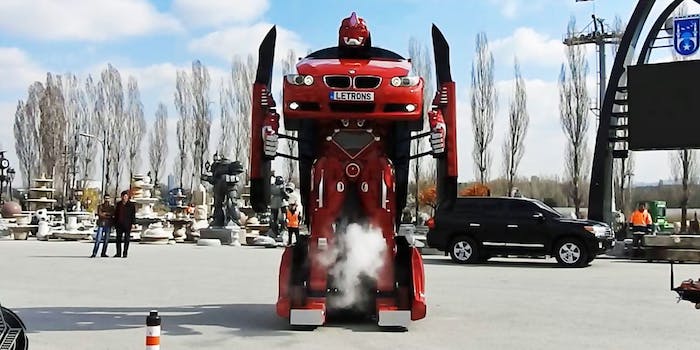 Watch this full-sized BMW transform into a giant robot

You won't believe your eyes.

The Transformers movies have really spoiled us when it comes to cars and trucks dynamically transforming into colossal robots, but that kind of thing just isn’t possible here in the real world—or is it?

Letvision is a company that builds real, full-sized transforming vehicles called Letrons, and up until now it’s only been able to showcase smaller tests of how its in-progress transformers might work. That all changed this week when the company released a ridiculously cool video revealing just how its massive RC robots are shaping up.

As you can see in the right side of the frame, the BMW-bot is being controlled remotely, and when the vehicle “drove” itself forward, it was actually just acting as a larger-than-life R/C car.

Letrons’ bots have a whole list of surprising features—aside from the fact that they’re literally full-sized luxury cars that transform into robots—including dynamic lights, moving arms and wrists, a built-in fog machine for added effect, and even a voice box and camera system to make it seem sentient.

The company plans to eventually make these ridiculous creations drivable in the real world, which would add a whole new level of insanity. If you’re hoping to purchase one for yourself, you’ll have to prove to the company that you’re worthy and responsible enough to own a giant robot, and then pay the currently undisclosed asking price—it’s probably really, really high.