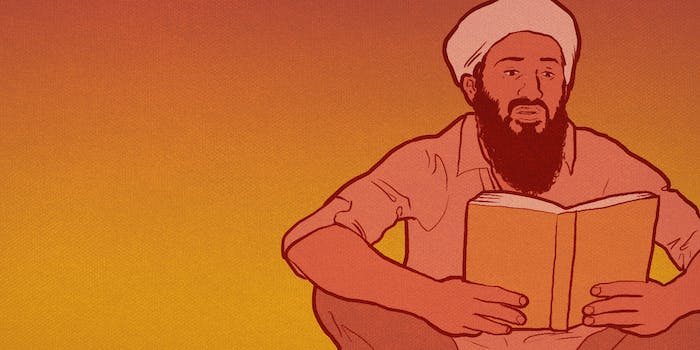 If you’ve ever wondered what Osama bin Laden was reading right before he died, you’re in luck.

Earlier this month, investigative journalist Symour Hersh published a bombshell story in the London Review of Books, charging that virtually everything the world knew about the death of Osama bin Laden was a lie. Hersh wrote that bin Laden had been a captive of the Pakistani government for years and, when U.S. forces raided the Abbotabad compound where the terrorist leaders was killed, no actionable intelligence was obtained because the building was essentially a jail cell.

In *cough* completely unrelated news *cough*, the Office of the Director of National Intelligence (ODNI) launched a website on Wednesday listing many of materials it says were obtained during the raid on bin Laden’s compound.

ODNI spokesperson Jeffrey Anchukaitis insisted this release had nothing to do with any recent media coverage. “Rather, with DNI approval, CIA spearheaded a rigorous interagency review of the classified documents under the auspices of White House’s National Security Council staff,” he said in an email. “The effort began last summer and continues on as we speak.”

The site, called Bin Laden’s Bookshelf, doesn’t contain all of the reading materials the Al Qaeda leader reportedly had with him at the time of his death. Buzzfeed notes that most of the documents obtained from the compound were scanned pages from London-based pan-Arabic newspapers al-Hayat and al-Quds al-Arabi. The materials listed on the Bin Laden’s Bookshelf site are all of the trove written in English.

There’s a lot of fascinating stuff here—although, of all the ways the Obama administration could have provided evidence backing up its version of the events, this one is probably just about the least independently verifiable.

The book that’s the immediately the most eye-catching is New Pearl Harbor: Disturbing Questions about the Bush Administration and 9/11 by David Ray Griffin. A retired philosophy professor and theologian who founded the Center for Process Studies at the Claremont School of Theology, Griffin is a leading figure in the “9/11 Truth” movement, which asserts the United States government, and not Al Qaeda, was responsible for the terrorist attacks on Sept. 11, 2001.

The book’s title refers to a line in a document released one year before the attacks by the neoconservative think tank Project For A New American Century—whose ranks included future prominent George W. Bush administration officials like Dick Cheney, Donald Rumsfeld, and Paul Wolfowitz. The document asserted that the group’s goal of remaking the Middle East through a program of U.S.-led regime change could be facilitated by a foreign attack on American soil, a “new Pearl Harbor.”

Griffin’s book, the first of nearly a dozen he would go on to write on the subject, charged the 9/11 attacks were “false flag” operations conducted by the U.S. government as a way to galvanize the American public into supporting an invasion of Iraq.

Griffin also served as a script consultant on the cult 2007 film Loose Change: Final Cut, which made similar arguments about 9/11 being an inside job.

“The main reason Americans evidently reject the idea that 9/11 was an inside job, in spite of all the evidence, is the belief that ‘our leaders simply would not do something so evil,'” Griffin said in a 2012 interview with Alternet. “I have long been aware that seemingly decent human beings are capable of terrible evil, and my study of American history shows that our leaders are no exception.”

Other books full of things one would expect the Al Qaeda leader to already know—or, at the very least, know aren’t true—are Al-Qaeda’s Online Media Strategies: From Abu Reuter to Irhabi 007 by Hanna Rogan and I. A. Ibrahim’s A Brief Guide to Understanding Islam, an introductory-level guide to Islam for non-Muslims.

Many of the English-language books listed on Bin Ladin’s Bookshelf center around shadowy conspiracies involving the United States. There’s John Perkins’s Confessions of the Economic Hitman, a first-hand account of how the American government teams with private corporations to screw developing nations by encouraging them to take out large loans for boondoggle infrastructure projects, most of the profits from which flow right back to U.S. coffers. There’s also Bloodlines of the Illuminati, which will, according to the book’s description on Amazon, show “who actually runs the New World Order conspiracy, and who is in the Illuminati.”

In addition, the list contains books like The 2030 Spike, which forewarns of a coming global environmental apocalypse, John Coleman’s Conspirators’ Hierarchy: The Committee of 300, about a cabal of powerful families that secretly run the world, and Obama’s Wars by Bob Woodward. There are also several books by noted liberal intellectual and American foreign-policy critic Noam Chomsky.

“Of the 38 full-length English-language books he possessed, about half were conspiracy theory books about the Illuminati and Freemasons, conspiracy-laden histories or explanations of alleged hidden inner workings of the U.S. military industrial complex, unseen workings of Western economies, and the like,” said ODNI’s Anchukaitis. “Bin Ladin almost certainly closely read these books—he recommended 10 or more of them in his public statements. Bin Ladin routinely publicly referred to a global conspiracy of ‘Crusaders’ and ‘Zionists’ who waged an overt and covert war against Islam. We suspect bin Ladin was interested in learning all he could about the West’s view of 9/11.”